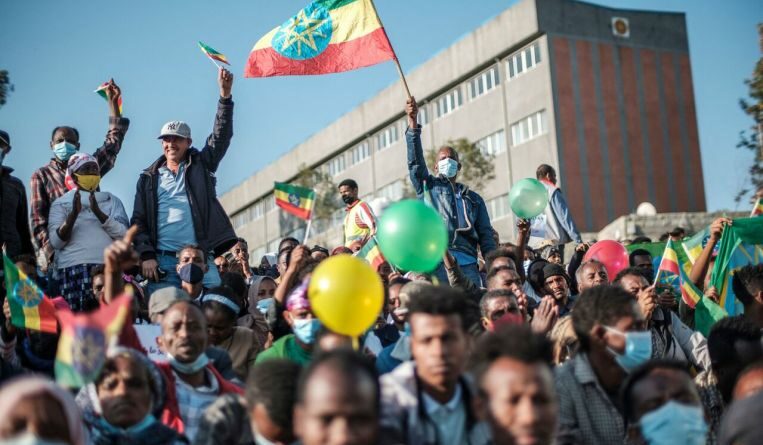 ADDIS ABABA (AFP) – Rebels fighting Ethiopia’s government have played down reports that they would face a hostile population or cause a “bloodbath” if they advanced into Addis Ababa, even as tens of thousands joined a pro-military rally in the capital on Sunday (Nov 7).

Fighters from the Tigray People’s Liberation Front (TPLF) and their allies have been locked in a year-long war with the government that has killed thousands and pushed many more into desperate conditions in the vast east African nation.

But the TPLF and their allies have claimed several victories in recent weeks, taking towns some 400 kilometres from the capital, and have not ruled out marching on Addis Ababa.

“The story that the population in Addis is vehemently opposed to us is absolutely overstated,” TPLF spokesman Getachew Reda told AFP in an interview on Saturday night.

“Addis is a melting pot. People with all kinds of interests live in Addis. The claim that Addis will turn into a bloodbath if we enter Addis is absolutely ridiculous.”

While the rebels would enter Addis Ababa to overthrow Mr Abiy, he said taking the capital was not “an objective”.

He also said the TPLF, which dominated Ethiopia’s politics for nearly 30 years until Mr Abiy came to power in 2018, had no desire to take back power.

Several countries have urged their nationals to leave Ethiopia and the US has withdrawn diplomats as the year-long conflict in the north escalates.

The government, which has denied the capital is under threat, has nevertheless declared a national state of emergency and Addis Ababa authorities have asked residents to organise to defend the city.

Pope Francis told crowds at the Vatican on Sunday he was watching the conflict “with concern” and hoped “the peaceful path of dialogue” would prevail.

But tens of thousands joined a pro-military rally on Sunday where attendees poured scorn on diplomatic efforts to end the conflict, spearheaded by US official Jeffrey Feltman who arrived in the country on Thursday.

Addis Ababa mayor Adanech Abebe said in a speech that Ethiopia’s foes were trying to “terrorise our population”.

Several Addis Ababa residents said on Sunday they did not fear the TPLF.

“They won’t come to Addis because I believe the military can destroy them,” said clothing vendor Kebede Hailu.

The TPLF overthrew the Marxist Derg regime in 1991 and ruled until 2018, when Mr Abiy took over.

Tension between the government and the TPLF simmered until November last year, when Mr Abiy sent the army into Tigray to remove the TPLF-led regional authorities, accusing them of attacking military bases.

He declared victory a few weeks later, but in June the TPLF retook most of Tigray including the capital Mekele, and it has since moved into neighbouring Afar and Amhara regions.

Last weekend, the rebels said they had taken two strategic towns in Amhara.

Mr Reda told AFP the rebels had since advanced further south towards Ataye, a town 270 kilometres north of the capital, and east towards Mile, a town on the road to Djibouti that is crucial for supplies to Addis Ababa.

The TPLF has said it is now running “joint operations” with another rebel group, the Oromo Liberation Army, which predicted Addis Ababa could fall in a matter of weeks.