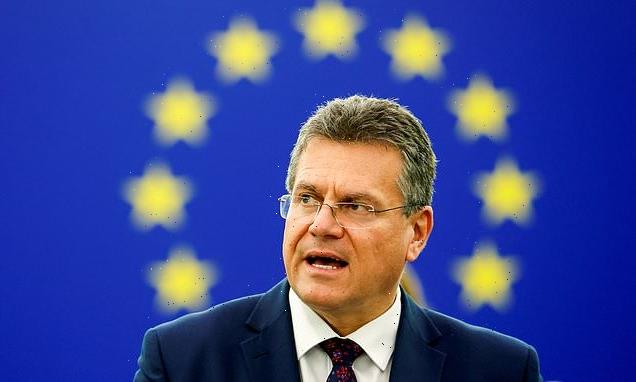 Brussels has accused the UK of seeking a ‘path of confrontation’ over Northern Ireland and fishing rights in the post-Brexit era.

‘I am increasingly concerned that the UK Government will refuse to engage with this and embark on a path of confrontation,’ he said.

Lord Frost meanwhile has claimed the EU has ‘destroyed cross-community consent’ with its overly strict enforcement of the Northern Ireland Protocol, which he believes is beginning to damage the Good Friday Agreement.

Such accusations come at the start of a week of fresh negotiations, culminating in a meeting between Sefcovic and Frost on Friday.

It comes as Emmanuel Macron announced France will introduce border and port blocks on British ships from Tuesday unless Boris Johnson is prepared to stand down in their bitter row over post-Brexit fishing. 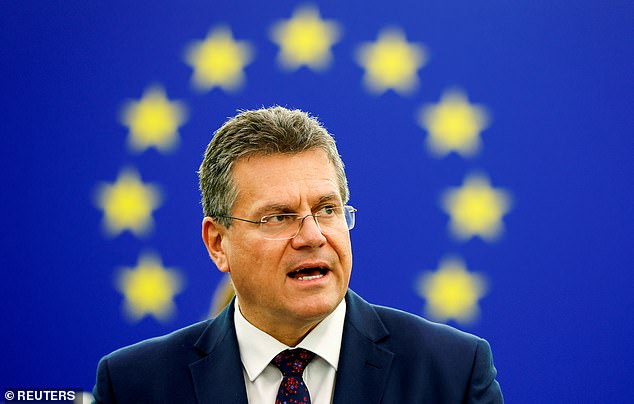 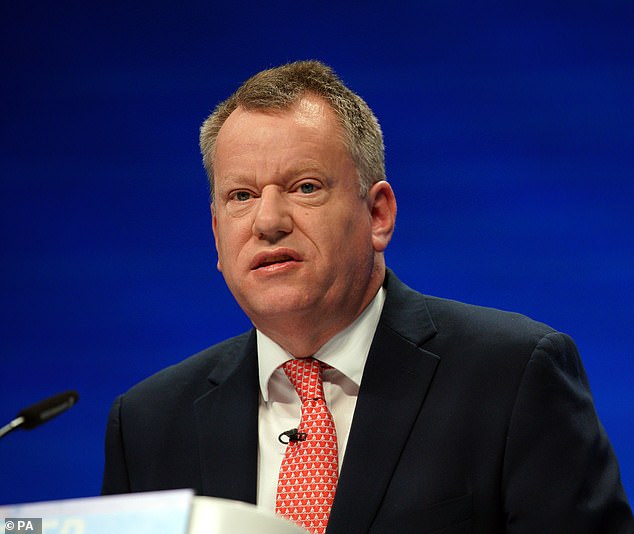 Last month the UK and the EU put forward proposals to address the dispute over the Northern Ireland Protocol, which was negotiated by Lord Frost. Frost has since accused the EU of ‘destroying cross-community consent’ by harshly enforcing the protocol

But unionists want it scrapped due to the trade barriers it has created on products crossing the Irish Sea.

Sefcovic, the EU’s lead negotiator, said that talks over the protocol are at risk because the EU will only compromise its position so far.

He said: ‘With the EU’s package of enhanced opportunities from this October, we have gone the extra mile. But we have our limits, too, as we must protect the integrity of the EU’s Single Market and the interest of the 27 member states.’

Meanwhile, Lord Frost said in a Policy Exchange think-tank paper published over the weekend that Brussels is behaving ‘without regard to the huge political, economic and identity sensitivities’ involved in Northern Ireland.

He declared the EU’s operation of the Protocol ‘has begun to damage the thing it was designed to protect – the Belfast Good Friday Agreement’.

‘The insistence of the EU on treating these arrangements as like any other part of its customs and single market rules, without regard to the huge political, economic, and identity sensitivities involved, has destroyed cross-community consent well before the four-year mark,’ he wrote.

‘We also have the lived experience of aspects that are simply unsustainable in the long-term for any Government responsible for the lives of its citizens – like having to negotiate with a third party about the distribution of medicines within the NHS.

‘That is why we must return to the Protocol and deliver a more robust, and more balanced, outcome than we could in 2019. I hope the EU will in the end join us in that.’ 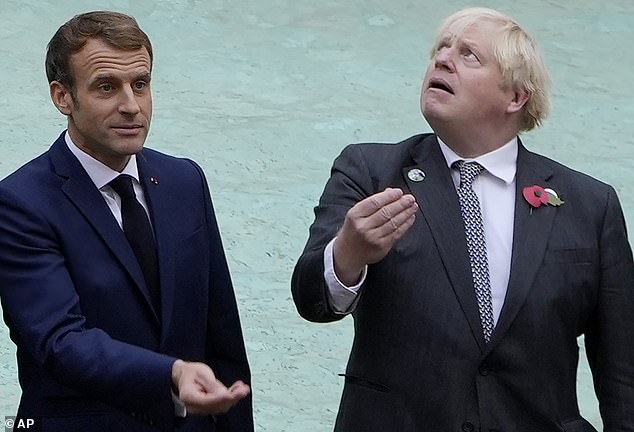 The accusation from the EU comes as Emmanuel Macron announced France will introduce border and port blocks on British ships from Tuesday unless Boris Johnson is prepared to stand down in their bitter row over post-Brexit fishing.

Last month the UK and the EU put forward proposals to address the dispute over the Protocol, which was negotiated by Lord Frost.

The Policy Exchange paper – The Northern Ireland Protocol: The Origins of the Current Crisis, by Roderick Crawford – provides a chronology of Brexit negotiations and what went wrong in 2017.

It argues that commitments, particularly on the Irish border, in the 2017 joint report were ‘a diplomatic triumph for Ireland and the (European) Commission’ but ‘failing to secure adequate reciprocal concessions was a staggering failure for the UK’.

Mr Crawford says the joint report – and what it committed the UK to – led to a flawed February 2018 draft withdrawal agreement and the subsequent November 2018 Withdrawal Agreement.

The paper says that led to the fall of Theresa May’s government in 2019 and ‘tied the hands’ of the new Government led by Boris Johnson that year as it renegotiated the terms of Brexit.

‘The ball is in Britain’s court’: Macron warns France WILL retaliate on Tuesday with border and port blocks unless Boris Johnson backs down in bitter fishing rights standoff – after PM DENIES claims he did a deal in ‘frank’ one-on-one showdown at G20

Emmanuel Macron yesterday warned that France will retaliate on Tuesday unless Britain backs down in the fishing row – after Boris Johnson denied they had done a deal to resolve the bitter dispute.

The French president insisted that unless the UK shifted reprisals will happen within days, saying ‘the ball is in Britain’s court’.

The combative stance came after at a press conference at the end of the G20 summit in Rome – after Mr Johnson told his own briefing for journalists that the UK ‘position is unchanged’.

Boris Johnson said he was ‘puzzled’ by a letter from French prime minister Jean Castex to European Commission president Ursula von der Leyen, in which Mr Castex said the UK should be shown ‘it causes more damage to leave the EU than to stay in’.

At a G20 press conference, Mr Johnson said: ‘On fish, I’ve got to tell you the position is unchanged. And I’ll just say this, for the record. I must say I was puzzled to read a letter from the French Prime Minister explicitly asking for Britain to be punished for leaving the EU.

‘I just have to say to everybody I don’t believe that that is compatible either with the spirit or the letter of the Withdrawal Agreement or the Trade and Cooperation agreement, and that’s probably all I’ll say about that one.’

But Mr Macron said: ‘The ball is in Britain’s court… ‘If the British make no movement, the measures of November 2 will have to be put in place.’ 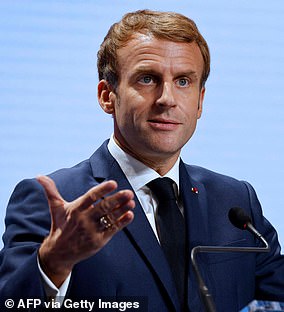 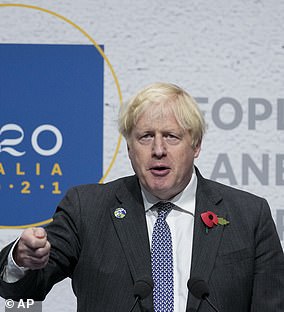 At a press conference at the end of the G20 summit in Rome, Boris Johnson insisted his ‘position is unchanged’ after speaking with Mr Macron for more than 30 minutes on the margins

Who is Nadiya Bychkova? Strictly professional and Playboy magazine cover star – The Sun