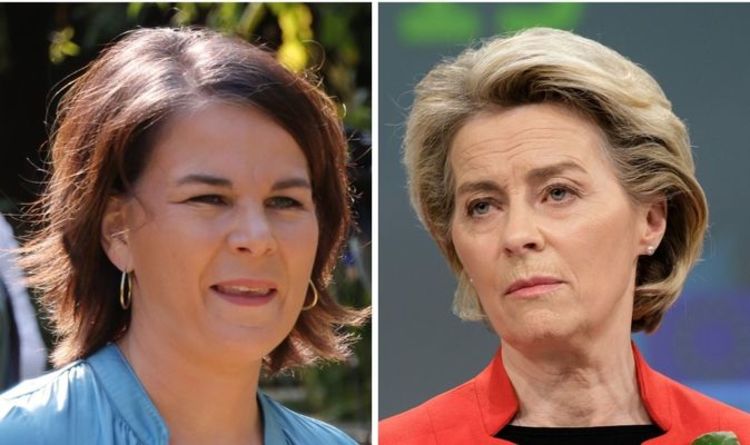 Germany election: Katya Adler on importance to US and EU

Germans today cast their vote for a new Chancellor and, potentially, a new government. Chancellor Angela Merkel officially steps down from her role at the helm after 16 years in power. While she will stay on until a new coalition government is formed, her time in the top job is no more.

Many have noted that Germany’s so-called “golden years” could well be over, the country braced to enter a new “Dutch-style” political era.

As polls closed this afternoon, the results were too close to call.

The Social Democratic Party of Germany (SPD) and the ruling Christian Democratic Union of Germany (CDU) were on 25 and 26 percent of the vote respectively, according to one exit poll.

This is good news for The Greens, political analysts say, as the party has secured a predicted 15 percent of the vote and can now go either way — with the SPD or the CDU.

The SPD or CDU would likely need to strike an alliance with The Greens to form a coalition government.

This, said Dr Alim Baluch, a professor who specialises in German politics at the University Bath, would cause a headache for the EU.

In recent years, Brussels has come under fire for its record in the environment.

Most recently, the bloc’s use of fishing super-trawlers was condemned after the Netflix documentary, ‘Seaspiracy’, exposed many of their malpractices in the world’s oceans.

JUST IN: What the Germany election result means for UK trade

Dr Alim Baluch said The Greens would likely push Brussels on the environment more than Mrs Merkel has, and told Express.co.uk: “Yes they will pile on the pressure.

“In recent years, the EU hasn’t had a very strong record on the environment.

“A Green government will enhance that pressure, although they are today no longer The Greens of the Eighties in Germany.

“Now, you have normal politicians that are very flexible.”

He added that when the modern EU launched in the Nineties, you could “see that European integration benefited the environment quite a lot”.

He said: “In the Eighties, the Rhine was almost a dead river, and forests were dying — Western Europe didn’t look much better than Eastern Europe in terms of environment and the impact of industrial pollution.

“New laws were passed as a reaction to the strong environmental movement, and the environment improved dramatically.”

While the EU helped to rekindle Europe’s environment, it appears to have ignored the rest of the world.

Its Common Agricultural Policy (CAP) has been the focus of the degradation.

Africa has been devastated by the CAP, as countries on the continent are plied with subsidised food to the demise of native farmers who struggle to compete with the low prices.

Atiku Abubakar, the former vice president of Nigeria, in a 2018 piece for Express.co.uk, wrote how Brexit could be “a force for good” for African nations pitted against the EU.

He said: “The EU’s single market is a great example of free trade but where it becomes a case of fortressing Europe against the rest of the world then free trade suffers.

“It imposes high tariffs, particularly on agricultural products but also minerals which punish countries such as Nigeria, preventing us from turning ourselves into an economic powerhouse.”

Mr Abubala spoke of how Nigeria, a country that employs 70 percent of its workforce in agriculture, was being hit by EU tariffs on things like sugar cane and rice.

Brian Denny, a spokesman for Trade Unionists Against the EU, in a blog post published a few years ago argued that “the EU starves Africa”.

He said the EU’s “criminal” CAP piles Africa with subsidised food at the demise of the continent’s farmers.

Oxfam has also previously warned over the programme, with Claire Godfrey, trade policy adviser for the charity, having said in 2011: “Not only does the Common Agricultural Policy hit European shoppers in their pockets but strikes a blow against the heart of development in places like Africa.

“The CAP lavishes subsidies on the UK’s wealthiest farmers and biggest landowners at the expense of millions of poorest farmers in the developing world.

“The UK Government must lobby hard within the EU to agree to an overhaul of the CAP by 2008 to put an end to the vicious cycle of overproduction and dumping.”

The Greens have been particularly vocal on the EU’s CAP and Germany’s own position on the environment.

They have long campaigned for the country’s farming sector to adapt to new environmental standards — much to the industry’s dismay.