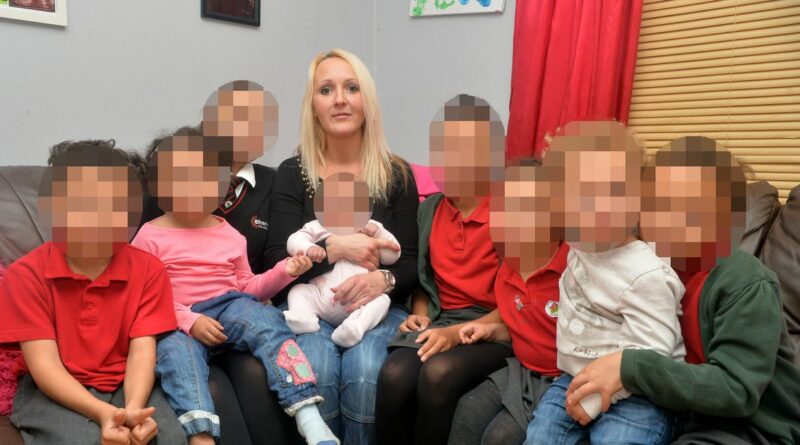 A mum-of-eight thought she was "going to die" after she was rushed to hospital with Covid, forcing her to leave her children at home.

Marie Buchan, a former lap dancer, tested positive for Covid on Saturday, January 9, and after her condition worsened she was taken to hospital.

The 39-year-old, nicknamed Octomum, said she began to fear for her life after she lost her sense of taste and smell and developed a cough.

She also had severe vomiting and suffered from nose bleeds, which forced her to set-isolate upstairs as her children, aged 6 to 18, looked after themselves.

Marie was admitted to Birmingham's Queen Elizabeth Hospital and said she had "lots of concerns and fears," including not "pulling through."

She also told her spokesman, Barry Tomes, that she suffered severe hallucinations, before being discharged.

"She had lots of concerns and fears about not pulling through. It did go through her mind… she told me I thought I was going to die. and I know I could die from this.

“We don't talk about the mental side of having Covid. You get weird hallucinations and it plays games with your mind.

"When you're ill with it you get prepared to die – she has said similar things to me."

Marie is reportedly still "feeling really bad" and can’t shake the vomiting, leaving her unable to keep a glass of water down.

Mr Tomes said the mum had never experienced anything like Covid before and seeing the reality of Covid left her feeling "distressed."

Marie told Mr Tomes: "She said the hospital is so under pressure with Covid patients. She was quite distressed seeing other people in a worse way with Covid than herself.

"She is still feeling really bad. Her sense of taste and smell has come back but she can't shake the nose bleeds and vomiting. She can't keep a glass of water down.

"I have never seen her so rough. Like all mums she just cracks on with things, she's never had anything like this before."

She hit the headlines when she appeared on TV on the Channel 5 show Benefits Britain: Life On The Dole in 2016, in which she claimed to work 21-hour days looking after her kids.

In 2019, Marie saved up for a boob job through car boot sales and part-time work to cover the boob op rather than dip in to her benefits.

Sparking more controversy just before Christmas, Marie announced plans to jet off to Spain because she "needed a break".

An American lynching: ‘I could hear their screams’

SpaceX news: EU to boost their space exploration to keep up with China and US