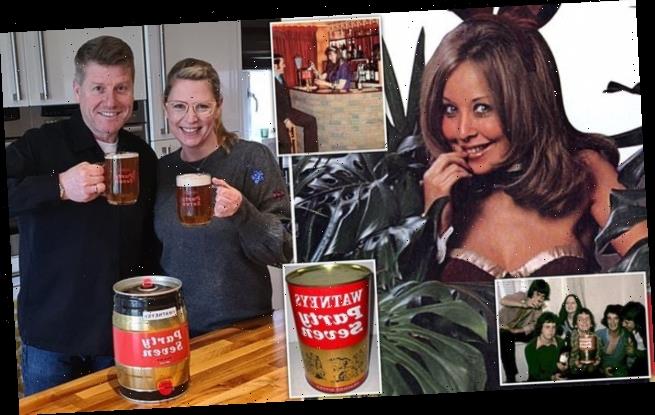 Roll out the barrel… again! Exploding 1970s favourite Watneys Party Seven is back – but now you don’t need a screwdriver to open it

It was among the least welcome sights at a Seventies party, along with Hirondelle wine and your friend’s collection of Boney M records.

But, to the probable dismay of many, Watneys Party Seven is making a comeback.

Despite being promoted in TV adverts by the likes of Michael Caine and Peter Cook, the large red and gold can was ridiculed at the time for the bland, fizzy ‘draught’ bitter inside.

It was also notorious for spraying beer all over the kitchen when punctured with a tin-opener – or, in desperation, a screwdriver. That was unless you wanted to buy a special tap that cost the equivalent of £40 at today’s prices.

The barrel-shaped seven-pint can disappeared in the Eighties with the advent of the six-pack – individual ring-pull cans that were frequently used as makeshift ashtrays – but is clearly still fondly remembered by some.

The good news for drinkers is that the new mini-keg, which contains 5 litres, or 8.8 pints, incorporates a tap to avoid mess, while the makers promise the beer has been improved to reflect today’s taste for craft ales. 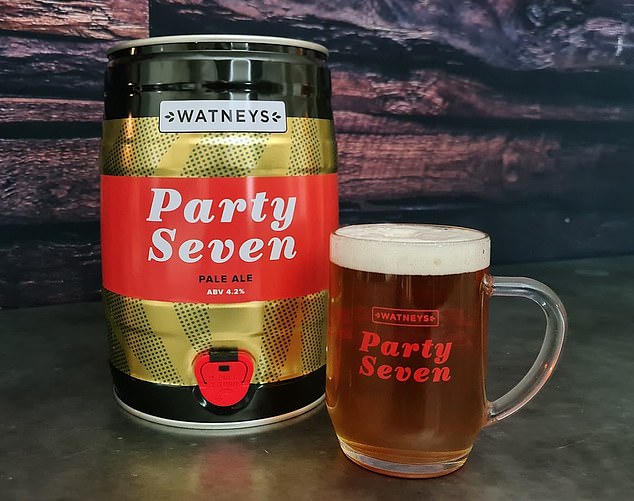 It’s back, but not as you know it: To the probable dismay of many, Watneys Party Seven beer is making a comeback in a new mini-keg, which contains 5 litres, or 8.8 pints, and incorporates a tap to avoid mess 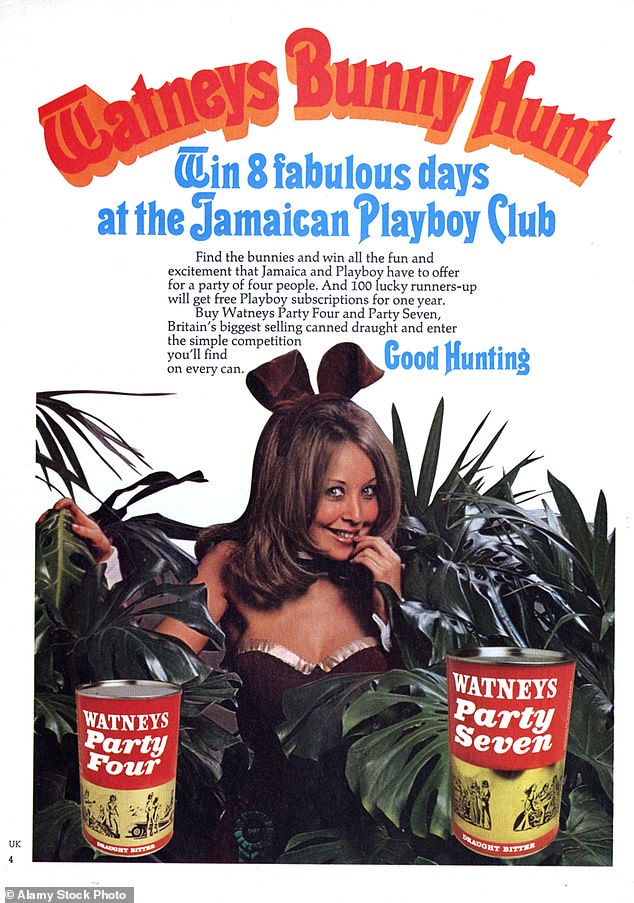 It was among the least welcome sights at a Seventies party, along with Hirondelle wine and your friend’s collection of Boney M records. Pictured: A 1970s Party Seven advertisement 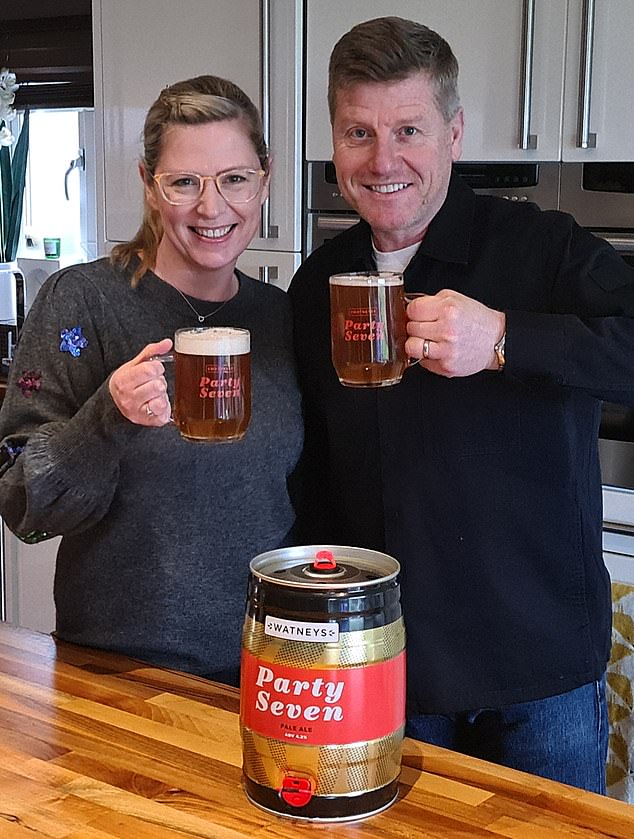 One fan of the new Party Seven is Daily Mail reader Justin Barry, 55, and wife Alison, 48, who said: ‘It’s quite nostalgic. It reminds me of going to Christmas parties in the 1970s. I remember following my dad as he carried a Party Seven under his arm’ 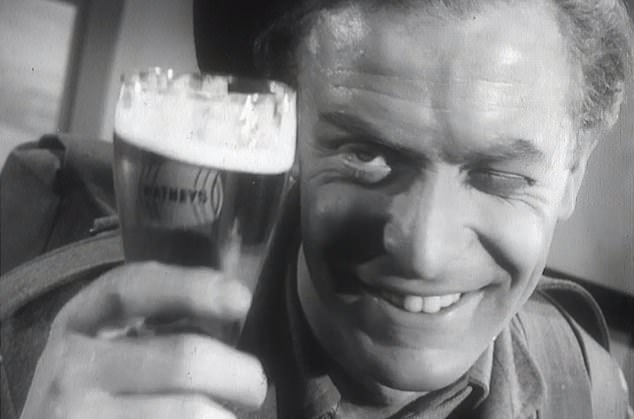 Despite being promoted in TV adverts by the likes of Michael Caine (pictured) and Peter Cook, the large red and gold can was ridiculed at the time for the bland, fizzy ‘draught’ bitter inside

It is also stronger, with an ABV of 4.2 per cent rather than the original 3 per cent.

However, the sobering news is that the revamped Party Seven costs around £25 – compared with just £1 in 1974.

It has been launched by Nick Whitehurst, who with two friends helped revive the Watneys brand five years ago.

They began producing a range of craft beers with names such as Sarcasm and Irony – to reflect Watneys’ previous image problem.

Beer critics who derided Party Seven in the Sixties and Seventies had been even more scathing about another Watneys product, Red Barrel, a keg beer sold in pubs.

The rise of real ale saw the brand fade from view, until Mr Whitehurst came along. 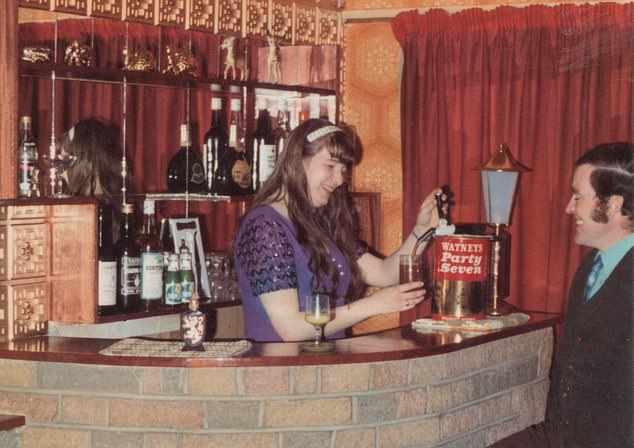 Beer critics who derided Party Seven in the Sixties and Seventies had been even more scathing about another Watneys product, Red Barrel, a keg beer sold in pubs 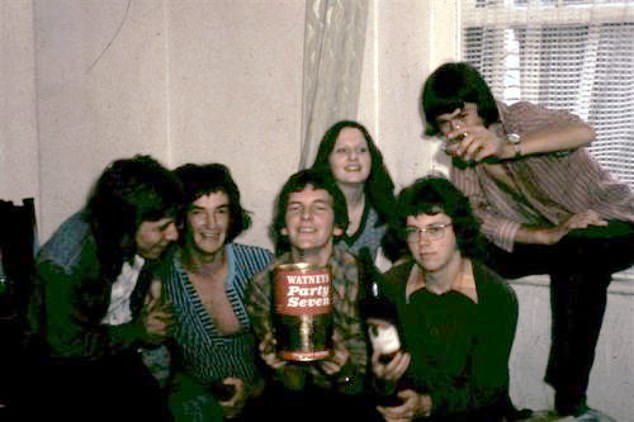 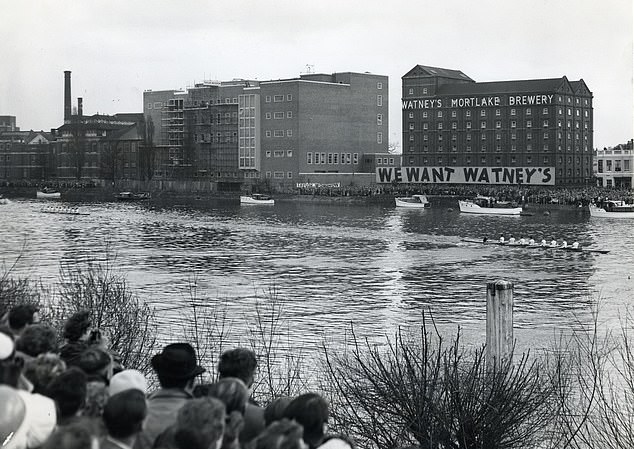 Watney’s Mortlake Brewery, seen here during the boat race of 1959. Pictured is a sign saying ‘We Want Watneys’

An original Watneys brewer, Philip Downes, 57, oversees production. However, as the pub trade has been hit hard by the pandemic, for the moment the brewery is concentrating on canned beer.

So Mr Whitehurst decided it was time to act on suggestions they bring back the Party Seven. He said: ‘It’s out of necessity after the rest of our business shut down overnight last March.

‘We felt we couldn’t give up on Watneys without first trying the Party Seven, given people’s affection for it. We’ve heard so many anecdotes.

‘Many’s the story of old Party Sevens exploding and hitting the ceiling when people tried to open them.

‘Lots of people remember drinking it at house parties, get-togethers, music festivals and football away-days. We’re providing a link back to happier times and it’s also a trip down memory lane for many people. 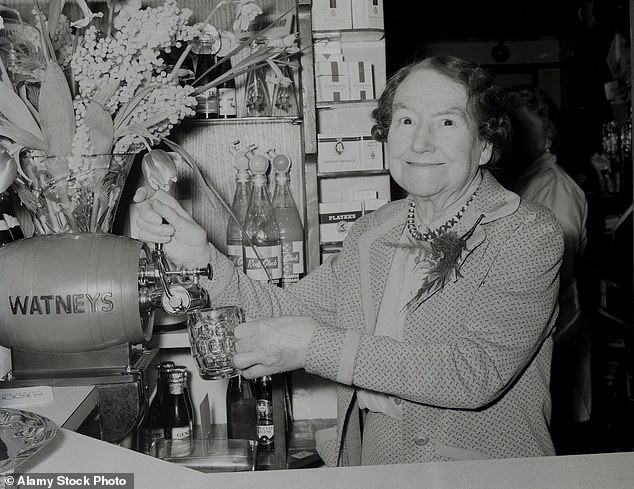 Watneys, the brewer behind the much derided bitter, was founded in 1837 but hit the heights of fame in the 1970s with Party Seven. Pictured: A landlady pours a pint of Watneys Red Barrel in 1965 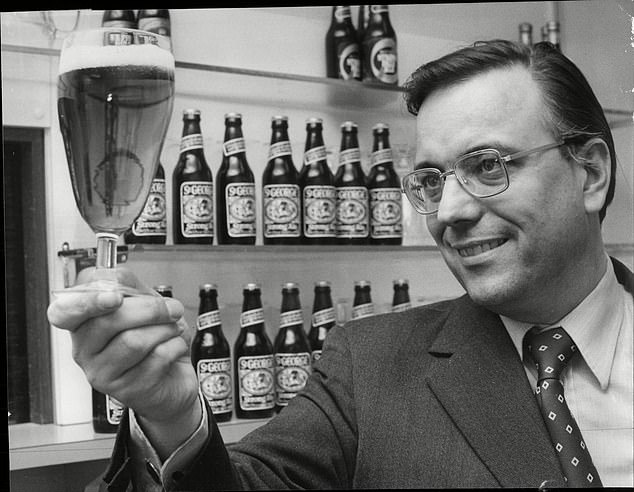 However, the beer’s ‘bland’ and unmemorable taste was slammed by critics and saw the brand disappear in the 80s. Pictured: Peter Humphrey of Watneys in 1978 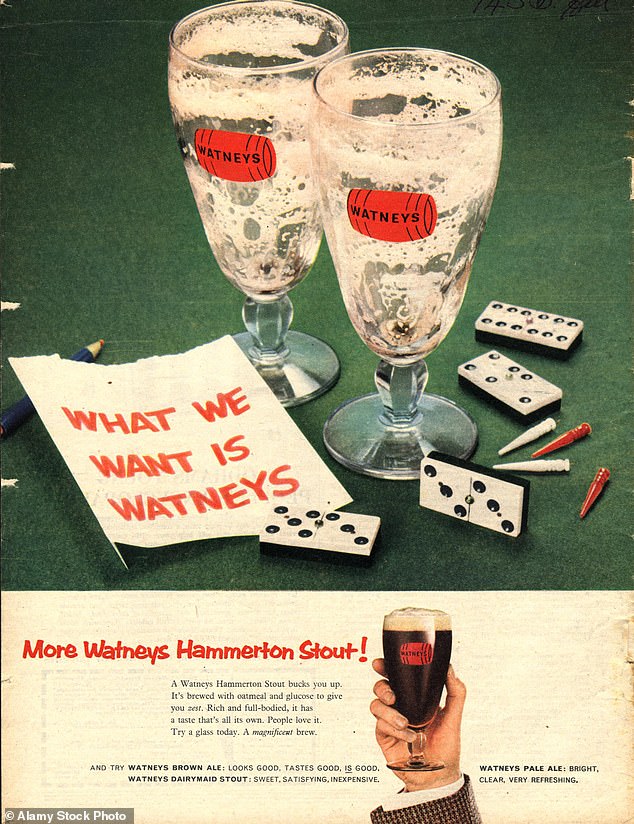 The company brought out several different types of ale during the 1950s and 60s before hitting success with Party Seven. Pictured: Watneys Hammerton Stout Magazine Advert in the 1950s

‘We heard from one guy whose parents met because they were at a party when his father opened a Party Seven and it splashed over the woman next to him. She became his wife.

‘We want it to appeal to people who remember drinking it years ago – but have updated the ingredients so we can also appeal to a new crowd. We have been delighted with the feedback we have had so far.’

One fan of the new Party Seven is Daily Mail reader Justin Barry, 55. Company director Mr Barry, from Allington, Lincolnshire, who enjoyed ‘three or four kegs over Christmas’ with wife Alison, 48, said: ‘It’s quite nostalgic. It reminds me of going to Christmas parties in the 1970s. I remember following my dad as he carried a Party Seven under his arm.

‘It’s the next best thing to a pint in the pub. I think it’ll catch on when we are allowed to have parties once again. You also have to pour it into a glass, so it feels like a proper pint.’

The new Party Sevens are produced on Merseyside and are on sale via www.party-seven.com.

What was Watneys party seven? 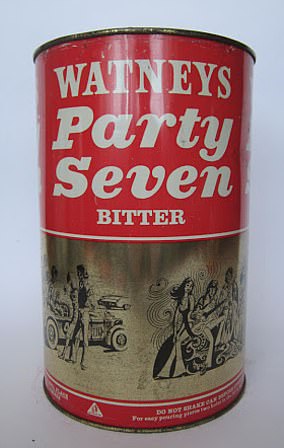 Watneys, a London-based brewer since 1837, launched Party Seven on 21 October 1968, one of the first bulk containers for purchasing beer cheaply.

Though much ridiculed since, their plan was a smart one – to set themselves apart from the competition by evoking the idea of a ‘party drink’ – seven pints worth in one can.

It also complemented their smaller can, Party Four, which they had been selling since 1964.

But Party Seven was quick to draw attention with its hefty red and gold can, retailing in supermarkets for 15 shillings (or 75p). In today’s money that would have been about £9.

It became incredibly popular, especially among teenagers in the 1970s, when it gained its notoriety for ‘exploding’ all over the kitchen at party when the can was pierced.

The decision not to include a ring-pull type of attachment on the can has long been questioned, with some suggesting the design of thicker metal to withstand higher pressure meant it would have not always worked.

Partygoers instead resorted to the several inventive ‘can piercer’ methods, including a tin opener, a screw driver, and even a hammer and a nail.

You had to be quick to puncture to holes in the can, one for the beer and another for air to get in, or else face a ‘beer fountain’ that could cover the walls of your house.

Sales of beer in party-sized containers took off in the 1970s, and in 1974 the UK Government added ‘beer in party containers’ to the list of items used to make the RPI (Retail Price Index) calculation. They removed it in 1987.

Unfortunately however, the beer’s ‘bland’ and unmemorable taste was slammed by critics and saw the brand disappear in the 80s.

It returned to pubs in 2016 and was made using spare capacity in other craft brewers in London.

Victim screams ‘help me’ with bodies on floor after London stabbing