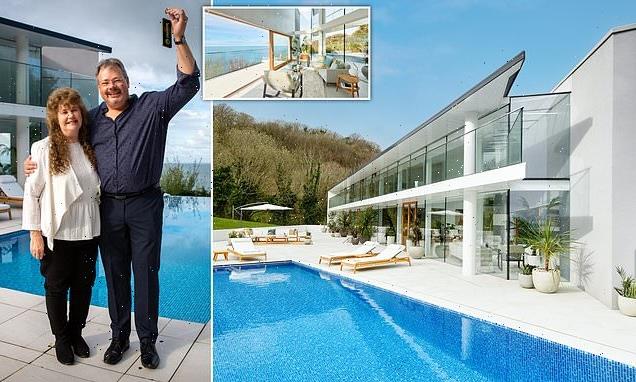 A ‘gobsmacked’ father-of-five has won a £3million ‘Bond’ style home on the North Devon coast after entering a charity prize draw on TV.

Foundry worker Glen Elmy, who lives in a modest semi-detached home with his family in Walsall, West Mids, saw the lifechanging raffle advertised on television and purchased a £25 ticket back in August to help raise funds for the NSPCC’s Childline.

The 54-year-old never expected to scoop the stunning jackpot prize and admits he was left ‘gobsmacked’ when he found out he’d won the £3million mansion, which boasts a large infinity pool with stunning panoramic views of the ocean.

Mr Elmy says the five-bedroom mansion, which is situated on the North Devon coast within picturesque Exmoor National Park, is ‘like something from a Bond film’ and it still feel surreal because the only thing he’s ever won was ‘£3 at a Bingo night’ on holiday.

Located above the turquoise water on Combe Martin Bay, the mansion replaces an old 1930s bungalow that stood there and was designed by award-winning architect Guy Greenfield.

It remains unclear if the property has ever been lived in after it was built in the summer of 2018 and put on the market, but it was listed as a finalist at the prestigious Royal Institute of British Architects (RIBA) South West Awards 2019. 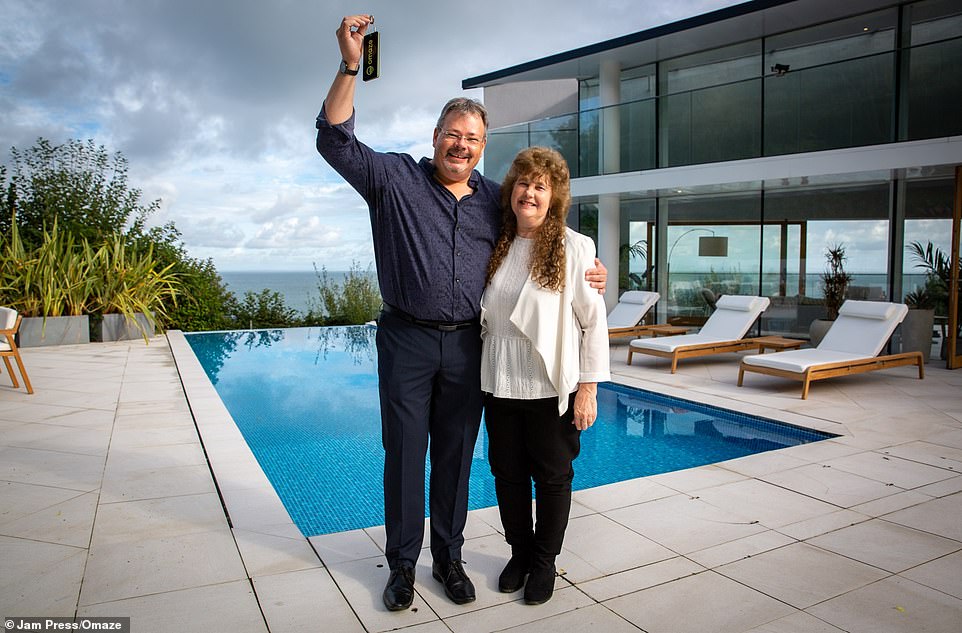 Glen Elmy, 54, (Left) and his wife Debbie, 60, (Right), who,live in a modest semi-detached home with their family in Walsall, West Mids, have the keys to a £3million mansion following a TV prize draw 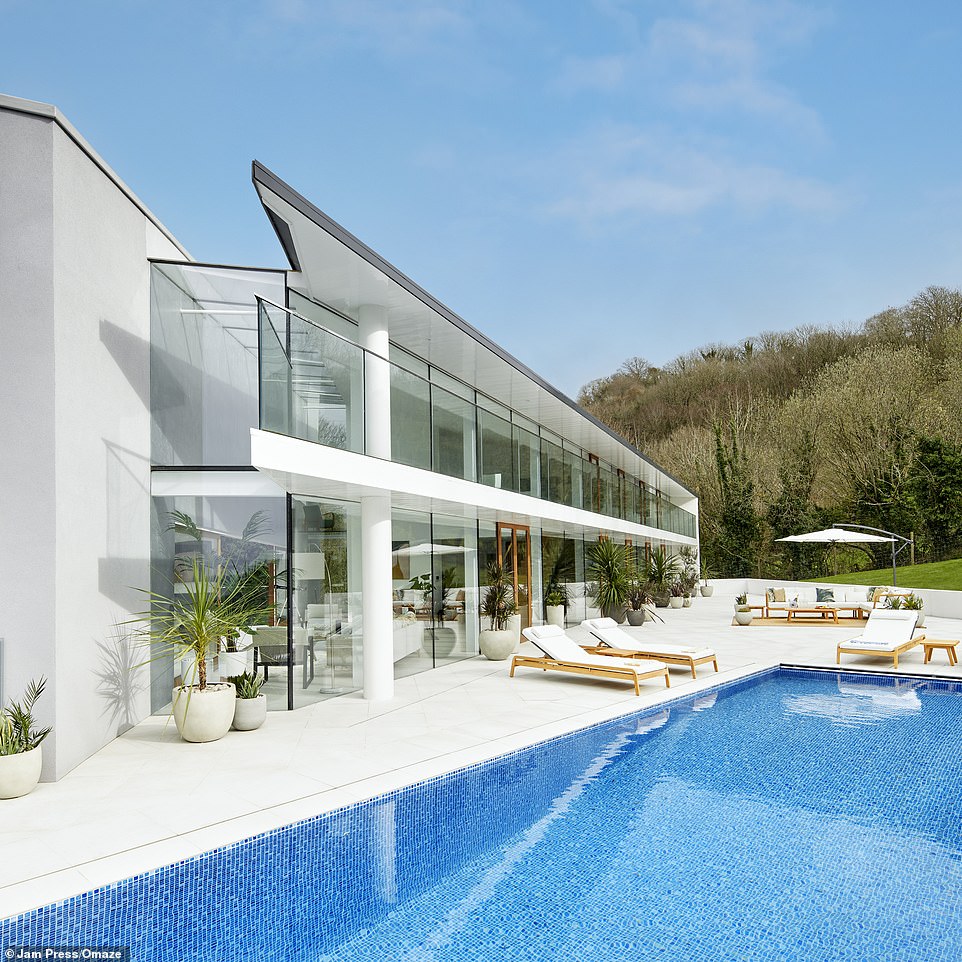 Mr Elmy has won a £3million ‘Bond’ style home on the North Devon coast after entering a £25 charity prize draw on TV back in August, raising funds for NSPCC’s Childline 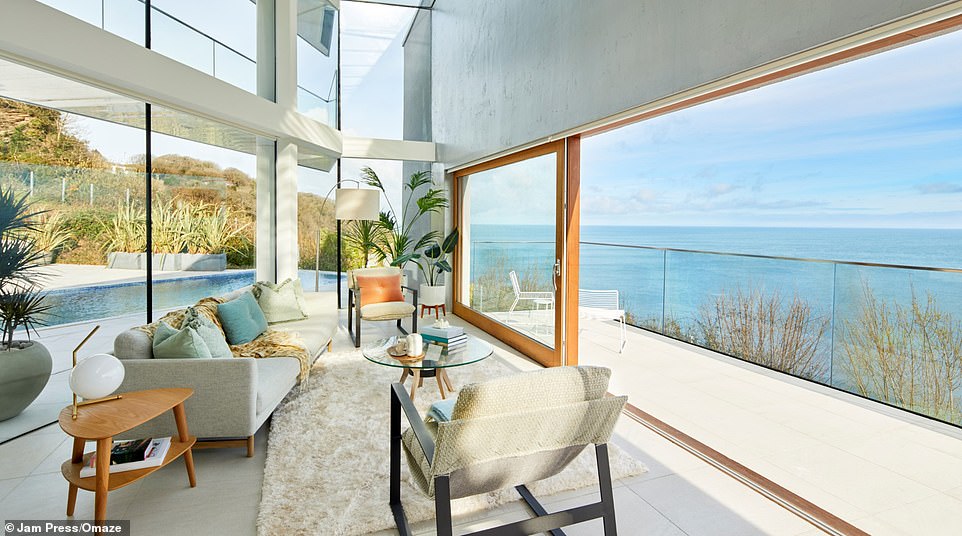 The five-bedroom mansion, which is situated on the North Devon coast within picturesque Exmoor National Park, is ‘like something from a Bond film’ and features a stunning panoramic view that looks out to sea (Above) 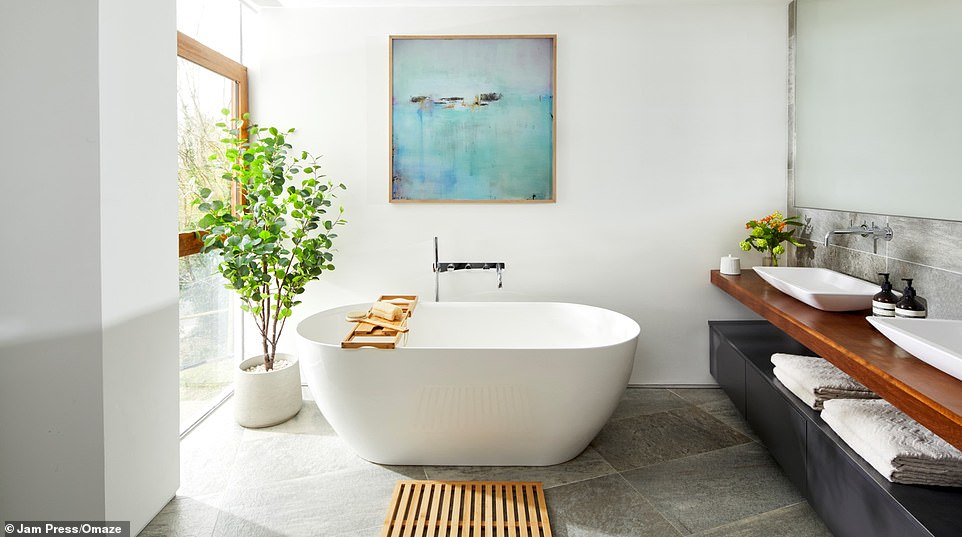 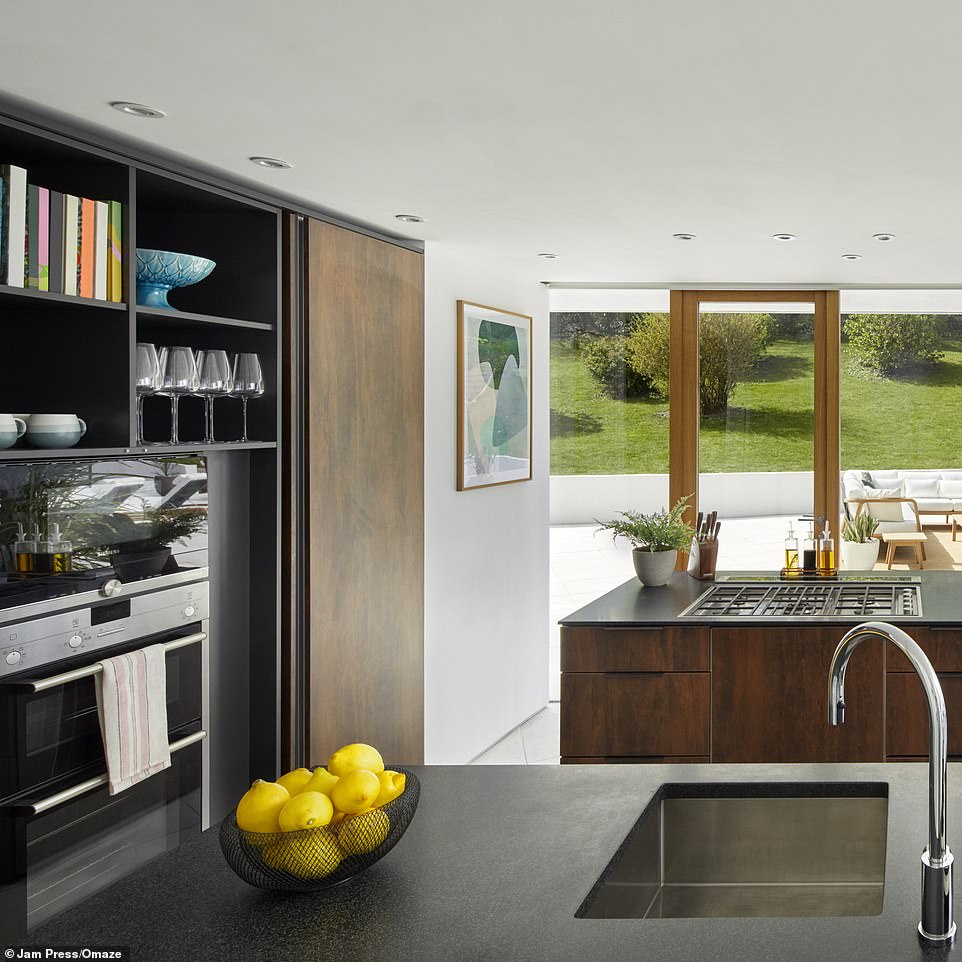 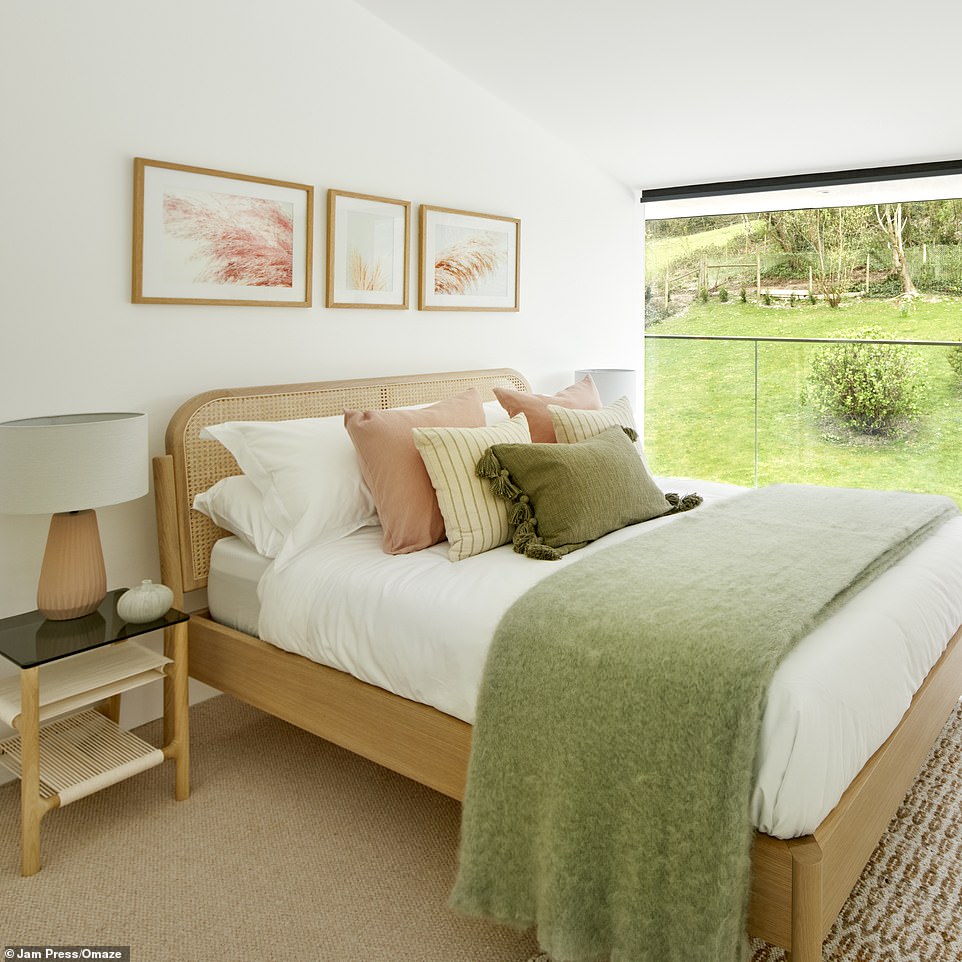 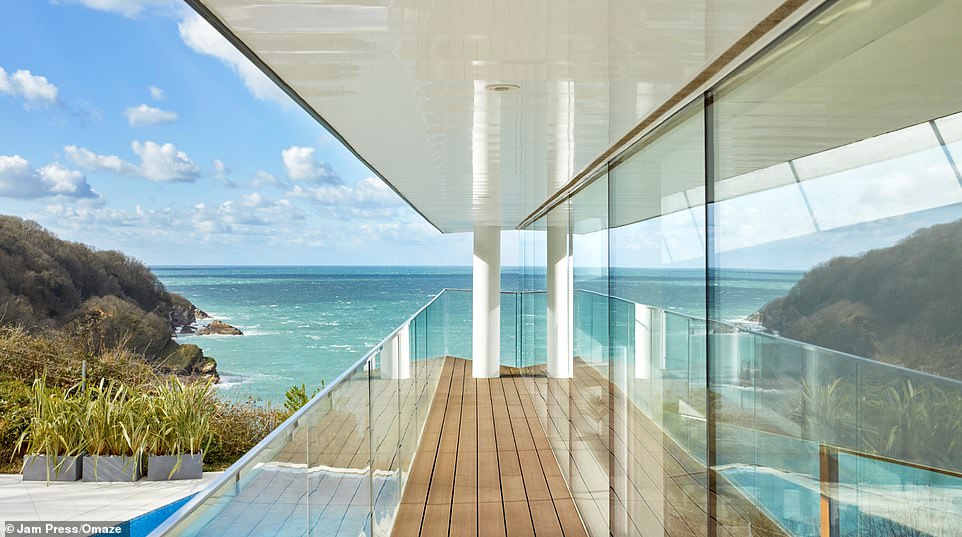 Their new clifftop property, which boasts five double bedrooms and six bathrooms, features a modern infinity pool with stunning panoramic views of the ocean and is only 11 miles from the stunning market town, Barnstaple.

Combe Martin Beach is just half a mile away and the popular surfing beaches of Croyde, Putsborough and Woolacombe are close by.

The South West Coast Path is also near Stealth House, making it an ideal destination for keen walkers.

Mr Elmy, who has been married to his wife Debbie for 21 years, said he is so blown away by the property that his family will now use it for their first family holiday in two years.

Overjoyed Mr Elmy said: “I’m totally gobsmacked, the only thing we’ve ever won before was £3 at a Bingo night on holiday.

“We absolutely love the house – if I could have designed one from scratch, it would look just like this – it’s like something from a Bond film.

The grandfather of three was given the option to keep, rent or sell the house after winning it in the charity draw that was part of a fundraising campaign for NSPCC’s Childline. 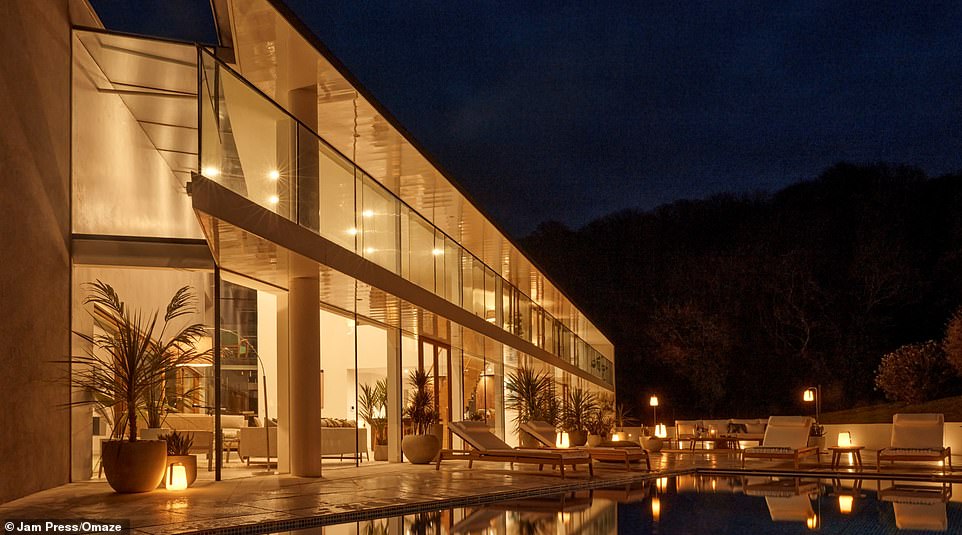 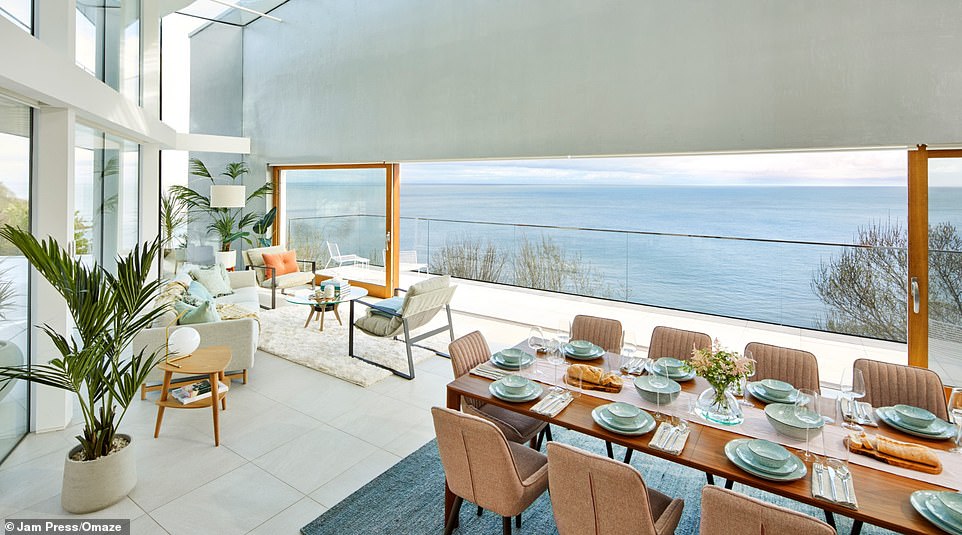 The cliffside property (Above) gives 360 degree views of the area and is a far cry from the £230,000 family home that Mr Elmly and wife Debbie, 60, have shared for the past 26 years in Walsall, West Mids 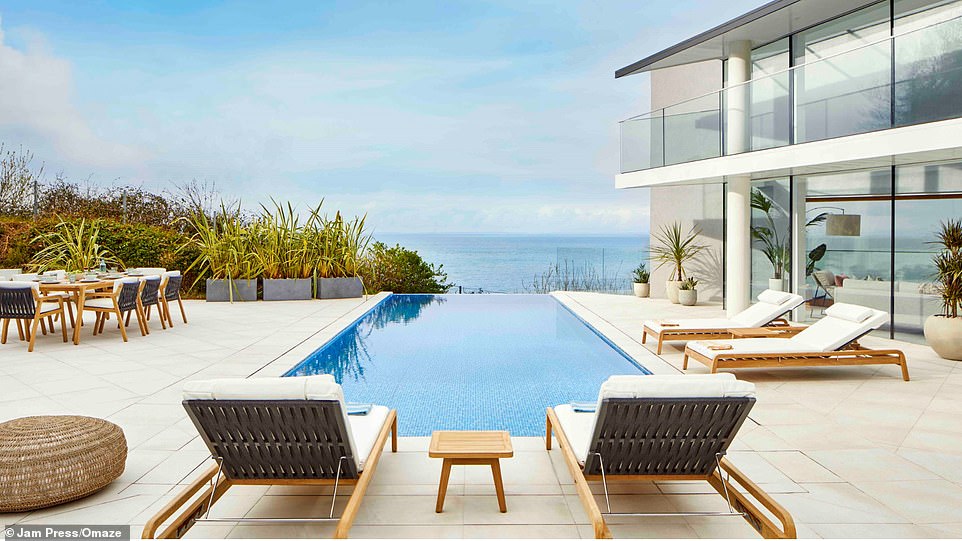 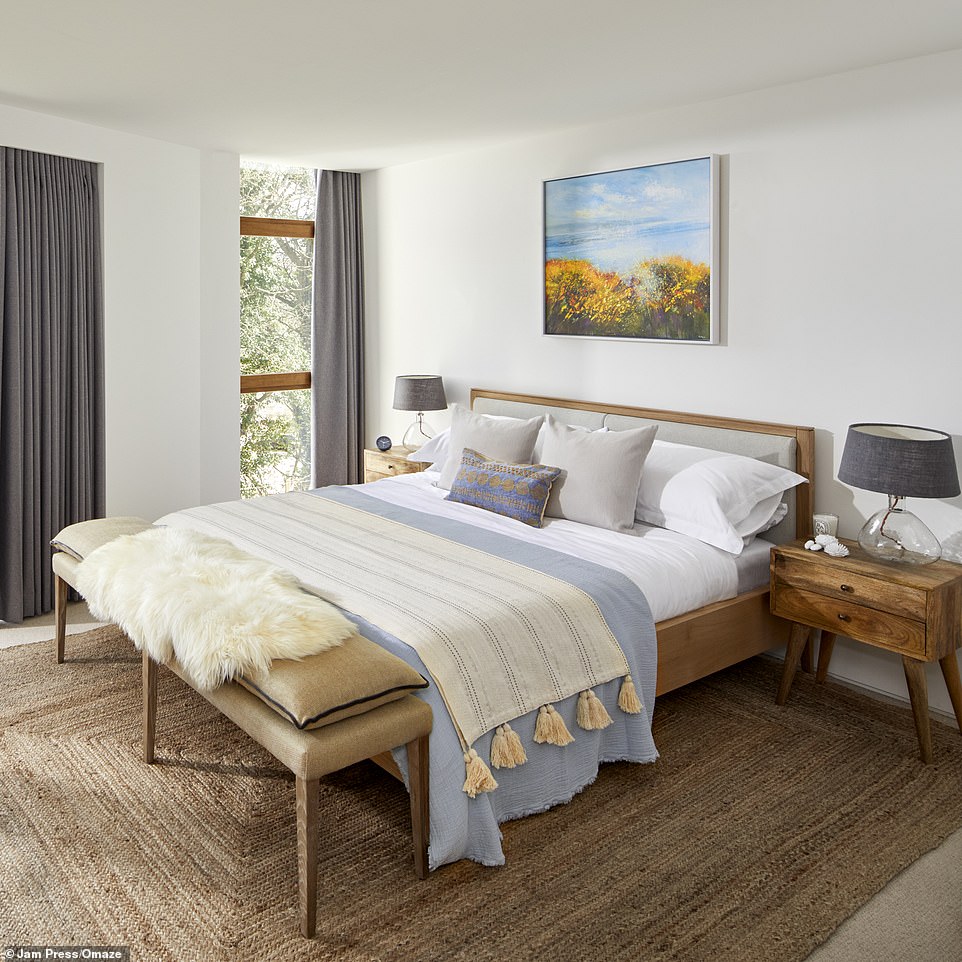 Mr Elmy was visiting his parents’ house when he found out he scooped the main prize in the Omaze Million Pound House Draw after buying a £25 ticket in August as he saw the draw on TV.

He added: “My wife Debbie lost her father to Covid earlier this year and our youngest son was made redundant last week, so winning this house is just what the family needed, it’s life changing for all of us.

“This house is so spectacular we’re going to enjoy our first family holiday for two years right here. I don’t think we’d find a better place anywhere else in the world.”

Mr Elmy was adamant they’d not be selling the property, saying: “We will be keeping it as there’s no other house like it in the country – so why would we want to sell it?”

The father-of-five has spent the last 33 years working at the same foundry in the Black Country town.

He is an Operations Director at the Castings PLC foundry where his eldest son Sam has worked alongside him for the past six years.

All stamp duty and legal fees were covered as part of the prize and Mr Elmy has also been given £20,000 in cash to help with running costs. 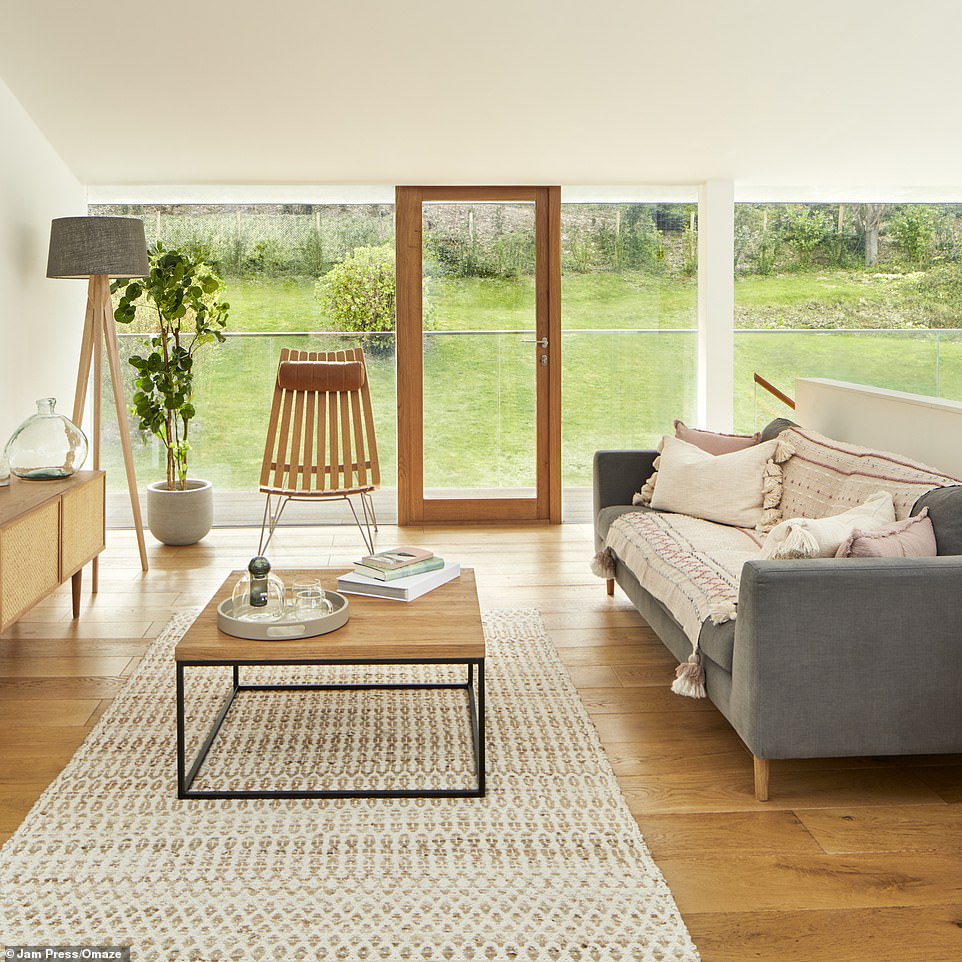 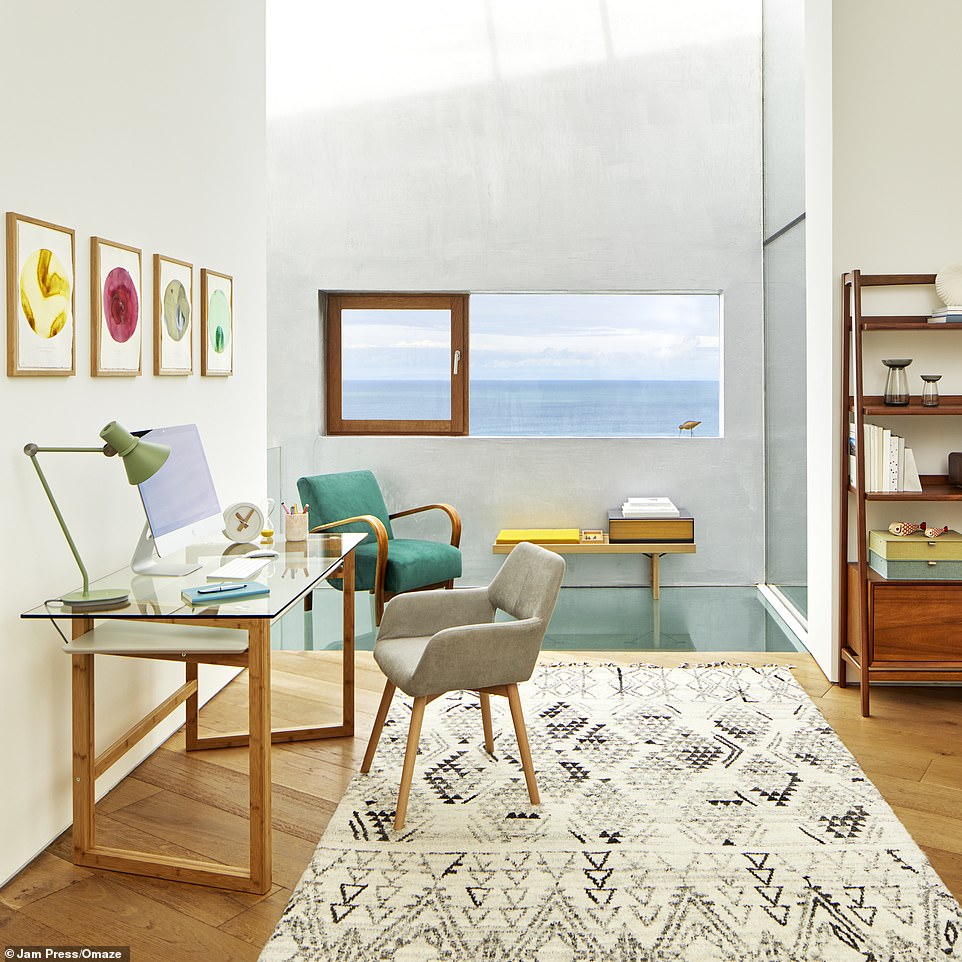 Every room in the house looks out to Combe Martin Bay, which is favoured by locals and tourists in the area, making the location highly sought-after (Above) 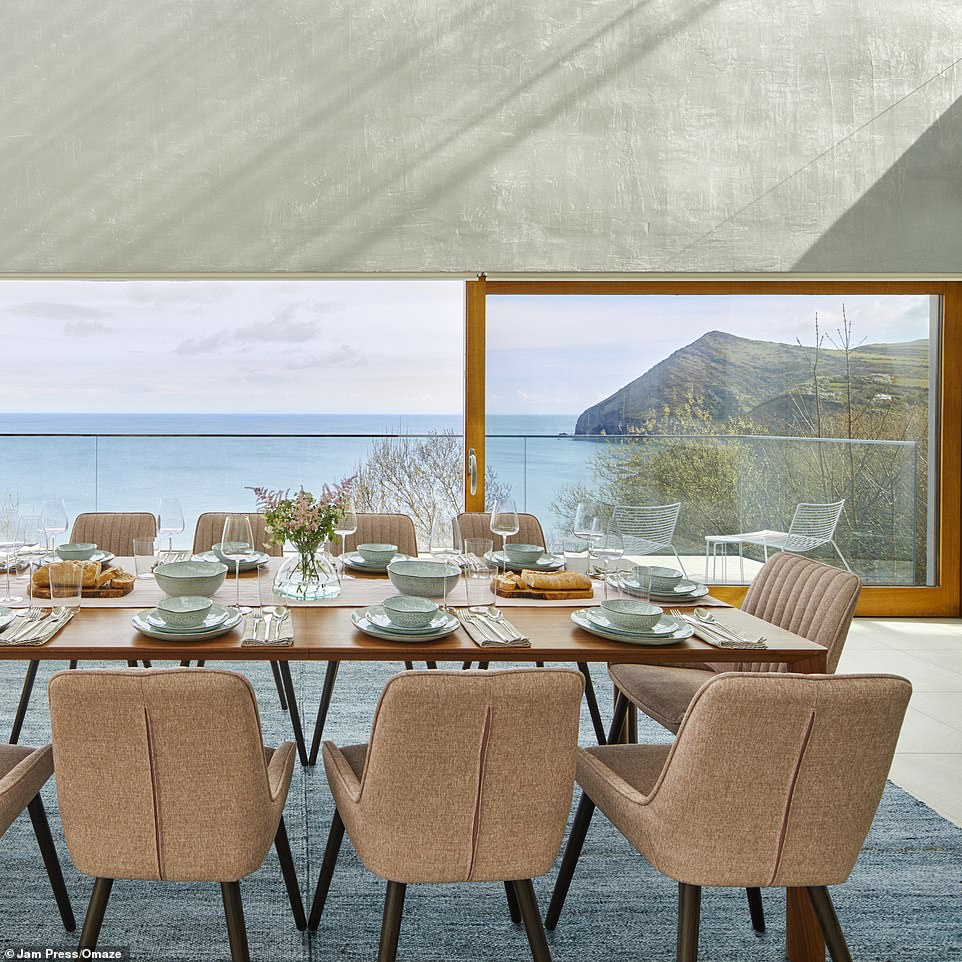 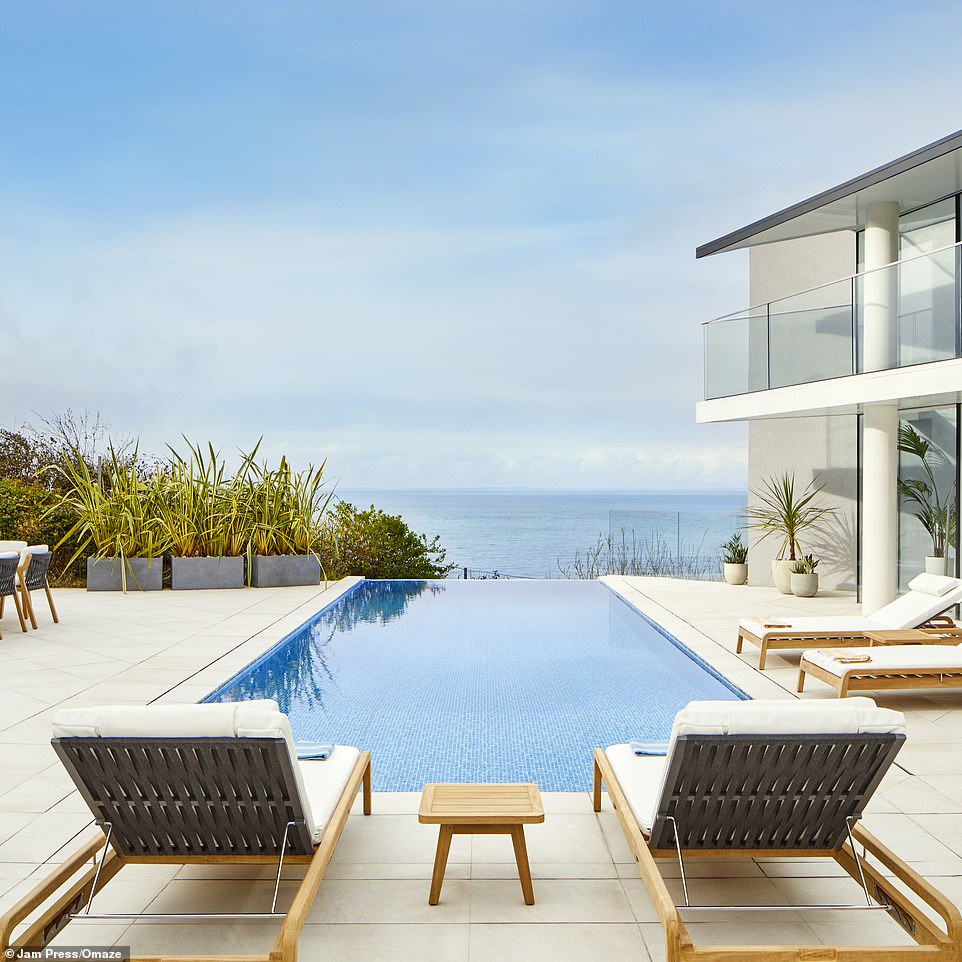 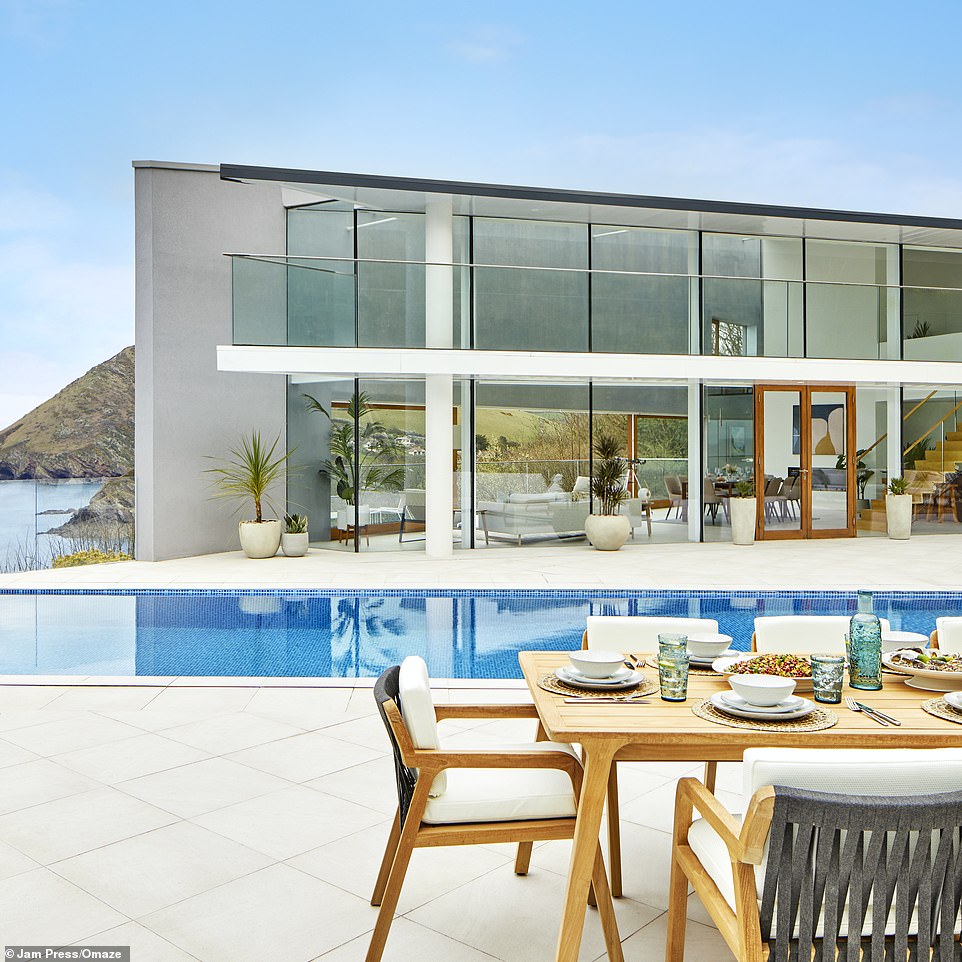 The view is one of the main selling points of the property, which is located right on the cliff-top, close to the edge, with nothing blocking the view of the water and of the surrounding natural landscape 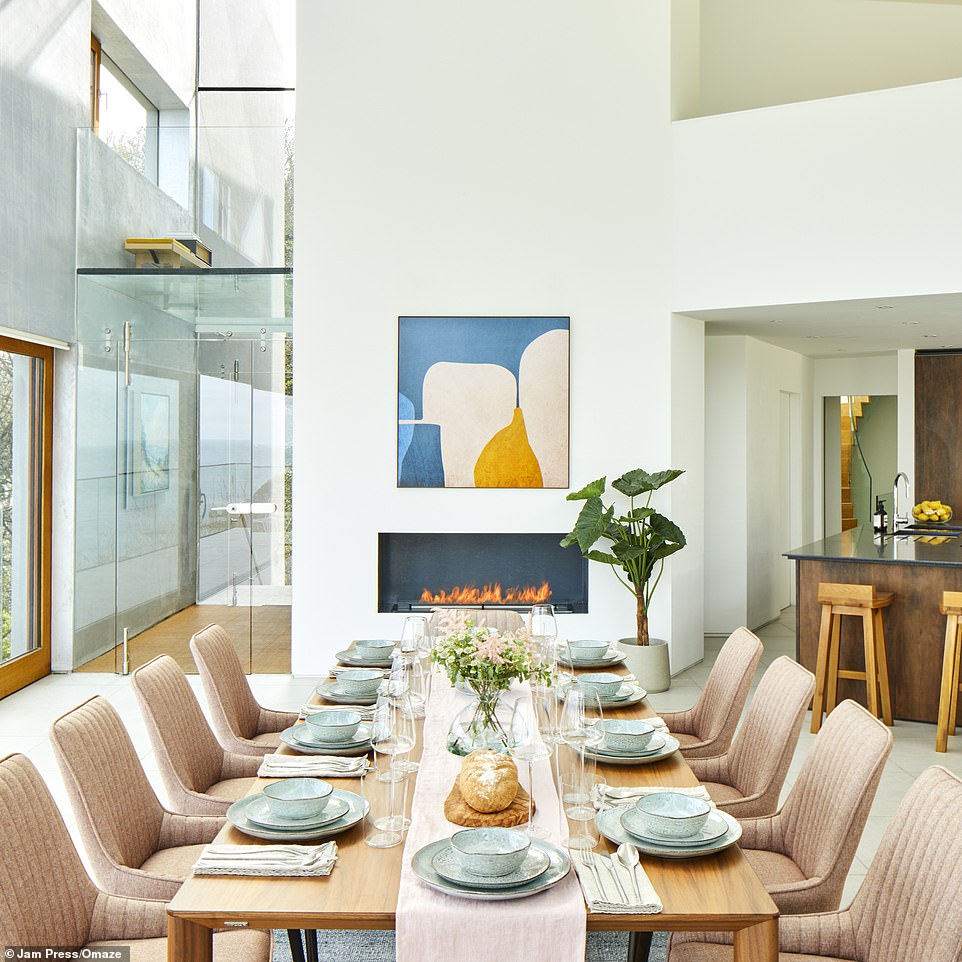 The 10-seat dining room table is next to the large fireplace and open-plan kitchen, which features a dark wood stain and black decor (Above) 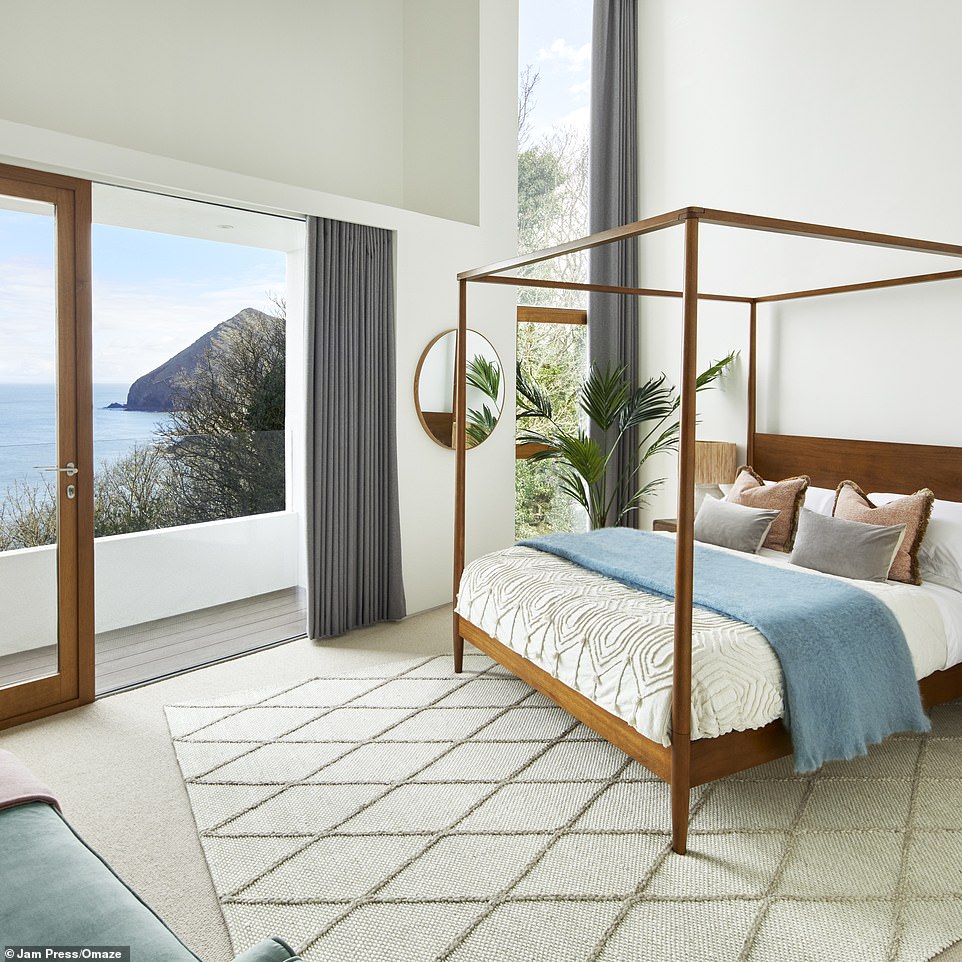 As well as making him an instant three-times millionaire, the draw also raised funds for the NSPCC’s Childline.

Mr Elmy said: “I think the partnership between Omaze and Childline is a brilliant idea as it’s raising money to help the charity keep doing the incredible work they do to help children when they need it the most.”

Childline’s partnership with Omaze has provided the charity with a donation of £1,000,000 that will help the charity provide 33 days of 24 hour round the clock counselling for children.

Childline Founder and President Dame Esther Rantzen said: “We are extremely grateful to Omaze and all those who have taken part for their fantastic support.

“Childline saves and transforms the lives of children who desperately need us – and this stunning total will be crucial in ensuring that we can continue to reach out to the young people who rely upon us.”

This is the fourth house Omaze has given away since it came to the UK last year – raising £2,750,000 for various charities in the process.

The previous prizes were a £3 million townhouse in London’s leafy Fulham, a £2,500,000 five-bedroom property in the Cotswolds and a £1 million house in Cheshire.

James Oakes, SVP International at Omaze said: “Omaze is a win-win for both charities and entrants.

“By offering an incredible prize like this spectacular coastal house in Devon, we’re giving people the chance to win the house of their dreams, while also introducing charities to audiences they wouldn’t usually be able to reach.

“We’ve found this method of fundraising is making a big difference to causes all around the world.”

What are the rules on raffling a home – and what happens if they don’t sell enough tickets?

What is a house raffle and how is it legal?

Raffling off a home is becoming more and more popular with dozens taking place every year in the UK.

For the seller, the idea is to sell enough raffle tickets to cover their asking price – plus cover the cost of running it.

Most set up a website to advertise their competition and charge between £2 and £5 a ticket in order to attract as many entrants as possible – but more expensive properties can be raffled at £25 a ticket.

Once they hit their target total, they then select a lucky winner at random – but the draw must be carried out by a regulated lotto firm not the owner.

Those who want to keep the money gained for themselves must either hold a free prize draw or add a competition element to the raffle.

Competitors should have to prove their skill, knowledge or judgment in order to win the top prize.

Many people get around this by asking an incredibly simple question such as ‘what style of property is this house: A – Victorian, B – Tudor or C – Georgian’ when people pay for their raffle ticket.

Others have run spot the ball games to decide the winner.

How often do house raffles fail?

More and more raffles are failing to hit ticket targets as people become suspicious of them.

In this case the organisers will fall back on their terms and conditions.

These usually allow them to keep 25 per cent of total sales to cover their time.

They can also deduct further reasonable running costs such as legal or PR spending.

The remaining money is then given away – but it is always smaller than the value of the home that was up for sale.