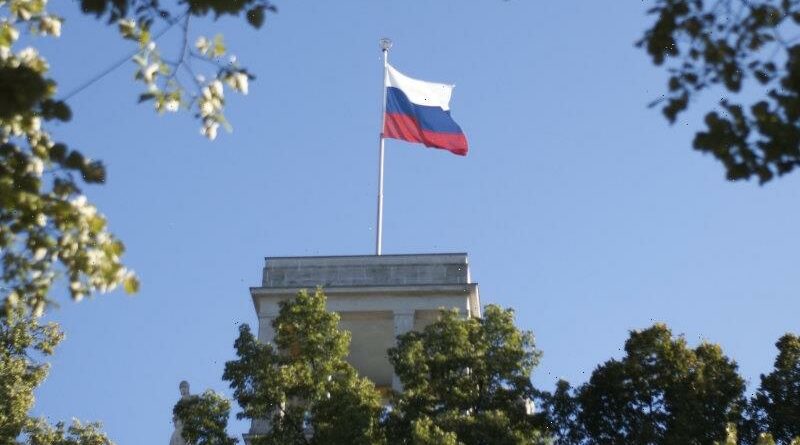 London: A British security guard accused of spying for Moscow is an ex-Royal Air Force airman who kept a giant Russian flag, books and communist memorabilia on display at his home.

Ministers were under pressure on Thursday night to explain how David Smith, 57, was given a job at the British embassy in Berlin despite keeping a collection of Soviet memorabilia in plain sight along with objects linked to Moscow-backed rebels in Ukraine. 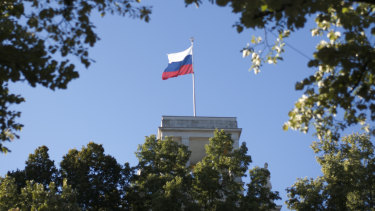 The Russian national flag waves on top of the Russian embassy in Berlin, Germany. A Briton working at the nearby British embassy was arrested on Tuesday accused of passing on secrets to Russia.Credit:AP

Smith was arrested at his apartment in Potsdam on Tuesday after a months-long investigation led by MI5 and German security services. A Defence source confirmed to the London Telegraph that Smith was a former junior RAF airman.

According to Whitehall officials, Smith is believed to have offered the Russians a list of persons entering and exiting the embassy. The information is thought to have been low risk because British agents use aliases when signing in to embassies.

However, senior Conservative MPs last night questioned whether Smith, who was hired by a private contractor to guard the embassy, had been vetted by the Foreign Office and security services before taking up the role.

Pictures taken at Smith’s flat on Thursday revealed he kept a giant Russian flag in plain sight through his front window, as well as Soviet military caps. 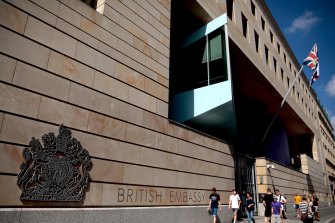 Pedestrians walk past the British embassy in Berlin where a former RAF airman worked as a security contractor.Credit:Getty Images

His shelves were laden with volumes of military history, while a small communist East German flag was propped on the mantelpiece. A Russian naval shield lay on the desk, while a toy dog wore the green hat of the Russian Border Guards Service.

Books included a biography of the high-ranking Nazi Reinhard Heydrich and a three-volume set by the former Russian culture minister Vladimir Medinsky in which he aimed to dispel “myths about Russia”.

Foreign Office sources stressed that all private contractors working at British embassies were subject to strict checks. But Sir Iain Duncan Smith, the former Tory leader, said: “There are clearly questions to be asked over whether the early vetting turned up anything and if not, why not. The vetting is clearly not up to scratch.

“He’s no Kim Philby. If the vetting process can’t pick him up, and he’s low level, are they going to be able to pick up people who are deeper problems to us and on a serious scale?”

Bob Seely, the Tory vice-chairman of the all-parliamentary group on Russia, said it was “concerning” that security concerns had not been flagged during the vetting process, given the “eccentric” contents at Smith’s home.

Other items on obvious display at the apartment included several scribbled notes on a desk which appeared to be relevant to the investigation. One of them read: “Berlin police have four numbers,” while another said: “Docs for meeting at the weekend”.

Security experts last night suggested the planned “meeting” could have been set up by Western security services and used as the trigger for his arrest.

Smith kept other memorabilia linked to the Russian annexation of the Crimean Peninsula in 2014, and the subsequent bloody war in Ukraine.

Through the window of his flat could be seen letters from Dnipro, a city on the front line of the conflict, as well as a coffee mug with the emblem of Novorossiya, a separatist Russian puppet state in eastern Ukraine. He also displayed a framed insignia of the Berkut riot police who were involved in violent crackdowns on pro-Western protesters in Ukraine in 2014. Outside, Smith’s silver Ford Fiesta was still parked. Bild, the German tabloid, joked that the vehicle was very different from the more glamorous Aston Martin sports cars favoured by James Bond.

Smith reportedly moved to Potsdam four years ago. Neighbours said they barely knew him, adding that he left home for work each day at 6am and returned late at night. One neighbour said: “He was friendly, smiley and a polite guy”. Neighbours spoke of a woman who used to live with him but none of them had seen her recently.

Smith has been charged under German law with “activity as an agent for a foreign secret service” and remanded in custody. He is unlikely to be extradited to the UK. Andrei Soldatov, a leading expert on Russian intelligence, said Smith would likely be accused in court of being a “walk-in” agent as Russian intelligence has largely been relying on people approaching them and offering them information rather than cultivating its own sources.

“I doubt that this was an agent they have been cultivating. Things that were possible in the 1930s don’t exist anymore,” he said. “The job of Russian intelligence staff at embassies abroad has mostly been about sitting and waiting for those people to show up.”

Scotland Yard Police Commissioner Dame Cressida Dick said detectives had been working on the case with German police for “a number of months”.

Former national security adviser Lord Peter Ricketts said Smith was unlikely to have had access to highly classified information. However, he added: “I think the Russian intelligence threat to all our countries has grown again.”

A spokesman for the Foreign Office refused to comment.

Top 5 Reasons to Adjust Your Withholding

Trainer refuses to leave his elephant’s side