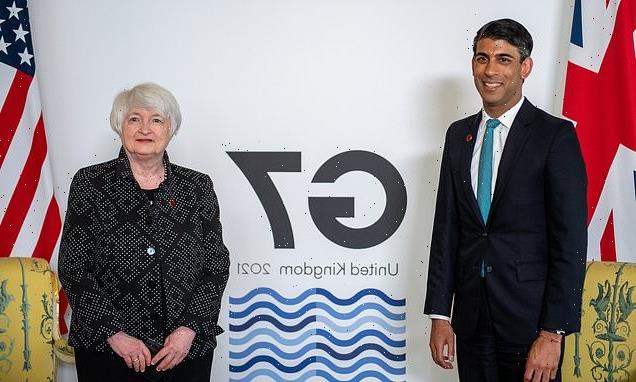 G7 finance ministers are meeting in London today in an attempt to finalise a tax crackdown on tech giants by imposing a minimum global corporate tax rate.

The minimum rate is targeted at the likes of Google, Facebook and Amazon who make vast sums across the world but avoid paying tax in many countries by basing their operations in tax haven countries.

And it was revealed today that Microsoft’s Irish arm made a £222billion ($315m) profit last year but paid no corporate tax because it is ‘resident’ in Bermuda.

However the subsidiary which collects licence fees has no employees in Ireland other than its directors, despite the profits that are equivalent to three quarters of the GDP of Ireland.

Rich nations have struggled for years to agree a way to raise more tax from large multinational companies, and US President Joe Biden is pushing for a minimum rate of 15%.

Sunak said ahead of the meeting: ‘Securing a global agreement on digital taxation has also been a key priority this year – we want companies to pay the right amount of tax in the right place, and I hope we can reach a fair deal with our partners.’

Britain and many large European countries are pushing for companies pay more tax where they make their sales – not just corporation tax where they report their profits, or locate their headquarters. 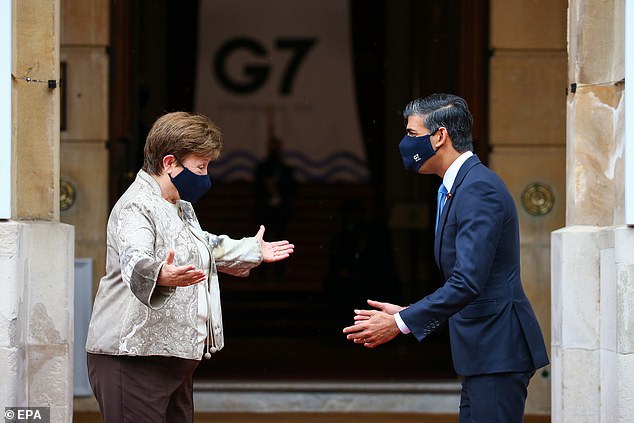 Rishi Sunak greets Kristalina Georgieva, managing director of the International Monetary Fund at the gathering in London today that is the first time the ministers have met face-to-face since the start of the coronavirus pandemic 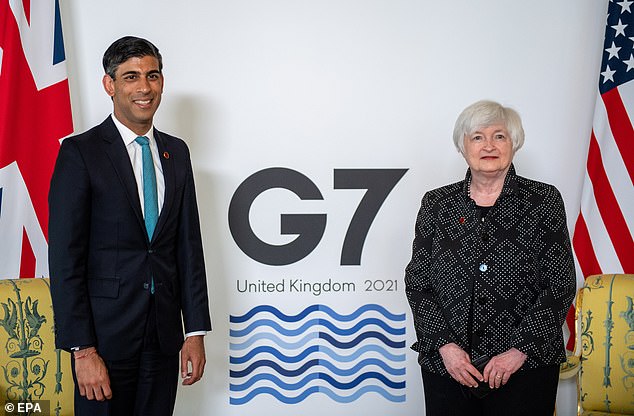 Rishi Sunak with US Treasury secretary Janet Yellen. US opposition to a digital services tax may be a sticking point at the negotiation ahead of the G7 summit

Ireland, which is not in the G7 but is a member of the EU, has also expressed ‘significant reservations’ about Biden’s plan for a unified minimum corporate tax rate of 15 per cent.

Its 12.5 per cent tax rate is one of the lowest in the world, prompting tech giants such as Facebook and Google to make Ireland the home of their European operations.

British, Italian and Spanish fashion and luxury goods exports to the United States will be among those facing new 25% tariffs later this year if there is no compromise.

The gathering, chaired by Rishi Sunak, is the first time the ministers have met face-to-face since the start of the coronavirus pandemic.

The EU’s four biggest economies say a deal is ‘within sight’ and said the critical moment has been reached to punish the tax abuse by the huge corporations before the summit, which precedes the gathering of global leaders in Cornwall next week.

They wrote: ‘For more than four years, France, Germany, Italy and Spain have been working together to create an international tax system fit for the 21st century.

‘It is a saga of many twists and turns. Now it’s time to come to an agreement.

‘We therefore commit to defining a common position on a new international tax system at the G7 Finance Ministers meeting in London this Friday.’

According to a draft communique, the finance chiefs and central bankers of the world’s seven richest nations will express ‘strong support’ and a ‘high level of ambition’ over a global minimum corporate tax.

They then hope to reach broader agreement at a G20 finance meeting scheduled for July.

Sunak starts the two-day meeting on Friday with counterparts from Canada, France, Germany, Italy, Japan and the United States, before a leader summit next week including Joe Biden.

The leaders will be looking to crack down on companies like Microsoft whose subsidiary Microsoft Round Island One paid zero corporate tax in Ireland last year.

The subsidiary collects licence fees for the use of copyrighted Microsoft software and its profit of £222billion last year was equivalent to three-quarters of Ireland’s gross domestic product, The Guardian reported.

Microsoft Round Island One’s registered address is an office of the law firm Matheson in Dublin, but it states in its accounts it has no employees other than directors.

In the tax statement, the company says: ‘As the company is tax resident in Bermuda, no tax is chargeable on income.’

Bermuda does not levy corporation tax.

The company paid a dividend of £24.5billion to Microsoft Corporation last year, then a further special dividend of £30.5billion. 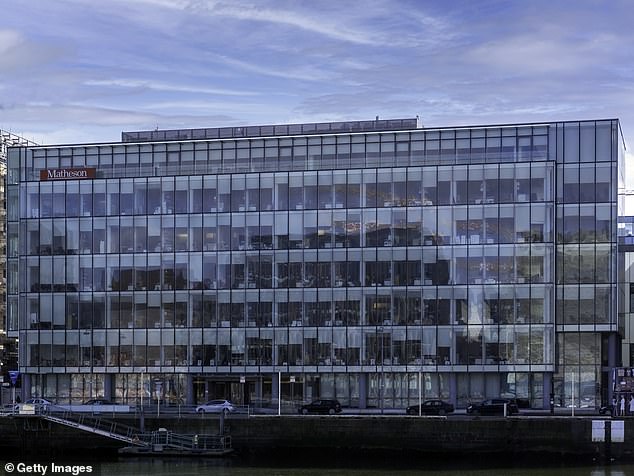 Proponents of the minimum corporate tax rate argue that it is necessary to stem competition between countries over who can offer multinationals the lowest rate.

They say that a ‘race to the bottom’ saps revenues that could go to other government priorities.

The corporate tax is one of two pillars in efforts for global fiscal reforms, the other being a ‘digital tax’ that would allow countries to tax the profits of multinationals that are headquartered overseas.

Britain, which later hosts the COP26 UN climate summit in November, also wants the G7 to embrace a green recovery.

However, NGOs accuse the G7 of failing to invest enough in green energy during the pandemic and massively subsidising polluting industries instead.

Ministers also plan to commit to ‘sustain policy support’, or stimulus, for ‘as long as necessary’ to nurture economic recovery, while addressing climate change and inequalities in society, according to the document.

Furthermore, they will urge ‘equitable, safe and affordable access to Covid-19 vaccines’ everywhere in order to fully overcome the deadly pandemic.

And the thorny topic of the regulation of digital currencies such as bitcoin will also be on the agenda.