NORTH PORT, Fla. – The slaying of Gabby Petito and subsequent disppearance of Brian Laundrie, a person of interest in her case, prompted a prominent Florida attorney to put a $20,000 bounty on his whereabouts.

“I think a missing child is every parent’s worst nightmare,” the lawyer and mother of two, Tatiana Boohoff, told Fox News Friday. “Our hearts go out to her family and to the community, and we hope that together we can get some answers and get justice for Gabby.”

Public scrutiny fell heavily on Laundrie, 23, who was the 22-year-old Petito’s fiancé when her mom reported her missing on Sept. 11, well before authorities discovered her remains in a Wyoming park full of bears, wolves and other wildlife. The young woman may have last been seen alive at a Jackson Hole restaurant on Aug. 27. 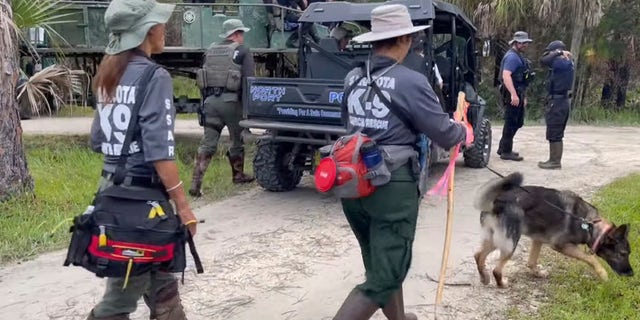 Search teams fanout at  Carlton Reserve park near North Port, Flaa Florida wilderness park to search for Brian Laundrie, the boyfriend of Gabrielle "Gabby" Petito,  on Wednesday, Sept. 22, 2021.  Petito, 22, was reported missing Sept. 11 by her parents after they she did not respond to calls and texts for several days while the couple visited parks in the West. Her body was discovered Sunday at Grand Teton National Park in Wyoming.  (North Port Police Department via AP)

Laundrie pulled into his parents’ driveway in her van on the morning of Sept. 1. Since then, he and his parents have refused to answer any questions from police or the media regarding Petito.

Then his family said nothing about the missing young woman – who’d lived in their home for two years.

Ten days later, North Port, Fla., police found Petito’s van at the Laundrie family home, on the same day as the missing person report, and seized it as evidence.

But on Friday, Sept. 17, police returned to the house only for Landrie’s parents to tell them they hadn’t seen their son since Tuesday, Sept. 14, and that they believed he was missing. Petito’s family attorney has maintained that he’s in hiding.

The timeline of events rubbed Boohoof – whose children are 7 and 17 – the wrong way. So she’s giving $20,000 to “the first person to supply information leading directly to the exact whereabouts” of Laundrie.

Gabby Petito appears highly distraught in Aug. 12 police bodycam video showing the couple pulled over in response to a report of a domestic incident between them.
(Moab PD )

Boohoff has four offices throughout the state and another in Seattle, Washington – including one just 3.5 miles from the Laundrie home, where Petito also lived for the past two years.

“We have an office in North Port, and our employees work and live there,” Boohoff said. “We serve clients there – and we want to do what we can to help find answers and get justice.”

Boohoff said she’s already received a number of tips, which she forwarded to the FBI. She’s asking anyone else with leads to go directly to investigators. 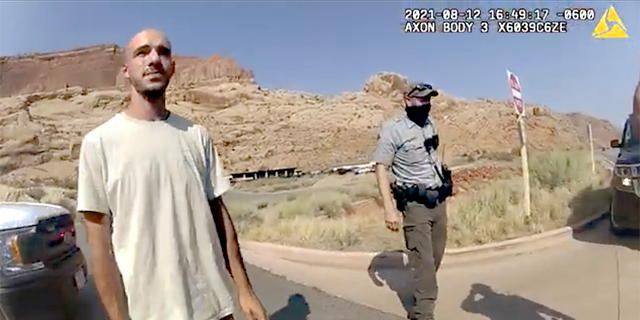 After the travel-blogging young woman was reported missing, Fox News Digital was first to report a domestic incident involving the couple in Moab, Utah, in which a witness reported seeing Laundrie slapping and hitting Petito in front of an organic grocer in broad daylight.

Police responded but issued no arrests after both Petito and Laundrie, along with a different witness, said nothing about him hitting her. They split the couple up overnight – booking him a motel room through a nonprofit program – but the inn could not confirm whether Laundrie actually spent the night there.

Fox News Digital was first to report that on Aug. 27 a New Orleans couple witnessed Laundrie arguing with female wait staff at Merry Piglets, a Tex-Mex restaurant, and that Petito, visibly upset, at one point apologized to the workers.

That move – undermining Laundrie’s rage – likely led to an explosive argument right before Petito’s homicide, according to Utah attorney Susanne Gustin, who said the incidents show telltale signs of a possible domestic abuser in Laundrie’s behavior.

The FBI on Thursday announced debit card fraud charges against Laundrie for allegedly accessing someone else’s account between Aug. 30 and Sept. 1 – after Petito died by homicide in the Teton Range in Wyoming.

Police are searching the T. Mabry Carlton Jr. Memorial Reserve in Florida for Laundrie – but many are speculating that he’s fled the area.

What is 'herd immunity', and will it slow coronavirus pandemic?