The family of an Aboriginal man found dead in a river after last being seen by police three months ago say they’re devastated that his children will grow up without a father.

Gomeroi man Gordon Copeland, 22, was last seen by police officers entering the Gwydir River outside Moree on July 10th. Police have said they saw the man near a bogged car at the Yarraman Bridge on the Carnarvon Highway, and he allegedly ran away from them before entering the river. 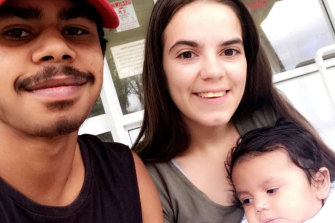 Gomeroi man Gordon Copeland and his partner Josephine with their son.

Police have previously said they saw the car earlier, travelling at high speed on the Newell Highway, and Mr Copeland’s family claim he was a passenger in a vehicle that was pursued by police.

His body was found during a third comprehensive search after concerns were expressed by family and the local community in recent weeks.

Police divers found his body during a search on Thursday, just 500 metres away from where he was last seen. The body was formally identified as Mr Copeland on Monday.

“He was excited to welcome another child into the world later this year and we are devastated that his kids will grow up without their dad.”

Mr Copeland’s body was found on the second day of the latest search with more than 70 specialist emergency personnel that was launched after talks between the NSW coroner and the police. 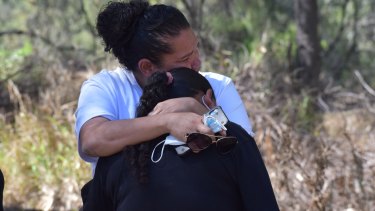 Superintendent Steve Laksa, the New England Police District Commander, told media last week that he had never seen such a significant number of resources poured into a search for an individual.

An initial search was launched immediately after he went missing, and another began a few weeks later after hundreds of community members marched through Moree.

Mr Copeland’s family have been critical of the search efforts undertaken by NSW Police over the last three months.

“Police told the media they never stopped searching for Gordon, but we don’t believe that’s true. Meanwhile, our family and supporters were forced to search the river ourselves. We spent over $8,000 on wetsuits, boats, cameras and other expenses,” Ms Fernando said. 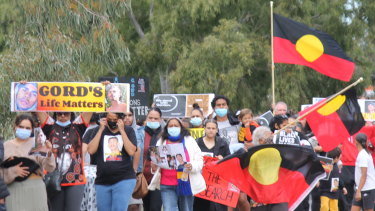 Crowds walk through the streets of Moree in July, nearly three weeks after Gordon vanished.Credit:Tahlor Swan

“We thank the Moree Gomeroi community and our supporters; [acting] Inspector Stephen Caldwell; the State Coroner; our employers who have given us time off during the search; local businesses like Woollies who pitched in; and the not-for-profits who have stood by us.”

The NSW/ACT Aboriginal Legal Service will represent Mr Copeland’s family in a coronial inquest into his death.

“He is one of 17 Aboriginal people (who died either in custody or in a police operation) whose coronial inquests we are currently acting in. We don’t want this work to be necessary. No one should be suffering senseless, lonely deaths in rivers, on streets, or in prison cells,” said the legal service's acting CEO Nadine Miles.

In a statement on Monday night, NSW Police said that investigators were continuing to prepare a report for the coroner.

Meanwhile, a police-led investigation, independent of local officers, is looking into the events leading up to Mr Copeland’s disappearance.

Could I be fined for not wearing a face mask on public transport?

Millions of Christmas deliveries backed up amid record-breaking orders