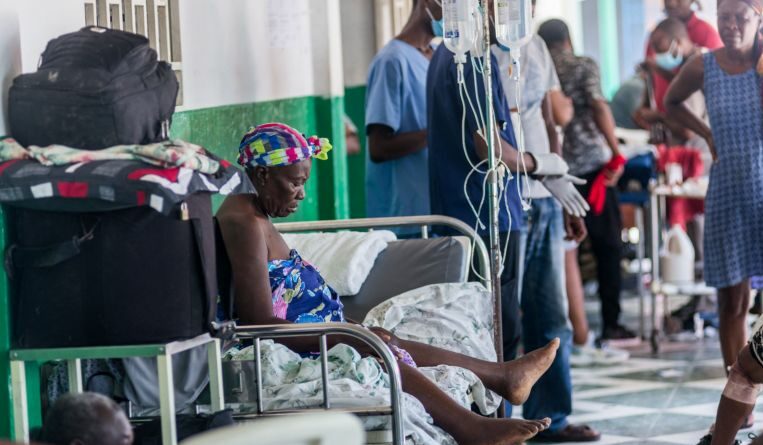 LES CAYES (AFP) – Hunched on benches, curled up in chairs or even lying the floor, those injured in the powerful earthquake that wreaked havoc on Haiti on Saturday (Aug 14) crowded an overburdened hospital near the epicentre. An official said the death toll has risen to 1,297.

The emergency room in Les Cayes, in southwestern Haiti, which was devastated by the 7.2-magnitude quake on Saturday morning, is expecting reinforcements to help treat some of the thousands of injured.

“At the time of the earthquake, there were only three doctors in the emergency service,” said Dr Michelet Paurus.

“This morning, it’s getting better because we received orthopedists, surgeons and almost 42 residents distributed across all the hospitals of the department.” Dr Rudolphe Steven Jacques, 26, came to the hard-hit area from the capital Port-au-Prince.

“The lack of equipment is chronic,” he told AFP, gesturing to a woman sat in a corner with a large open wound on her leg.

“This woman has been waiting for a while for me to do a suture but I don’t have a tray for that at the moment.”

Doctors and patients jostle in the small hospital rooms, as even more patients pour in.

“Many more injured are still arriving this morning, I wasn’t expecting that. They are coming from more remote areas,” Dr Jacques said, adding the emergency service workers were “doing our best to treat people.”

The violent quake destroyed 1,500 buildings and over 5,000 were damaged, trapping hundreds of people under rubble and leaving at least 2,800 injured, the country’s civil protection agency said.

Hospitals in the country’s third-largest city near the epicenter of the quake were quickly saturated with the massive influx of injured.

“When the earthquake happened… a tremor threw me in the air and I landed on my arm,” recalled Venel Senat, in his forties. “Neighbours came to help me get a taxi. I went to several hospitals, but they were overloaded.

“This morning I came here and I was finally taken care of. I had an X-ray for free and they also put this cast on, free of charge,” he said, as he waited for the medication prescribed to him to be available at the hospital, the pharmacy in town still shuttered.

Already treated but under observation, many injured settled on the lawns around the buildings, traumatised by frequent aftershocks and worried damaged structures may collapse.

“People are afraid to go back inside, but tonight it’s going to rain,” said Paurus, moving swiftly between departments.

“If it rains as much as we predict, we really don’t know what we will do. It’s one hit after another,” said Paurus.