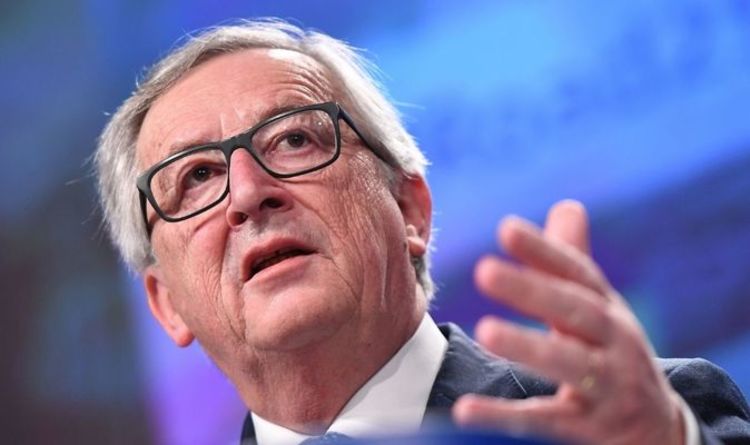 Angela Merkel discusses the delivery of vaccine doses to Ukraine

Despite being out of politics, the former EU official claimed the Chancellor suffered from “latent fatigue” which caused her to suffer from tremors. Commenting on the Chancellor, Mr Juncker insisted Germany’s leader had become fearful over the tremors she suffered during the early years of her leadership. Speaking on the RTL documentary ‘Angela Merkel – her path, her secrets & her future’, Mr Juncker claimed the German Chancellor suffered due to the sheer amount of work she undertook.

Commenting on an incident in 2019, he told RTL: “They weren’t for psychological or mental reasons, but rather latent fatigue.

Despite the tremors, Mr Juncker claimed the Chancellor had incredible energy for the role.

He added: “I’ve seen her in many nightly sessions when she was wide-awake.”

Mrs Merkel has served as Chancellor of Germany since 2005 and will step down in September this year.

The Chancellor has also been labelled as the de-facto leader of the European Union.

Ahead of her departure as Chancellor, Mrs Merkel held a joint press conference on Thursday with US President Joe Biden.

During the press conference, the pair confirmed their fear over the rising aggression of Russia.

During the press conference, the pair also addressed anti-democratic actions undertaken in China.

The US President said in response: “We will stand up for democratic principles and human rights when we see China or any other country working to undermine free and open societies.

“We are united, united in our commitment to addressing democratic backsliding, corruption, phony populism in the European Union or among candidates for the EU membership, or anywhere we find it in the world.”

“There is a lot of common understanding that China, in many areas, is our competitor; that trade with China needs to rest on the assumption that we have a level playing field.”

The pair, however, refused to be drawn on the issues and concerns surrounding the Nord Stream 2 pipeline.

The controversial pipeline has sparked concern in the US amid fears Russia will use it as leverage over Ukraine and its neighbours.

As the pipeline will flow directly into Germany from Russia, some critics have claimed it will strengthen the state’s monopoly over energy in Europe.

The project is expected to be finished in September and could deprive Ukraine of vital transit fees.