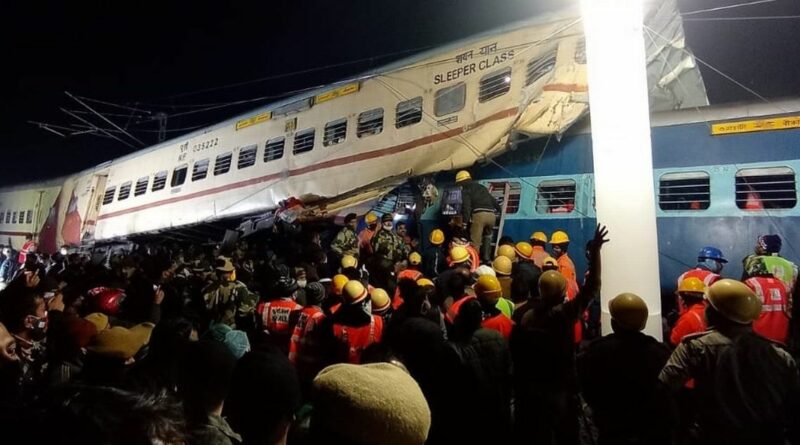 A freak derailment on a train carrying 1000 people has killed seven and left at least 45 injured.

The accident on the Guwahati-Bikaner Express occurred at around 5pm local time (11:30am UK) near Moynaguri in the state of West Bengal in India.

One of the coaches can be seen turned over on top of another in the aftermath of the crash.

Rescue efforts from authorities on the 12 affected coaches continued late into the evening with injured passengers taken to Jalpaiguri Sadar Hospital, according to The Hindustan Times. West Bengal government sources say that 10 were critically injured.

A passenger onboard described the accident to Indian news agency PTI, saying: "We felt a sudden shock. We were all rocking violently and luggage kept on upper berths tumbled all around."

High-profile political figures on the subcontinent issued public statements regarding the shock incident in the hours after, with Indian Prime Minister Narendra Modi being informed of the tragedy while he was attending a high-level meeting on India's Covid strategy.

Minister for Railways, Communications, Electronics & Information Technology Ashwini Vaishnaw tweeted that he was "heading towards the accident site", while Modi also took to the platform to respond to the tragedy.

He wrote: "Spoke to Railways Minister Shri and took stock of the situation in the wake of the train accident in West Bengal. My thoughts are with the bereaved families. May the injured recover quickly."

The ministry for railway travel has announced that a compensation package of ₹5 lakh (£4,929) for families of the deceased, ₹1 lakh (£985) for 'severely injured' passengers, and ₹25,000 (£246) for people with minor injuries.

Analysis: Trump was wrong about the law, Obamacare politics and his judges

From red wine to beer, the best ways to cure your hangover depending on what you drank the night before – The Sun

Britain is set for a one-day reprieve from the rain