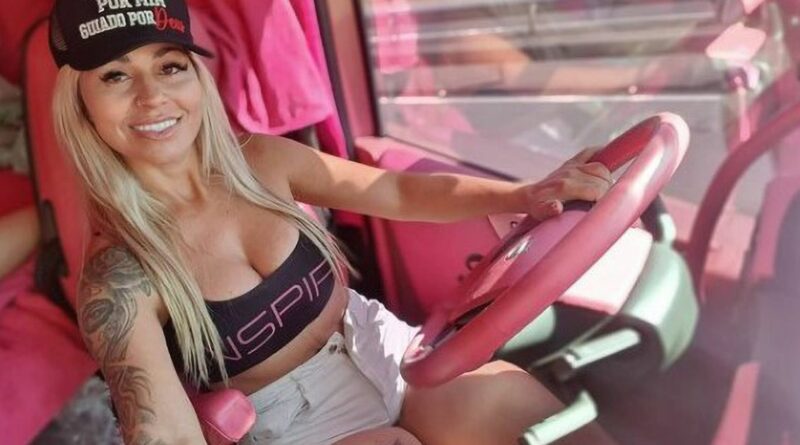 A sexy lorry driver has become a social sensation with two million followers as she lives her dream while travelling across Brazil in her bright pink HGV.

Sheila, who has numerous tattoos all over her body, regularly posts images to her Instagram and video footage to YouTube.

The blonde bombshell has worked as a lorry driver for 11 years, transporting fruit and vegetables to major cities such as Sao Paulo and Minas Gerais.

Sheila now earns more money as an influencer than she does for her lorry driving.

She told local media outlet Metropoles that she originally started posting content online because she knew that “it made money” and today she reportedly makes more money as an influencer than as a lorry driver.

Her pink Scania is now fully equipped with a kitchen, a TV, and it even reportedly has curling irons.

Sheila explained that she had always wanted to be a lorry driver but that she “got married as a child” and had to put her dreams on hold to raise her children.

At the age of 27, her dream came true and she began driving heavy vehicles.

Sheila said that the reason she chose pink as the colour of her lorry was simply because it "represents for me the milestone of a winning woman, who came from nowhere, from the countryside, and today has her own things. Yes it is marketing, but it is also a symbol of women in a very masculine world".

She explained that she fights the image of the trucker world as being dominated by men with her femininity.

Her photos display her great pride in taking care of herself and whenever she has free time on her schedule, she takes care of her hair and toenails.

She also explained that she had silicone implants in her bottom but had them removed in 2019, saying: "My back hurt, I work a lot while sitting down. I no longer recognised myself."

Followers on Instagram will be used to her style as she typically wears a crop top, leggings or tight jeans and sports shoes.

Users have posted harmful comments based on her looks, but Sheila says that she doesn’t care what they say.

She said: "I’m not here to fight, I’m here to make history."

To keep up to date with all the latest news stories, make sure you sign up to one of our newsletters here.

Shelia added: "What moves me is my dream! The goal I set for my life. This is my future, giving my children the life I didn’t have. I am a mother and father to my family. I think about seeing my family far away from the poverty and misery that I faced a long time ago."

With raising our children with twins Vitor and Vinicius, 21, Gabriely, 20, and Bernardo, 4, Sheila said the work of a truck driver is hard but she wanted to be able to support her children.

She added: "People who transport fruit and vegetables only sleep when they arrive. It’s been 11 years of sleeping well two nights a week and look, your body gets used to it."

In her dazzling pink HGV, Sheila has travelled over about 70% of the country, no mean feat given that Brazil is the 5th largest country in the world, after Russia, Canada, the USA, and China.