Home » ‘I turned my scars into strength’: Victoria gets LGBTI homelessness support

Elvis Martin would have been spared months of pain if he had been supported by appropriate services when he was disowned by his family at 17 for being gay.

The 25-year-old, who lived on the streets of Docklands for almost three months before a long recovery from major depression, has welcomed a state government announcement to fund homelessness support services for lesbian, gay, trans, intersex and queer Victorians. 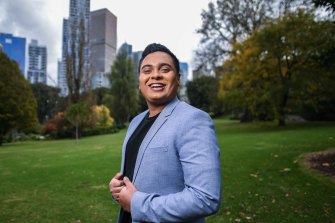 Housing Minister Richard Wynne will on Sunday announce the program to be jointly run by an LGBTI organisation and specialist homelessness service.

Mr Wynne said dedicated services were needed for the LGBTI community, which is more than twice as likely to experience homelessness than the rest of the population because of discrimination, family rejection and violence.

“Specialist services within the LGBTIQ+ community will give people the help they need fast, to recover and move on from homelessness,” Mr Wynne said.

Mr Martin, whose family lives in a religious country where being gay is punishable with death, said specialised homelessness services could save lives. LGBTI people have a very high suicide rate and Mr Martin said homelessness and poor mental health were often connected.

“When [people] don’t feel comfortable sharing about their sexuality and who they are and what they need, they can’t really get proper support and services,” Mr Martin said.

“That might have taken my life, you know what I mean? Just because I was not able to open up, just because I don’t know if someone will accept me or not, and will people understand me, or not?”

He said many young LGBTI people do not feel comfortable approaching the major homelessness providers, which tend to be religious.

Mr Martin — who also had a six-month involuntary stay in hospital and has lived in insecure housing — recovered from major depression after opening up to a caseworker while he was staying at a youth residential rehab run by cohealth community health centre.

“It was so hard for me to come out to them. But I did eventually come out and that made my life so much easier knowing that OK, these people are not going to judge me. They’re going to still be there for me, to support me.”

Mr Martin said he also saw homophobic psychologists and doctors who did not have a cultural understanding of his experiences.

He is now an ambassador at Youth Development Australia and advocates for young LGBTI people, and those dealing with poor mental health or domestic violence.

“I’m doing good … I turned my scars into strength.”

“Victoria has made great progress towards equality for LGBTIQ+ communities, but we still have work to do – this new homelessness support service is an important part of that work.”

Providers for the new homelessness support service will be appointed after a tender process.

London marathon 2019 – which celebrities are taking part in this year's race along with Mark Wright and Chris Evans?