Home » Indian government reassures citizens 5G does not cause Covid-19 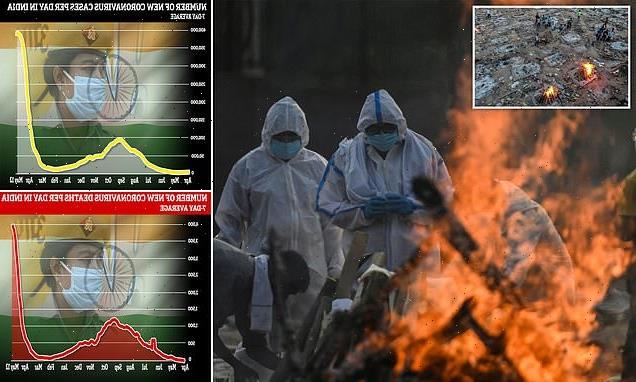 The Indian government has been forced to reassure its citizens that 5G has not caused the second wave of coronavirus following a spate of conspiracy theories circulating on social media.

Officials pointed out that there are no 5G networks in India as the country only approved 5G trials last week and they won’t start for months.

The government described the conspiracy theories as ‘baseless and false’ and urged the public not to be ‘misguided’ by the rumours.

It comes as the nation’s health officials said a record number of 4,025 people have been killed by Covid-19 in the past 24 hours, pushing the death toll past 250,000 as it battles a surge in infections. 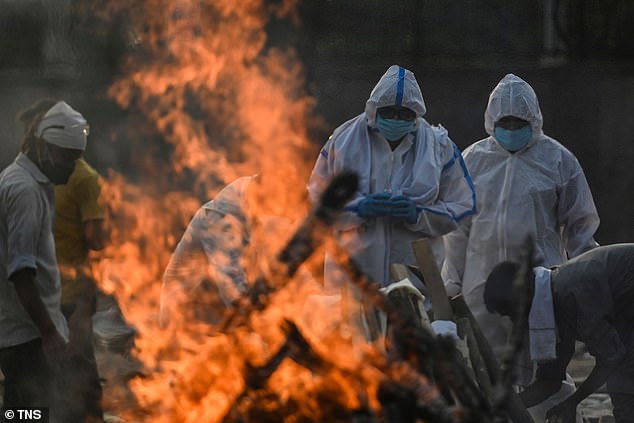 The Indian government has reassured its citizens that 5G has not caused the second wave of coronavirus which is ravaging the country and led to a record number of deaths. Pictured: Relatives wearing PPE perform rituals during a cremation of a Covid-19 victim in New Delhi on Tuesday 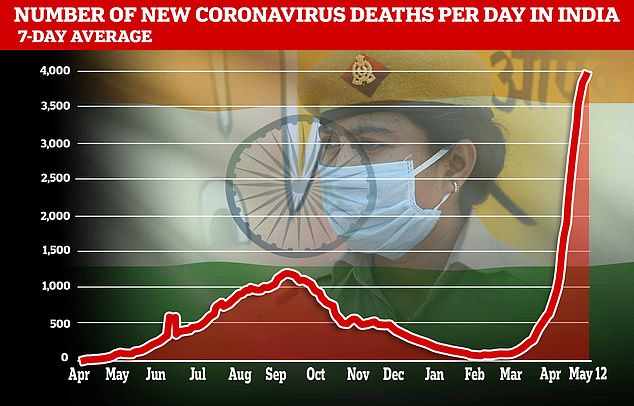 It comes as the nation’s health officials said a record number of people have been killed by Covid-19 in the past 24 hours, pushing the death toll past 250,000 as it battles a surge in infections

India’s Department of Telecommunication said in a statement: ‘Several misleading messages are being circulated on various social media platforms claiming that the second wave of coronavirus has been caused by the testing of the 5G mobile towers.

‘These messages are false and absolutely not correct… the general public is hereby informed that there is no link between 5G technology and the spread of Covid-19 and they are urged not to be misguided by the false information and rumours spread in this matter.’

The department also slammed the conspiracy theories as having ‘no scientific basis’ and pointed out that the testing of the 5G network has not yet started in India after the country only approved trials on May 4 – and they won’t start for months.

‘Hence, the claim that 5G Trials or networks are causing coronavirus in India is baseless and false,’ the department added in the statement.

A prominent message circulating on social media states that the radiation from cell phone towers ‘mixes with the air and makes it poisonous and that’s why people are facing difficulty in breathing and are dying’, reports Coda Story.

The department reassured citizens this is not the case. ‘Mobile towers emit non-ionizing Radio frequencies having very minuscule power and are incapable of causing any kind of damage to living cells including human beings,’ it said in a statement.

Earlier this year, India introduced a new law which gives the government considerable powers to order content to be taken down from social media platforms and require providers to identify their users.

In February, the Indian government asked Twitter to ban over 1,000 on the grounds that they were spreading information about the large-scale farming protests at the time.

The government alleged the accounts were not by farmers themselves – but by accounts backed by Pakistan and Sikh separatists. 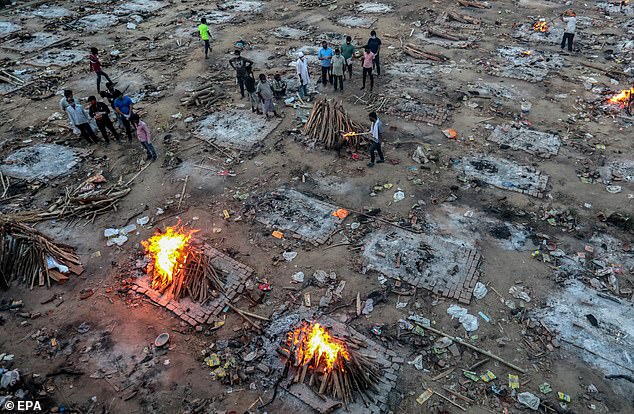 India has continued to be ravaged by Covid-19, with the country today announcing another record 4,205 deaths in the past 24 hours, pushing its overall death toll past a quarter of a million 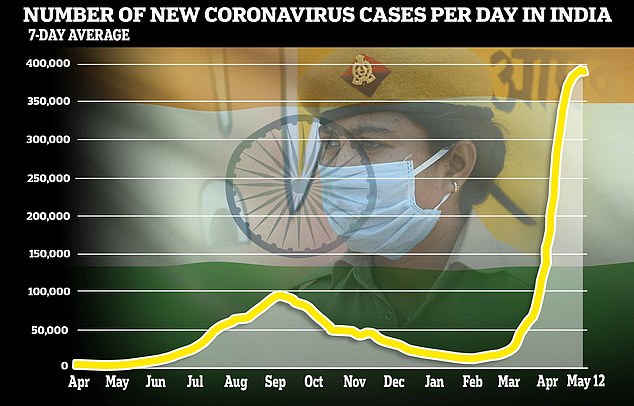 The daily coronavirus cases rose by a staggering 348,421, taking the overall number of cases past 23 million, according to health ministry data

But the move was controversial among human rights groups, with the Internet Freedom Foundation denouncing the blocking of pro-farmer accounts as ‘government censorship’.

India has continued to be ravaged by Covid-19, with the country today announcing another record 4,205 deaths in the past 24 hours, pushing its overall death toll past a quarter of a million.

The daily coronavirus cases rose by a staggering 348,421, taking the overall number of cases past 23 million, according to health ministry data.

Even with these depressing figures, experts believe the official numbers grossly underestimate the real scale of the epidemic’s impact, and actual deaths and infections could be five to ten times higher.

Meanwhile a leading virologist has said it was too early to say if infections had reaching a peak.

Shahid Jameel told the Indian Express newspaper: ‘It is still too early to say whether we have reached the peak.

‘There is some indication of the cases plateauing. But we must not forget that this is a very high plateau. We seem to be plateauing around 400,000 cases a day.’ 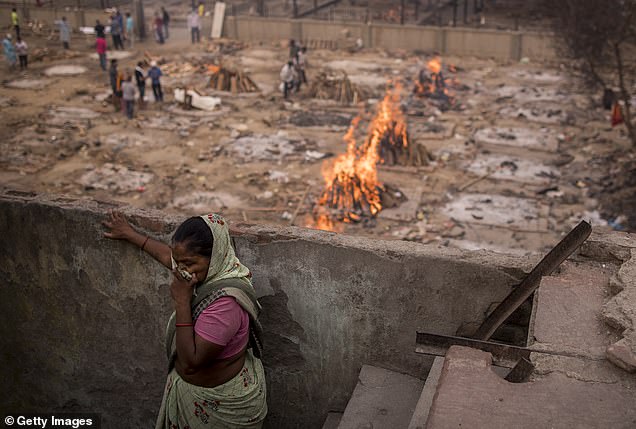 India, with a population of 1.4 billion people, currently accounts for one in three of the reported deaths from coronavirus around the world, according to a Reuters tally, overwhelming hospital and medical staff, as well as mortuaries and crematoriums. Drugs and medical oxygen are in short supply.

The brutal second wave of COVID-19 infections has spread from the cities to small towns and the countryside, ripping through a fragile health system ill-equipped for a crisis of this scale.

On Tuesday, authorities warned that nearly 90% of districts in the country are seeing a high positivity rate, sparking fears the coronavirus is spreading to India’s rural areas faster than it did during a surge last year.

Rural parts of India are also running short of wood for traditional Hindu cremations and scores of bodies are washing up on the banks of the Ganges river which flows through the most populous areas of the northern plains.

Akhand Pratap, a resident of Ghazipur district in sprawling Uttar Pradesh state, said that ‘people are immersing bodies in the holy Ganges river instead of cremation because of shortage of cremation wood’.

Even in the capital, New Delhi, many COVID victims are abandoned by their relatives after cremation, leaving volunteers to wash the ashes, pray over them, and then take them to scatter into the river, rituals usually conducted by the family. 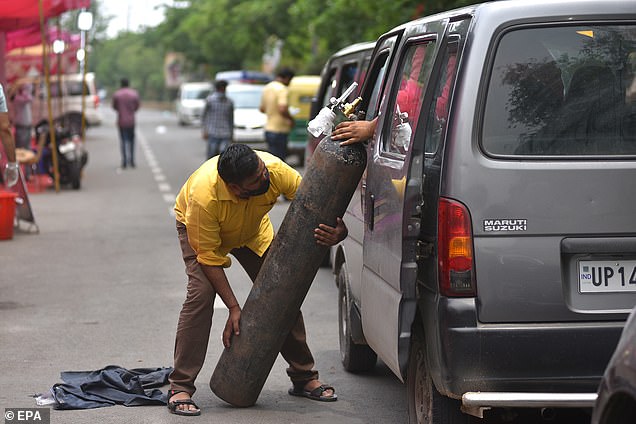 The relative of a COVID-19 patient carries an oxygen tank at a Sikh shrine, or gurdwara, where oxygen is made available by various Sikh religious organizations in the outskirts of Delhi on Monday

Infections have swelled in India since February in a disastrous turn blamed on more contagious variants as well as the government’s decision to allow massive crowds to gather for religious festivals and political rallies.

In a report published Wednesday, the World Health Organization said the B.1.617 variant first identified in India had been detected in at least 44 countries so far. The global health body has classified it as a ‘variant of concern’ that requires heightened tracking and analysis.

Vaccines are also running short, especially in Maharashtra state around the financial centre of Mumbai, and in the capital, Delhi, two of India’s hardest-hit regions.

Many states have imposed their own restrictions to curb infections, and the southern state of Telangana became the latest to announce a 10-day lockdown on Tuesday.

India’s second wave of the pandemic has increased calls for a nationwide lockdown and prompted more and more states to impose tougher restrictions that have hurt businesses and the wider economy.

‘Downfall time’: Why Trump’s case of COVID-19 may prove fatal to his campaign

‘There are no surprises’: why a rape allegation is unlikely to cause Trump much damage