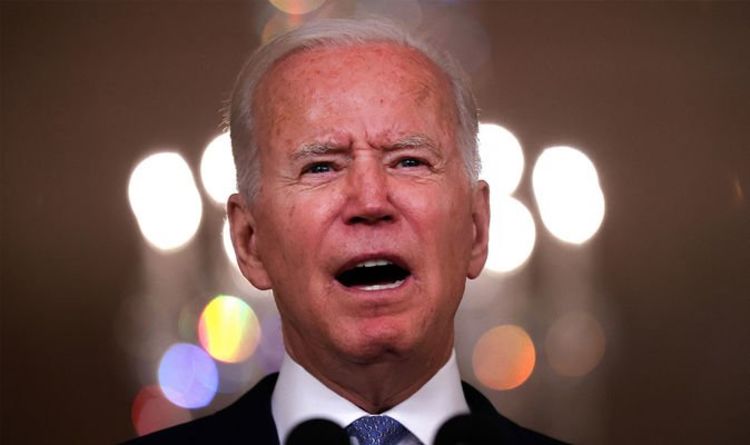 The Taliban continue to strengthen their hold on Afghanistan this week as the Islamist group claims to have seized the last remaining province holding out against their rule. Panjshir Valley, located in north-central Afghanistan, appears to have fallen after the Taliban boasted of now controlling the whole country. Spokesman for the terrorist group, Zabihullah Mujahid, issued a statement saying: “With this victory, our country is completely taken out of the quagmire of war.”

However, a spokesman for the resistance group, the National Resistance Front of Afghanistan (NRFA), has denied that the province has fallen.

Nevertheless, the Taliban’s swift takeover of Kabul last month sparked international outrage directed at US President Joe Biden, who remains under scrutiny for his decision to pull US troops out of Afghanistan.

On July 8 2021, Mr Biden said it was “highly unlikely” that the Taliban would take control of Afghanistan, but the group warned back in April that this was its plan.

At the time, the Taliban were unhappy with the pace of the US withdrawal, and therefore sent a threat in the direction of Washington.

As The Times reported, the Taliban taunted that they would beat the US and take power.

A commander said: “We are prepared and already present in the battlefield; our fighters are ready to target NATO troops as the trust deficit widens after Biden delayed US troops’ withdrawal.

“The Taliban are a true political entity in the Islamic emirate and we are already victorious in the war and our victory compelled the US to sign a deal with the Taliban.”

Last month, President Biden admitted that the Taliban’s takeover was much quicker than he anticipated.

He said that “this did unfold more quickly than we anticipated”, but maintained that he still backed the decision.

Mr Biden added: “Americans should not be fighting and dying in a war that the Afghan military is not willing to fight for itself.

“How many more American lives is it worth? How many endless rows of headstones at Arlington National Cemetery?

“If Afghanistan is unable to mount any real resistance to the Taliban now, there is no chance that in one more year, five more years or 20 more years, the US military boots on the ground would have made any difference.

“After 20 years I have learned the hard way that there is never a good time to withdraw.”

The situation in Afghanistan has also led to fallout in the UK, as Foreign Secretary Dominic Raab clashed with Defence Secretary Ben Wallace.

Mr Wallace had contrasted his department’s response to the crisis with the Foreign Office, which has come under fire amid reports Mr Raab’s officials had failed to read thousands of emails from MPs and charities detailing urgent cases of Afghans trying to escape from Kabul.

Mr Raab then said last Thursday: “Ben and I were taking the same assessment throughout until very late.

“The central assessment had been that Kabul wouldn’t fall until after the end of August and the evacuation of allied troops, and indeed there would be a steady deterioration throughout the remaining part of the year, so we were all working to the same set of assumptions.”

Tensions between the two departments first erupted in mid-August when Mr Wallace privately accused the Foreign Office of evacuating diplomats while leaving soldiers and Ministry of Defence staff to handle the fallout of the Taliban takeover of Kabul.

The Shadow Security Minister, Conor McGinn, hit out at the “unseemly fighting” on display between the two Cabinet Ministers.

“It’s embarrassing to watch and tragic for those terrified in Afghanistan, who are looking to Britain for a way out of the despair, but just see a government fighting like rats in a sack.

“We need a plan for those left behind in Afghanistan, and a focus on protecting Britain’s security, not this unseemly infighting at the top of government.”

Ketamine-like nasal spray could soon be available in the UK