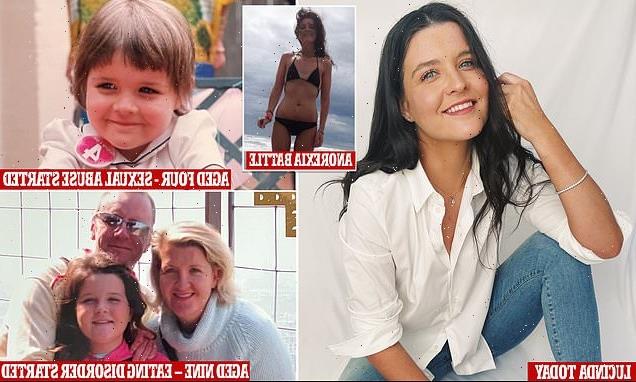 Lucinda was just four years old when a family friend started sexually abusing her. The torment led to a devastating eating disorder which left her suicidal at 18. Now, the brave 26-year-old tells her story for the first time

Lucinda Hoffman froze in her seat when the therapist queried: ‘Have you ever been abused?’

It was a question no-one had ever thought to ask.

For 14 years she had suppressed painful childhood memories, numbing her pain by obsessively restricting food and shedding kilos.

But now, the recollections were starting to flood back.

From age four, Lucinda was sexually abused by a 16-year-old family friend just metres away from their parents during household get-togethers.

Every fortnight for three years, the teenage boy would offer to teach her how to play handball outside while the adults chatted nearby. 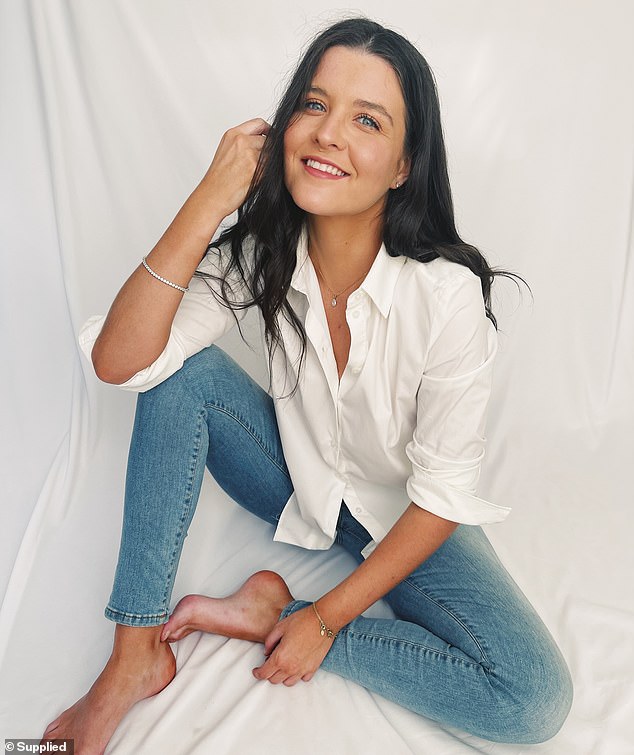 Lucinda Hoffman, 26, spent nine years suffering from an eating disorder before realising it was connected to the sexual abuse she suffered as a child

In reality, he would lure her into the car and lock her inside before subjecting the pre-schooler to sickening sex acts she was too young to understand.

‘The adults thought he was a really nice boy, teaching me how to play ball,’ Ms Hoffman, now 26, told Daily Mail Australia.

‘He would ask them for the keys to the car “to get the Gameboy”.

‘I remember it was uncomfortable and I didn’t want to be there.  And he would tell me to be quiet and “just do this then we can play ball”.’

Lucinda, unable to articulate what was happening, didn’t tell anyone about the attacks.

The years of abuse finally ended when Lucinda and her mother left Sydney for Perth when she was seven. But the torment was far from over.

The young girl, struggling to comprehend the painful emotions she was suffering following the sexual abuse, developed an eating disorder two years later.

It started with Lucinda overeating, in one instance hiding under the staircase to devour an entire loaf of bread. 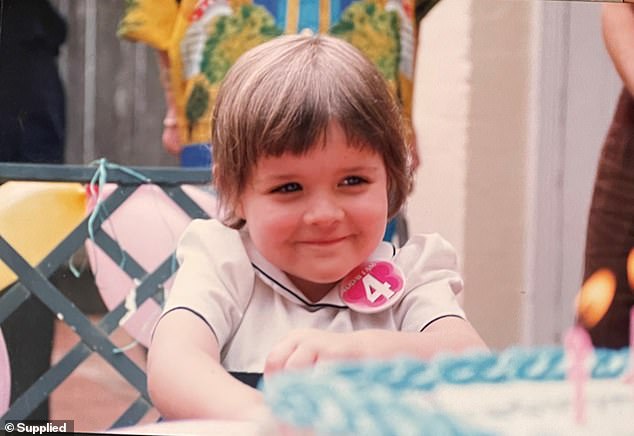 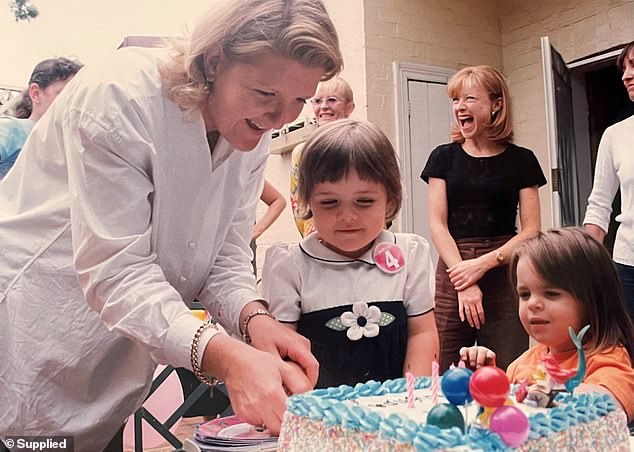 Only a little girl, she did not understand what was happening and could not communicate what she was experiencing

‘It was my coping mechanism. I had so much shame about what I had experienced,’ she said.

‘When you are little, the only feeling you have is that the behaviour is gross, so then you think you are gross and something is wrong with you.

‘I had all of these emotions going through me but no ways to understand them. So I began overeating to numb the pain.’

Around the same time, as the nine-year-old girl grappled to make sense of the vile acts committed against her, she copped another devastating blow when her father, Steven, was diagnosed with a HIV-related brain tumour.

Three years later, as his condition rapidly declined, Lucinda and her mother flew to London – where he had lived since the marriage ended – to see him in the hospice.

The brain tumour had left her ‘energetic and fun’ dad extremely sick, suffering from hallucinations and reduced to a ‘child like’ state as he received constant care.

A few weeks later, after spending every moment by her beloved father’s side, reading books and feeding him, he sadly died.

‘I was there the last minute he took his breath,’ Lucinda said. 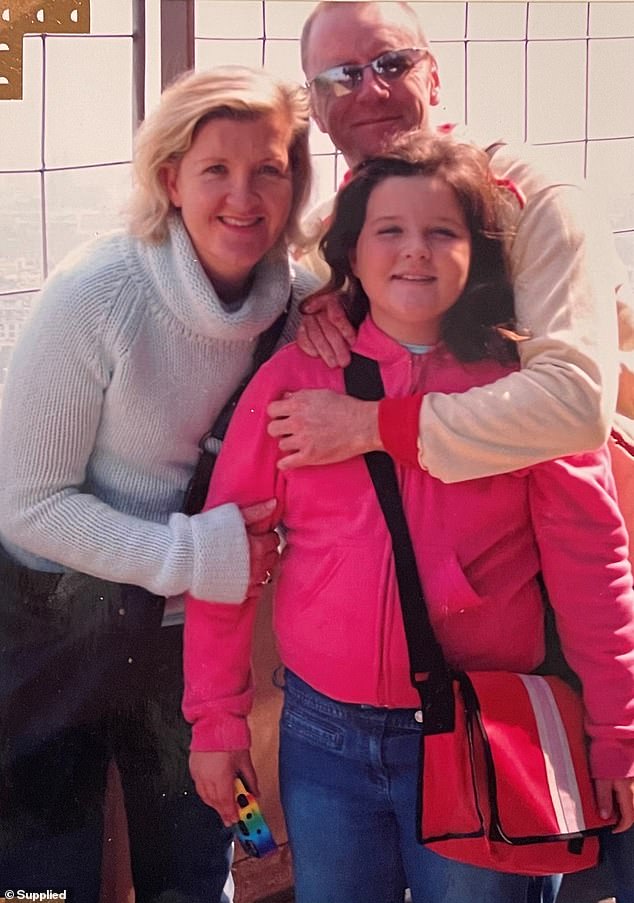 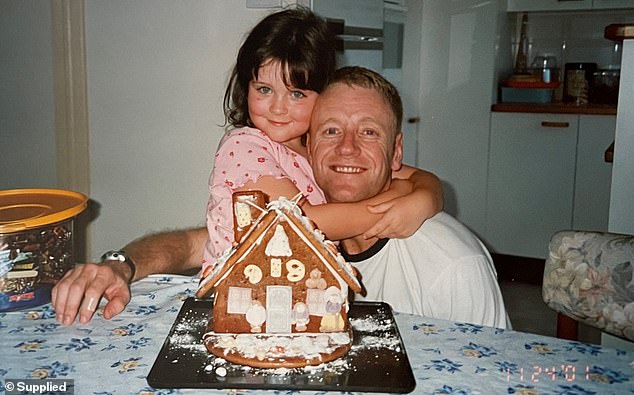 In 2007, Lucinda tragically lost her father Steven (pictured together when she was aged six) to  cancer

‘His partner started crying, then it hit me that he wasn’t moving. Then I dropped to the ground, crying.’

After her father’s death, Lucinda’s eating disorder went rampant. She became anorexic and controlled her diet as a way to escape stress.

Despite her obsession with food and fluctuating weight, she remained in denial about her problem.  And because she was never looked drastically underweight, no one around her picked up on the disorder either.

‘My whole world revolved around food, my weight, my body image. It was all I thought about 24/7,’ she said.

‘But I thought “I’m not a skeleton, so I am not sick”. I saw top psychologists. I went to top private schools but no-one questioned that I had a disorder.

‘I was a walking advertisement for PTSD  [Post Traumatic Stress Disorder].’

When Lucinda turned 18 and was in Year 12, her anorexia became more severe after she was sexually assaulted by a male student. In eerily similar circumstances, he locked her in a car and would not allow her to leave until she performed oral sex.

Months later, she reached her lowest level as she struggled to cope with her first year at university. She started a series of eating rituals with certain foods off limits, strictly planned meal times, anxiety over any disturbances to her routine and a ban on eating past 6pm. 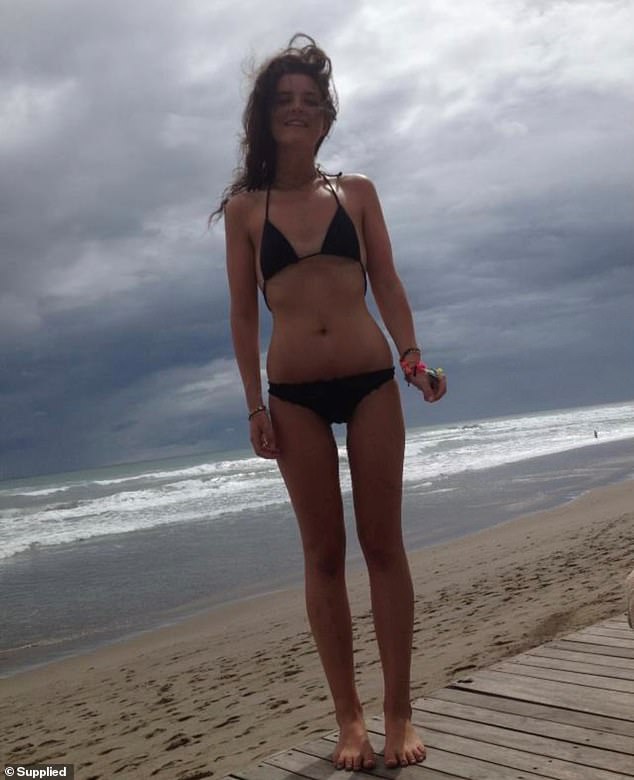 At her lowest point, Lucinda would be consumed with thoughts about restricting her diet from the moment she woke up 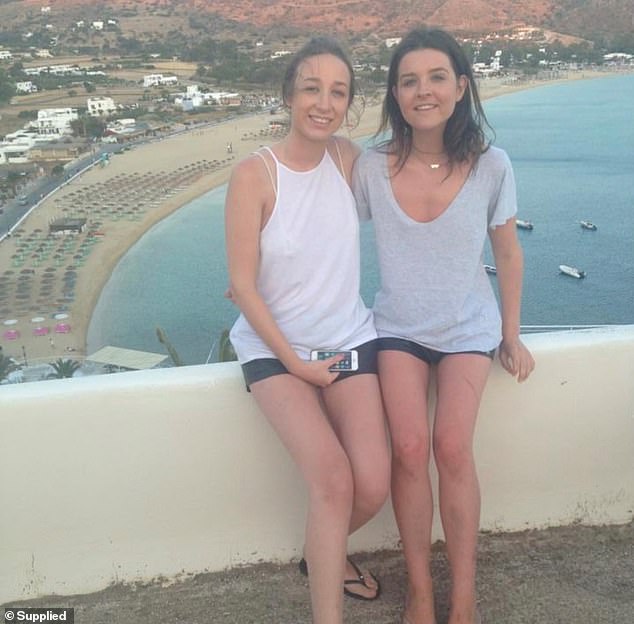 She hid the illness from her friends, and would become anxious if she did not eat on schedule

Within six months, she dropped six kilograms to 49kg.

‘From the minute I woke up I weighed myself and if I was 100 grams over the weight from yesterday, I would be upset the whole day,’ Lucinda said.

‘One time mum came home with a chicken and I threw it on the floor. The minute I did, I would be upset with myself but I could not explain the fear.

‘It is a complete obsession, people think it is narcissistic, but I thought I was so disgusting and unworthy.’

In distress, Lucinda went to a psychiatrist who finally diagnosed her with anorexia after a secret six-year battle with the illness.

But the diagnosis did little to halt the crippling effects of the disease, which saw her retreat from social activities and struggle to enjoy normal activities.

Plunged into a deep depression, she started contemplating taking her own life and wrote a suicide letter – but dropped the pen when she realised the impact it would have on her mother.

Instead she decided to reach out to her mum for help, and after Lucinda revealed the extent of her anguish, she was booked into a rehab centre. 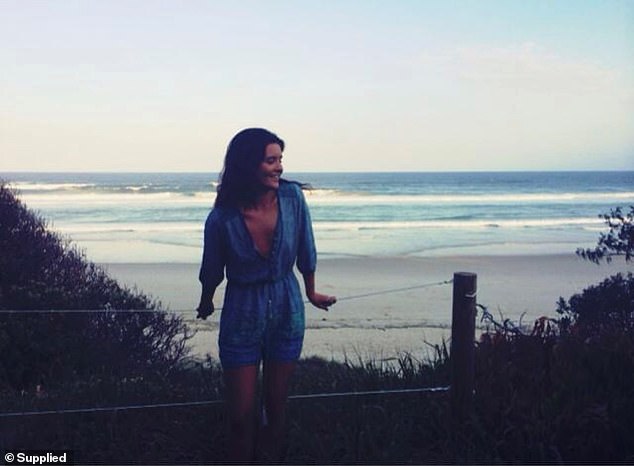 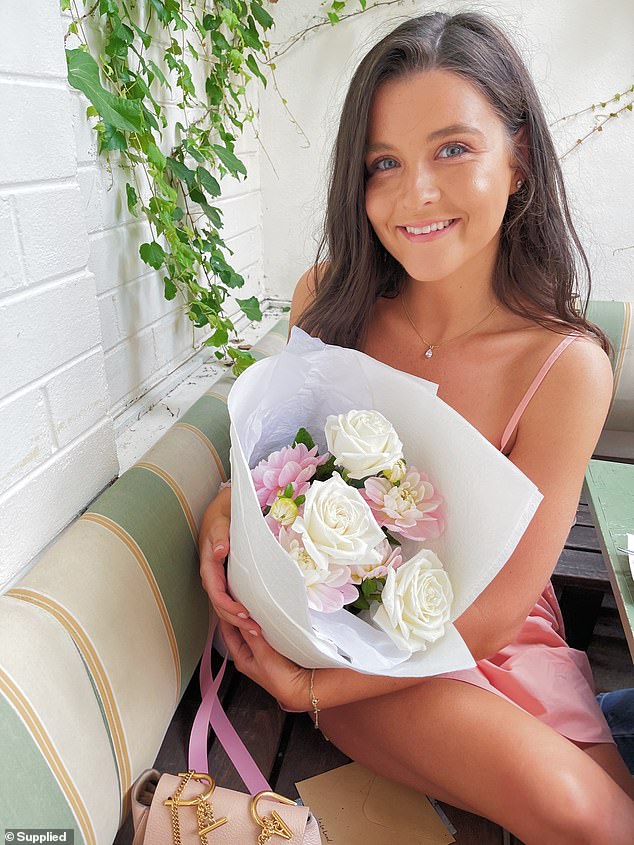 In December 2014, Lucinda flew to Byron Bay for a seven-week rehabilitation program where she underwent various types of therapies to combat her anorexia.

She realised her childhood experiences with the family friend were acts of sexual assaults, and the 14 year-old secret finally came to light.

‘The therapist asked me If I had been abused. It was like the suppressed memories were a box rattling around that wanted to be opened and with that one question the lid popped open and I couldn’t put the thoughts back,’ Lucinda said.

‘I had all of these memories I didn’t want to look at. But when she asked me, it felt like the first time I could finally breathe. It was the first time someone saw me.’

Lucinda was diagnosed with complex PTSD and learned that her anorexia was a coping mechanism she used to shield herself from thoughts of the abuse.

While the rehab was a major step in her healing journey, she said the process of accepting what happened to her was still ‘very slow’.

After the program, Lucinda and her mother moved to Byron Bay to continue her recovery with the therapist, where they stayed for several years before Lucinda recently returned to Sydney.

She said recognising the role the sexual abuse played in her anorexia was pivotal in her recovery.

‘With the memories came a huge amount of grief. It was like losing my dad. I was grieving all of the things that were stolen from me. My first kiss. The fun moments from my childhood that were replaced with worry and stress. 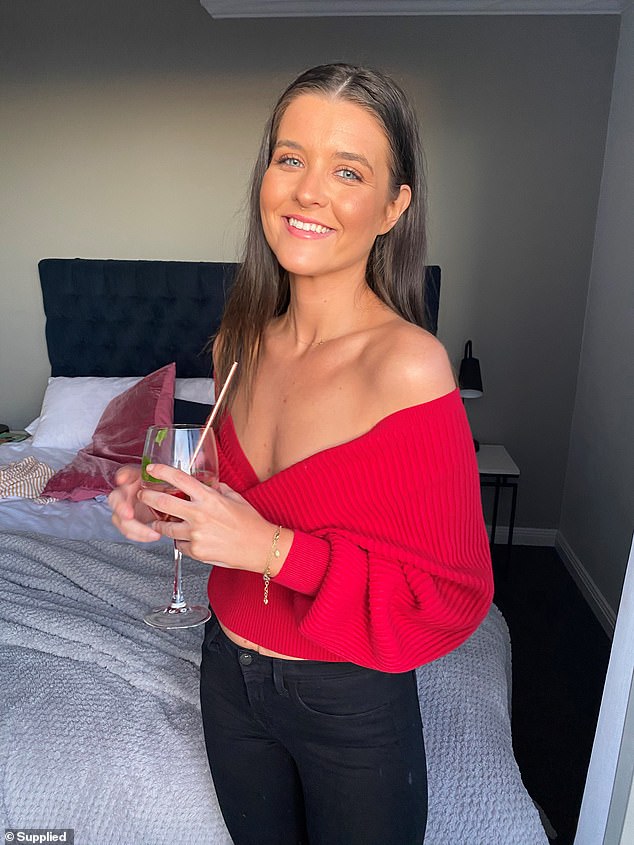 Lucinda has written a memoir about her journey, titled Behind Those Blue Eyes

‘But when I started grieving for the abuse I had experienced, I would start to notice minutes and hours would go by without me checking if I had put on weight or that I was planning meals.

‘Then I started going days where I didn’t check my rib bones or if I had thigh gaps, and then it started to fade away.’

Lucinda, who is now studying psychology and mentoring young girls with eating disorders, said she hopes sharing her story will encourage others to speak out about sexual assault.

‘People need to know, we need to keep talking about it. The more we talk about it, the less of a stigma there is around it, so we can have conversations to know that it doesn’t always happen in dark alleyways or with strangers – it can happen right in front of your eyes,’ she said.

‘Being abused isn’t a death sentence, it’s something you can heal from. I am living an amazing life, I am at peace.  The shame I felt all of my life is not mine to carry.

‘No matter how scary or how dark it looks, there is always hope.’

Lucinda has written about her journey in a new memoir called Behind Those Blue Eyes.

If you or someone you know is experiencing sexual abuse or family violence contact: 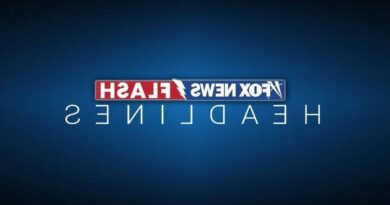