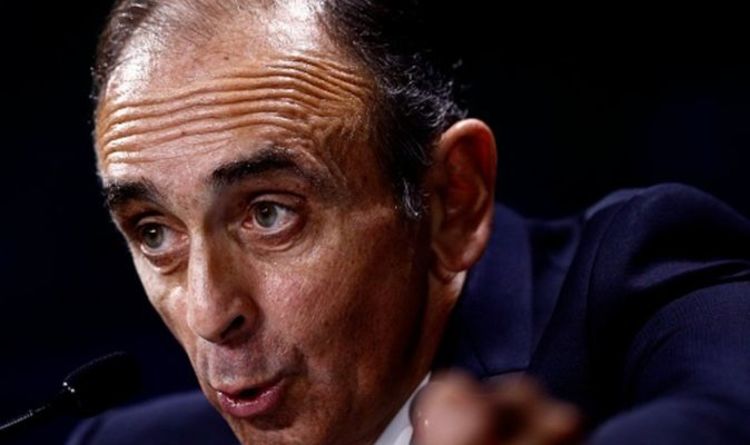 The French TV star told BFM that an organisation had been set up that is preparing a possible bid. He said: “I’ve always been in politics, I still am more than ever before.

“Everything is ready. All I have to do is decide and push the button. I decide when and how.

“I will not let these people down.

The pledge came as a new poll saw the French right-wing pundit making it to the second round of the presidential election in April along with President Emmanuel Macron, confirming earlier polls that saw Zemmour overtaking far-right leader Marine Le Pen.

The chat show star, who has been convicted for inciting hatred, has dominated the French airwaves in recent months with provocative comments about Islam, immigrants and women.

An Ifop-Fiducial poll for newspaper Le Figaro and TV station LCI, published by BFM TV, showed Zemmour would win 17 percent of the first-round vote, well behind Macron with 25 percent but just ahead of Le Pen on 16 percent, with conservative Xavier Bertrand garnering 13 percent support if he wins the primary for the Les Republicains party.

Mr Zemmour and Mr Macron have not yet said whether they will run.

For more than a year, polls have shown Rassemblement National party leader Marine Le Pen easily making it into the second round, setting her up for a repeat of the 2017 election, when she won 21.3 percent of the votes in round one but lost to Macron’s 66.1 percent in round two.

But last month two polls showed Mr Zemmour jumping into second place for the first time ahead of Ms Le Pen, whose RN party has dominated the French far-right for decades.

An October 6 Harris Interactive poll showed the talk-show host winning 17 percent in round one, up four points on a late September poll and ahead of Le Pen’s 15 percent.

In his latest round of controversial remarks, Mr Zemmour said in an interview with BFM on Sunday that women earned less than men because they chose low-paying professions.

Mr Zemmour lost his daily job intervening on CNEWS in mid-September after the CSA (Superior Council of Audiovisual media) stated that a news channel could not have a potential candidate working 5 days a week on-screen.

But according to a count made by Libération, even without this TV position, Eric Zemmour has been the most tweeted hypothetical candidate by several official news channels since September.