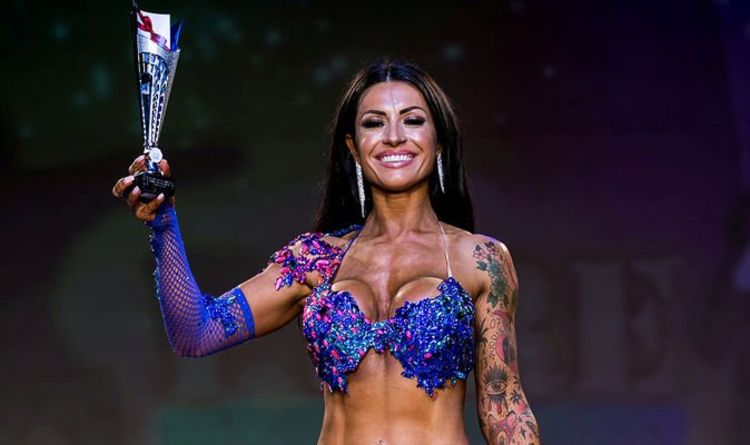 Anca Nicoleta Ward started working towards a career in fitness nine years ago and has quickly become one of the biggest names in the business. Despite having one son, two stepchildren and even a grandson – she has dedicated herself to becoming a world champion.

The 38-year-old gran moved to England from Romania 21 years ago and is the current British champion in the “Mums That Lift” and “Bikini Wellness” categories.

Ms Ward is often one of the older competitors in the field, but has no desire to stop doing what she loves anytime soon.

She said: “Thinking about it, I must be the first professional bikini wellness champion to be a grandma.

“Everybody always asks how long I want to do it for. I’m not sure, I’m going to do it for as long as I enjoy.

“All I want to do right now is retain my titles at the World Championships in November and get my tiara.

“They say stop at the top – but it’s a challenge for me. I still don’t like failure – but things can go wrong, and the body can turn on you at the last minute. The whole process is expensive, it’s a little bit selfish and you do need the support at home which I have.”

Strangers often praise Ms Ward for her physique, with many being in awe of how she looks.

The gran added: “I went to do some shopping a few days ago and some man said he saw my on the tele and asked for picture, as his missus would be jealous. It felt good but a little crazy! People on the street compliment me all the time.

“It feels nice, but I always think people just see the end result – they don’t see the hard work. For example, I practise posing every day leading up to the competitions for 30 to 45 minutes.

“You have to pull sexy poses but it’s hard. You’re covered in fake tan, sweating from nerves and high on adrenaline – but you’ve got to suck your tummy in.

“I also prep food for four hours every evening.”

Ms Ward explained that she consumes up to 3,000 calories in the off season by eating foods such as rice, fish, potatoes and chicken.

According to the bodybuilder, she thinks she looks better now than she did when she was younger – but added that what she does has become a way of life.

She said: “My first competition was after I had my son.

“After having Teddy and starting weight training and I was in the best shape I’ve ever been in. I looked better in my thirties than I ever looked in my twenties.

“It’s all about training hard and turning it into a lifestyle. I don’t drink, I don’t smoke – a lot goes into it.”

Doctor returns to work after recovering from coronavirus