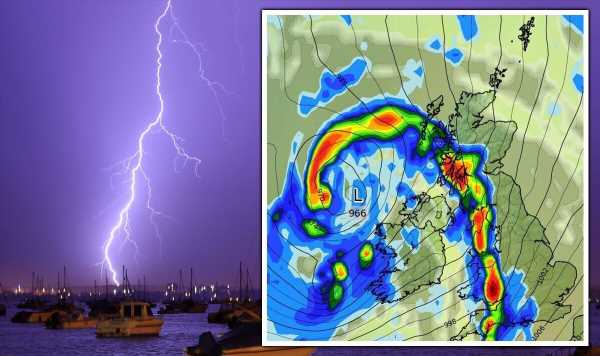 The Met Office has updated both of its weather warnings to tell the nation it can now expect thunder, lightning and winds of up to 70mph across large areas. The leading forecaster had initially released these warnings yesterday. But just before 9.30am today, it made an amendment, and added: “Stronger wind gusts inland and also to mention the chance of lightning. Area extended to include Isles of Scilly.” In broad terms, the warning covers south eastern and western areas of England, Wales, the north east, parts of Northern Ireland and a small section of Scotland.

In Northern Ireland and Scotland the warning is for wind. The Met Office says: “A spell of strong southerly winds will develop during Thursday morning, with gusts of 40-50 mph inland and perhaps briefly 60-70 mph along some exposed coasts, accompanied by a short period of heavy rain. Winds easing from the west during the late morning and early afternoon.”

People can expect some delays on roads, rail, air and ferry transport, and high sided vehicles may become exposed on open routes including bridges. Those living near the sea should be careful of large waves hitting the coastline.

The warning for these areas is already in place and has been from 8am, but will expire at 2pm.

A separate rain and wind warning has been issued wind and rain and has been active since 9am. This one will go on for longer – and is not due to stand down until at least 7pm.

Under south west England and Wales is where the most areas are set to be affected. In the south west they are: Bath and North East Somerset, Bournemouth Christchurch and Poole, Bristol, Cornwall, Devon, Dorset, Gloucestershire, Isles of Scilly, North Somerset, Plymouth, Somerset, South Gloucestershire, Swindon, Torbay and Wiltshire.

The Met Office says: “A narrow band of rain, heavy at times and briefly intense with a chance of lightning, will move eastwards late on Thursday morning and into the afternoon, clearing Cornwall and west Wales during the morning and Kent during the evening. A total of 10 to 15 mm of rain is likely to fall in a one to two hour period, with 20-25 mm in a few places.

“With saturated ground, this is likely to lead to a fair amount of surface water on roads and flooding in one or two places. Strong winds will be an additional hazard with some gusts of 50-60 mph inland and perhaps briefly 60-70 mph along some exposed coasts.”

In terms of what to expect, the forecaster says spray and flooding on roads is likely, which will make journey times longer as people reduce their speed. This could also cause some delays to rail, air and ferry travel. Flooding of a “few homes and businesses is possible,” it adds and people should also prepare for some short term power loss.

The unsettled theme will continue tomorrow, into the weekend and throughout next week. The Met Office says: “Monday is likely to bring a mixture of sunny spells and showers, with the heaviest and most frequent to the north and west, where accompanied by strong winds.

“This theme is likely to continue through the remainder of the week, with western areas remaining generally unsettled with rain and stronger winds more likely.”

Into December, however, things are set to become more settled. The forecaster added: “In the south and east, however, there is a chance that high pressure may become more influential, leading to drier weather with temperatures expected to remain close to, if not slightly above average for this time of year, but with greater scope for overnight frost.

“The remainder of the period remains uncertain, however there is potential for some more widespread settled conditions.”

Mont Blanc: Part of glacier could collapse in next few days, expert warns