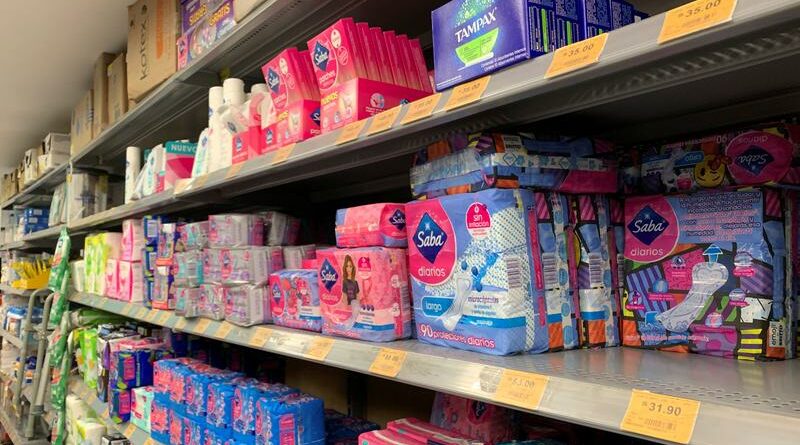 MEXICO CITY (Reuters) – In Mexico City, one of the world’s biggest cities, a product that many women relied on as a monthly necessity is gradually disappearing from the shelves: tampons with plastic applicators.

Women’s sanitary products are seen on the shelves inside a supermarket in Mexico City, Mexico February 16, 2021. REUTERS/Carlos Jasso

With a lifespan of nearly 150 years, the applicators join plastic bags, forks, cups, balloons and straws as single-use plastics that Mexico City has banned as it pushes forward with a greener agenda.

Women’s groups, however, said the city’s ban on the applicators is an attack on human rights and creates a phenomenon of “menstrual poverty” because alternative products, like organic tampons or silicone menstrual cups, are more expensive and often hard to find.

“A measure that might sound very progressive and well-intentioned with an environmental commitment is neglecting the needs of women,” menstrual activist Sally Santiago told Reuters.

Mexico’s 126 million people produce 6,000 tonnes of plastic waste a year, the government said. The city’s plastics ban has also prompted controversy from industries that produce now-prohibited items. Producers argued that products should be regulated, but not banned.

However, she said there are alternatives available, including tampons with cardboard applicators, menstrual cups and organic tampons.

“We made a comparison and even an analysis of the groups of women who use tampons and we believe that it can be perfectly covered with this other type of material,” Robles said in an interview.

Robles said about 7% of merchants were still “lagging behind” but that officials believed compliance would increase.

A box of organic tampons sold on the popular e-commerce site Mercado Libre had an average price equivalent to 51 to 100 pesos per tampon ($2.54 to $4.99), according to Anahi Rodriguez, spokeswomen for menstrual rights organization Menstruacion Digna Mexico.

At that price, alternative products could be out of reach for many women in Mexico, where more than 40% of the population lives in poverty, according to government data.

“This could be detrimental for people with lower incomes, which is worrying because school and work absenteeism could increase,” Rodriguez said.

Companies should shoulder some of the responsibility to make tampons with cardboard applicators or no applicators more readily available in Mexico, Robles said.

She said city officials were in talks with producers for nearly two years about making more non-plastic alternatives available before the ban started.

“It seems to us that it is part of the commitments that entrepreneurs should assume,” Robles said.

Even if alternative products are more readily available, the government is still removing an option from women, activists said.

“Although there are alternatives, if women’s structural conditions are not optimal, we are facing a scenario of false freedom of choice,” Santiago said.