Western countries have introduced a package of sweeping economic sanctions to punish Vladimir Putin for his invasion of Ukraine. Many of these measures have targeted Russia’s financial sector and its major banks, cutting them off from capital markets in the West. Others have focused on individuals close to the Kremlin, as well as major industries in the energy and technology sectors.

The results of this unprecedented action have caused economic turmoil in Russia, causing panic among ordinary people.

An Express.co.uk source in Russia said there were queues at shops, as retailers had to keep changing prices due to the collapsing ruble.

They added: “My friend said she couldn’t renew her work contract today, money she saved is now worth nothing and everyone is panicking.”

The new sanctions have caused the national currency to plummet in value.

The ruble initially slumped by 30 percent on Monday before easing back to stand 20 percent down.

The ruble’s crash forced the Russian Bank to double interest rates to 20 percent.

The collapsing value of the ruble erodes the currency’s buying power and could wipe out the savings of ordinary Russians.

Reports were also emerging that banks were starting to run out of money, as people desperately tried to withdraw cash.

William Legate posted on Twitter: “Russian banks are starting to run out of money.”

He added a photo of an ATM which displayed the message: “Sorry, no money in such currency.”

Sberbank, Russia’s largest bank and where most Russians have an account, said it had experienced “significant outflows of deposits in a very short time.”

Chris Weafer, chief executive at consultancy firm Micro-Advisory and based in Moscow, told the BBC: “This set of sanctions is hitting ordinary Russians to an extent that previous sanctions have not and people are now becoming aware of that.

“People are a lot more fearful.

“There is already talk about some companies having to either go on reduced working hours, or even suspend production because they’re not able to access maybe key parts from the West due to sanctions or due to trade limitations, so there’s a great deal of concern on the street.”

The scenes brought back memories of the economic turmoil at the beginning of the 1990s, when Boris Yeltsin introduced his market economic reforms.

These initially led to spiralling inflation that destroyed people’s savings.

In the first year of the reforms, retail prices in Russia increased by a staggering 2,520 percent.

Russia was again rocked by economic woes in 1998, when it had to devalue its currency and default on its debt in the wake of the Asian financial crisis.

Dmitry Peskov, the Kremlin spokesman, tried to reassure the public that things would calm down and get better.

He said: “These are heavy sanctions, they’re problematic, but Russia has the necessary potential to compensate the damage from these sanctions.” 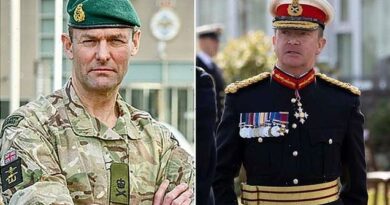 Who is Priti Patel’s husband Alex Sawyer? Do they have children together? – The Sun