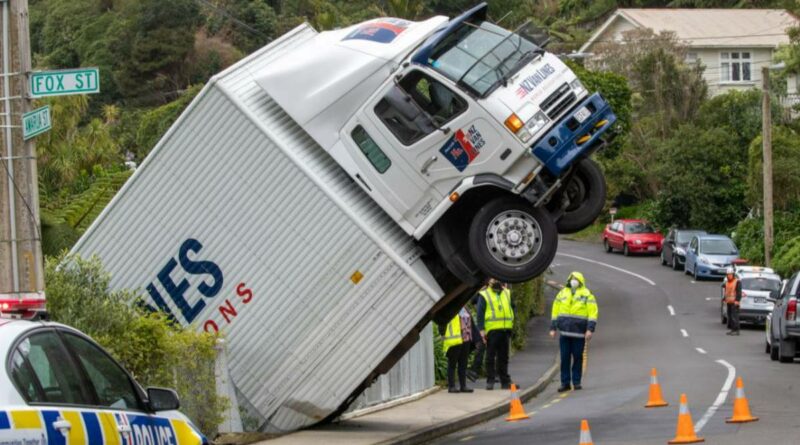 A truck has fallen off a residential street in Wellington, partially blocking it.

The NZ Van Lines lorry has fallen off Awarua St near the intersection of Fox St in Ngaio. A police spokesperson told the Herald they found the truck down the embankment and in the creek about 9.10am.

No one was injured, but part of the road is blocked. Police are seeing if the truck can be towed out.

NZME senior videographer Mark Mitchell says the driver “abandoned ship”, jumping out of the cab when the truck started to drift backwards.

“It’s a lucky escape for the driver, I’d say. If you look at the height of where the cab is you’re looking at four or five metres so he probably made the right choice.”

Mitchell says the engine of the truck is still running and removing it from the embankment is shaping up to be quite the operation.

“They’ve got a crane coming in a bit later, they’ve got to cut the power to the lines above – it’s going to be quite a mission to get it out.”

The Herald has contacted the Wellington City Council and NZ Van Lines for comment.

Paris Hilton reveals she's ready for motherhood with her boyfriend