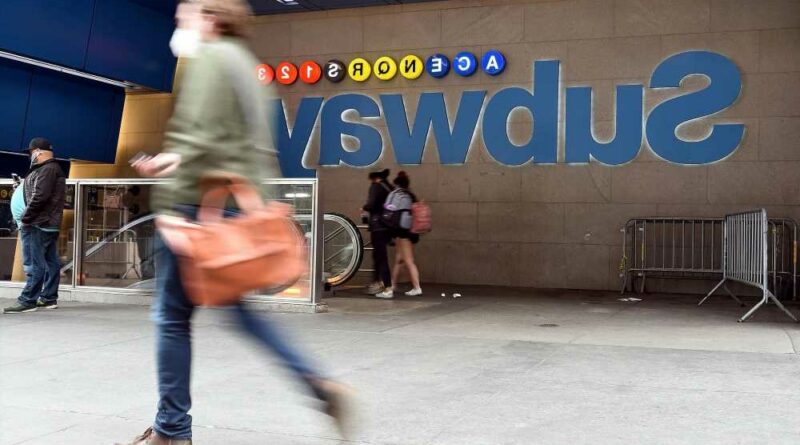 An MTA employee was assaulted and a man was slashed in separate, unprovoked attacks in the Times Square subway station Wednesday morning, authorities said.

The female train service supervisor was on the southbound 1, 2 and 3 platform around 7:40 a.m. when another woman started screaming — and then pushed and punched her without provocation, according to the MTA and police sources.

The victim, who suffered bruising to her face, declined medical attention, according to police. She was on duty at the time.

The suspect fled on a southbound 7 train, cops said.

Cops described her as in her 30s, around 5 feet 4 and last seen wearing a yellow jacket, a black sweater and black pants.

About an hour-and-a-half later in the same station, a 35-year-old man was sitting on a bench when a stranger approached and started speaking to him, cops said.

The victim took out his earbuds and asked, “Are you talking to me?,” police said.

The suspect then spat on the victim and slashed him on the left side of his face, according to authorities.

The victim was taken to Mount Sinai West Hospital for treatment.

The suspect, described as in his 20s and around 6 feet tall, took off.

Meanwhile, two other women were attacked in the subway system in Queens and Brooklyn.

A 21-year-old woman was slugged in an unprovoked attack on an F train at 75th Avenue and Queens Boulevard around 8:30 a.m., cops said.

The suspect, a 29-year-old man, was acting erratically and attacked the victim without saying a word, police said. Good Samaritans held him down until police arrived.

The woman was taken to NYC Health + Hospitals/Queens with injuries to her face.

The suspect is in custody and charges are pending.

Hours later, a woman was stabbed in the back and slashed in the shoulder during a dispute at the Pennsylvania Avenue station near Livonia Avenue in Brownsville around 10:45 a.m., cops said.

Her attacker, described as a man around 5 feet 5, who was last seen wearing a gray hooded sweatshirt and navy pants, fled south on Sheffield Avenue, cops said. It was unclear if the victim knew the suspect.

The incidents come amid a spate of assaults on MTA workers and straphangers — as well as a recent flurry of violence in Midtown.

On Monday, subway conductor Kevin Rivera, 40, was attacked by an “unhinged” man who spat at him and threatened to “cut” him at the Flushing-Main Street station, the victim told The Post.

Off-duty subway worker Gerard Sykes, 52, was stabbed and slashed with a yellow boxcutter around 11:20 p.m. May 5 at the Crescent Street station in Cypress Hills, Brooklyn, according to the NYPD.

A subway cleaner at Brooklyn’s Franklin Avenue station was hit over the head by a U-lock-wielding bike rider late last month — after the cleaner asked the man to move his two-wheeler out of the path of the train doors.

The shooting trend in the Big Apple culminated on Saturday, when CD peddler Farrakhan Muhammad, 31, allegedly shot three innocent bystanders — including a 4-year-old girl — in Times Square while aiming for his brother. He was busted Wednesday morning in Florida.

Later that same night, a man was stabbed to death inside the Midtown Suite hotel on West 31st Street.

Boy, 16, blinded after he is shot in the face in Maduro’s Venezuela