London: Sparkling wine, confetti, a midnight countdown: It’s not New Year’s Eve, but it might as well be for England’s clubbers. After 17 months of empty dance floors, the country’s nightclubs are reopening with a bang.

Beginning on Monday, face masks will no longer be legally required, and with social distancing rules shelved, there will be no more limits on people attending theatre performances or big events. 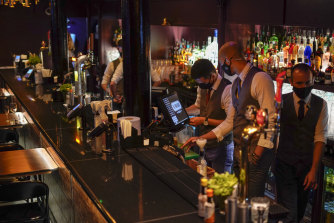 Bar staff prepare to reopen The Piano Works club in Farringdon, London as part of the relaxation of COVID-19 restrictions. Credit:AP

From London to Liverpool, thousands of young people plan to dance the night away at “Freedom Day” parties after midnight Sunday, when almost all coronavirus restrictions in England are to be scrapped. Nightclubs, which have been shuttered since March 2020, can finally reopen.

London nightclub The Piano Works plans to kick off its “Freedom Day” bash on Sunday with a countdown to midnight, when staff members plan to cut a ribbon to the dance floor and serve customers free prosecco.

“I think it is going to be the most magical moment, when you’ve got people who haven’t been able to dance and sing and just be normal, all rush onto the floor at midnight and get back to what we love,” said Daisy Robb, the club’s head of sales.

But while entertainment businesses and ravers are jubilant, many others are deeply worried about the British government’s decision to scrap restrictions at a time when COVID-19 cases are on a rapid upswing.

Britain has the seventh highest death toll in the world, 128,708, and is forecast to soon have more new infections each day than it did at the height of a second wave of the virus earlier this year. More than 54,000 new cases were confirmed on Saturday (British time), the highest daily number since January, although reported virus deaths have stayed comparatively low so far. On Sunday there were 48,161 new cases.

Officials have repeatedly expressed confidence that the UK’s country’s vaccine rollout – 68.3 per cent of adults, or just over half of the total population, has received two doses – will keep the threat to public health at bay. Daily deaths, currently at around 40 per day, are just a fraction of a peak of above 1800 seen in January.

But leading international scientists on Friday described England’s “Freedom Day” as a threat to the whole world, and 1200 scientists backed a letter to British medical journal The Lancet that criticised the Conservative government’s decision.

“I can’t think of any realistic good scenario to come out of this strategy, I’m afraid,” said Julian Tang, a clinical virologist at the University of Leicester. “I think it’s really a degree of how bad it’s going to be.”

Even Prime Minister Boris Johnson’s chief medical officer, Chris Whitty, warned that “we could get into trouble again surprisingly fast.” Johnson himself played down talk of freedom and stressed that life wouldn’t instantly revert to how it was pre-pandemic.

“If we don’t do it now we’ve got to ask ourselves, when will we ever do it?” he said in a video message filmed on Sunday.

“This is the right moment but we’ve got to do it cautiously. We’ve got to remember that this virus is sadly still out there.”

Monday definitely won’t be business as usual for Johnson. The Prime Minister and Chancellor Rishi Sunak are both self-isolating for 10 days after contact with Health Secretary Sajid Javid, who tested positive for COVID-19 on Saturday despite being fully vaccinated.

They are among hundreds of thousands of Britons who have been told to quarantine because they have been near someone who tested positive. The situation is causing staff shortages in restaurants, car manufacturers and public transport.

One worry, Tang said, is of “super variants” that could surface after people are allowed to mix without precautions over the summer. Add a flu resurgence in the colder months and that spells “a winter of very serious proportions,” he said.

Nightclubs in particular are potent spreading grounds, Tang said, because their core customer base — people 18 to 25 — only became eligible for a first vaccine dose last month and haven’t yet been offered the second shots needed to boost immunity.

“That population is not fully vaccinated. They’re not masking. They’re in very close contact, heavily breathing, shouting very loudly to the music, dancing with different people,” he said. “That’s the perfect mixing vessel for the virus to spread and to even generate new variants.”

Johnson has highlighted the risk of new variants and urged citizens to complete the vaccine programme.

The Prime Minister urged the public on Sunday to exercise “prudence and respect for other people and the risks that the disease continues to present.” He wants nightclubs and other crowded venues to use COVID-19 status certification “as a matter of social responsibility,” and only to admit patrons who can show they are double-jabbed, have a negative test result or have recovered from the disease.

There is no legal requirement for them to do so, however. In a flash poll of 250 late night bars and clubs by the Night Time Industries Association last week, 83 per cent said they won’t be asking people about their COVID-19 status, according to Michael Kill, the trade body’s chief executive. Many owners see the passes as a huge turn-off for customers and accuse the government of “passing the buck” to businesses.

“We’ve heard people will boycott businesses that adopt this,” Kill said. “The last thing we want after months of closure is to be again hindered in terms of capacity to trade. Either mandate it or don’t mandate it. This is putting an inordinate amount of pressure on us.”

Johnson’s decision to scrap the legal requirement for face masks in indoor public spaces has also sowed confusion. Days after the prime minister said masks would still be “expected and recommended” in crowded indoor places but not compulsory, London mayor Sadiq Khan announced that passengers on the capital’s Tube and buses must continue to wear them.

Some retailers, like the bookstore chain Waterstones, said they would encourage customers to keep their masks on. But many believe implementing such policies will be tricky without the backing of the law.

The end of restrictions in England on Monday will be a critical moment in Britain’s handling of the pandemic, which has killed more than 128,000 people nationwide, the highest death toll in Europe after Russia. Other parts of the UK — Scotland, Wales and Northern Ireland — are taking slightly more cautious steps out of lockdown.

Salsa instructor Esther Alvero is one of the many who say they’re excited but fearful. A co-founder of Cubaneando, a company that ran salsa club nights, classes and performances for gala events before the pandemic, Alvero says she has had next to no income in the past year. Her savings are gone and her dancers have had to survive by taking part-time jobs as cleaners or Amazon delivery drivers.

“I’m scared but we have to survive,” she added. “We have no option because the economic consequences could be worse than COVID itself.” 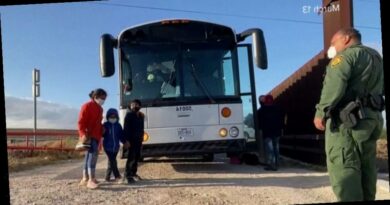