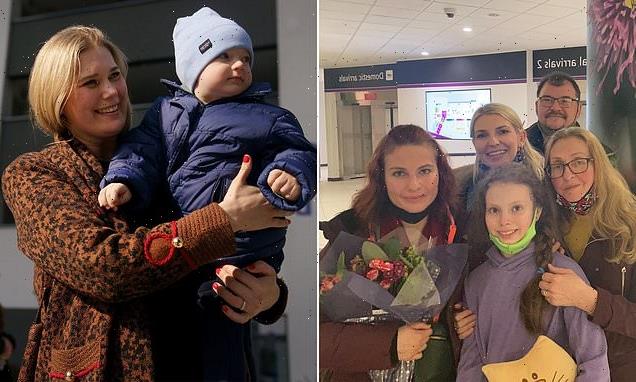 ‘I am grateful to be here with my mummy, my grandparents and my aunt. I feel safe’: The happy face of Ukrainian girl, 10, as her family bring her across Europe to Britain

A girl of ten told yesterday how she finally feels safe after journeying across Europe with her mother to Britain.

Sofiia Slokvenko and 39-year-old Oksana fled from their home town of Cherkasy near Kyiv.

They are among the first refugees to benefit from the Government’s fast-track scheme for relatives of Ukrainians who have settled status in Britain.

They were settling in at their new home in Dalgety Bay in Fife after an emotional reunion with grandparents Larysa and Oleksiy Mishchenko.

But Sofiia’s father, Oleg, remained behind to fight after dropping his family at Ukraine’s border with Poland.

Mrs Slokvenko and her daughter spent more than a week on their journey to Warsaw and then Krakow before finally touching down in Edinburgh on Monday night. 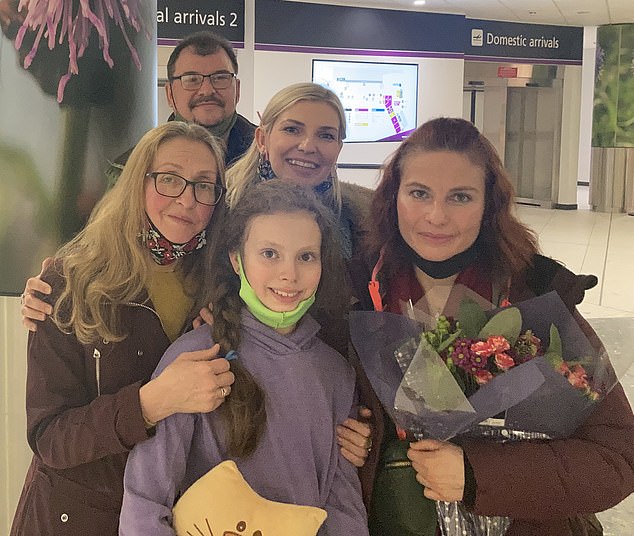 Sofiia Slokvenko (pictured front and centre), 10, and her 39-year-old mother Oksana (pictured far right) fled from their home town of Cherkasy near Kyiv 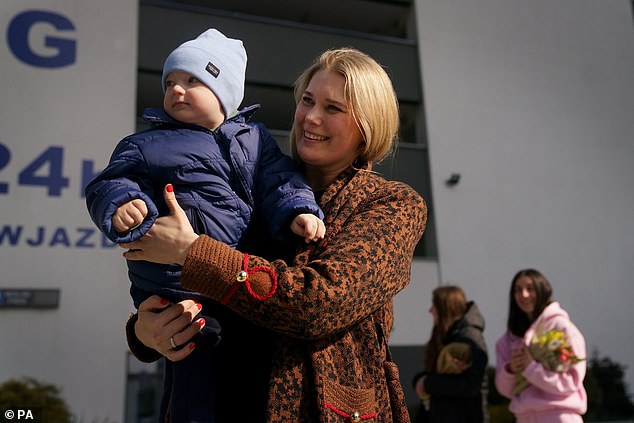 Tatiana Zavyalova from London, holds her one-year-old son Misha Kucherka, who was staying with family relatives in Ukraine, as she is reunited with him in Rzeszow, Poland

Their journey included a 12-hour walk over the border at Krakovets where scores of women, children and the elderly waited in freezing temperatures to cross.

Accompanying mother and daughter was Mrs Slokvenko’s sister, Alice, who had travelled from her home in London to help them secure visas by using her and her parents’ permanent residency status.

Last night Sofiia said: ‘I am grateful to be here with my mummy, my grandparents and my aunt. I feel safe.’

Mrs Slokvenko said: ‘It’s very hard to see what is happening in our country. It’s something like a nightmare, it feels like you will open your eyes and it will be OK. But, it’s not.’

Meanwhile, a London-based couple broke down in tears when they were reunited with their one-year-old son Misha in Poland after he was evacuated from Ukraine with his extended family.

Tatiana Zavyalova, 39, and Vasyl Kucherka, 24, said they were ‘super emotional’ after meeting their family at a visa centre in Rzeszow.

Misha had been staying with his paternal family in Ukraine when war broke out and the couple, who live in north-west London, were unable to collect him.

Miss Zavyalova said: ‘Finally, we’re all here. It was super emotional. Next step is getting the visas sorted and going back to the UK.’

Unicity businesses frustrated after string of smash-and-grab robberies: ‘We can’t afford this’

New protests break out in Belarus as opposition squabbles