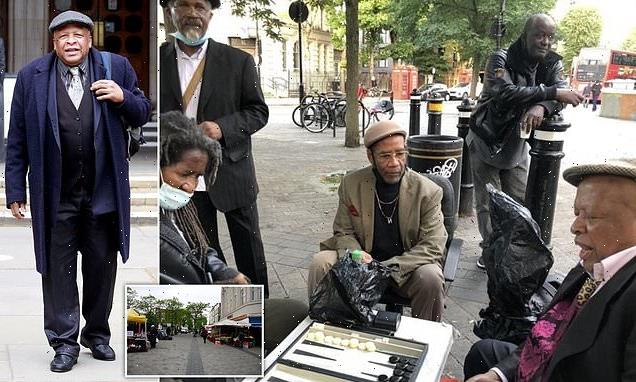 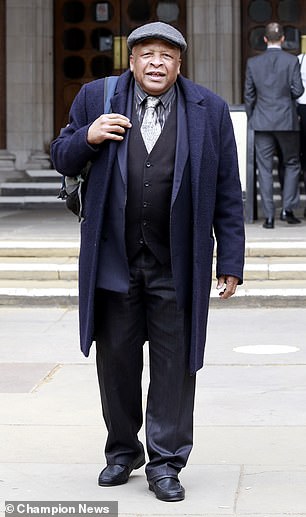 Ernest Theophile (pictured), 74, took Westminster Council to court after it banned him and his friends from playing dominoes ‘loudly’ in a public square. He now hopes to have the injunction thrown out after a judge ruled the council failed to take into account his racial equality rights.

A black pensioner who was banned from playing dominoes ‘loudly’ with his friends in a public square has won a legal fight against the local council.

Ernest Theophile, 74, and a group of elderly friends have been gathering at Maida Hill Market Square in north London for the past 12 years, where they ‘chat, socialise and play dominoes, cards and backgammon’.

But Westminster Council tried to drive Mr Theophile and others out early last year by securing an injunction banning social gatherings there, after it said it received ‘more than 200 complaints’ about the noise being made.

In March last year a judge tweaked the order – allowing Mr Theophile and his friends back into the square but under the threat of being jailed if they are caught ‘playing loud amplified music, drinking alcohol and shouting and swearing’.

Mr Theophile, whose family arrived from the Dominica Republic as part of the Windrush Generation in the 1950s, took the matter to the Central London County Court, claiming the injunction was ‘racist’ because it discriminated against his Caribbean culture.

Anne McMurdie, solicitor for Mr Theophile, had said the order was like asking people to play football ‘but you can’t shout or swear or get cross.’

Judge Baucher ruled against Westminster Council on Friday, holding that it failed to take full account of its ‘public sector equality duty’ by not considering Mr Theophile’s racial equality rights.

The council had argued it was not required to consider equality issues when seeking an injunction – which was rejected by the judge.

Mr Theophile’s legal team will now try to get his case back into court next month in a bid to have the council’s injunction thrown out.

Mr Theophile has ‘visited the area most of his life’, Judge Heather Baucher told court, and sees the square almost like a second home.

Westminster Council obtained an injunction banning amongst other things ‘shouting’ and ‘drinking alcohol’ in the square which the group says discriminates against Caribbean culture around the playing of dominoes.

‘If you are West Indian you just can’t play dominoes without making a bit of noise,’ explained Mr Theophile.

Judge Baucher today handed him victory, ruling that the council did not take its duty to consider the racial equality rights of Mr Theophile and his friends into account when seeking the injunction.

‘He is Afro-Caribbean,’ said the judge, adding: ‘He says that access to the square is part of his community ties, where backgammon and dominoes are played, and where informal support is given for those experiencing social isolation and issues with their mental health.’

The square became a refuge for the group during the worst of Covid when he and other ‘lonely’ retirees gathered to socialise, play games and console each other. 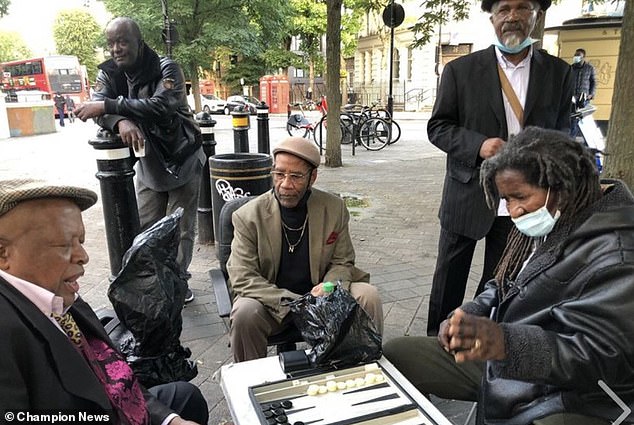 Mr Theophile (far left) and his friends have been gathering at Maida Hill Market Square in north London for the past 12 years, where they ‘chat, socialise and play dominoes, cards and backgammon’

Westminster Council initially pushed to drive Mr Theophile and others out early last year by securing an injunction banning social gatherings there.

But in March last year a judge tweaked that order – allowing Mr Theophile and his pals back into the square but under the threat of being jailed if they are caught ‘playing loud amplified music, drinking alcohol and shouting and swearing’.

A Westminster Council spokesperson previously disclosed it had received over 200 complaints from local residents over anti-social behaviour, with at least one resident claiming they were forced to move home due to the racket in the square.

Council officers claim ‘anti-social’ elements have been gathering in the square and causing mayhem by ‘playing music, drinking alcohol, shouting, swearing, obstructing the highway and by urinating..’

‘The council says that such behaviour has caused alarm, harassment, distress, nuisance, the risk of damage to property and negatively impacted on businesses in the area,’ explained the judge.

But Mr Theophile says he feels insulted to be associated with such allegations, insisting he is a ‘dignified’ retired gentleman who just likes to pass the time of day with his friends.

He and his lawyers say the order sought by the council is ‘crazy’ and claim it amounts to racial ‘discrimination’.

The neighbours’ complaints have partly focused on the clatter and roar involved in playing dominoes, which is traditionally a source of passionate frustration and joy in Caribbean culture.

The court order, which carries the threat of a prison stretch if Mr Theophile is ever found in breach ‘is likely to be indirectly discriminatory,’ Mr Theophile’s barrister Tim James-Matthews told Central London County Court.

‘Although apparently ‘neutral’ in application, the majority of those whose behaviour is constrained by force of the injunction*.share a protected characteristic: race,’ he added.

Given that effect, he argued that council officers should have carefully considered whether they were ‘advancing equality’ under their public law duties before calling for the drastic ban.

‘An injunction restraining the activities of a minority of black people in a public square where there is a theoretical power of arrest and sanction of imprisonment is indirectly discriminatory,’ he told Judge Heather Baucher.

And after extensive legal argument from both sides Judge Baucher ruled against Westminster Council, holding that it failed to take full account of its ‘public sector equality duty’ before going to court.

‘Mr Theophile says that the proposed injunction is likely to be indirectly discriminatory because the majority of those whose behaviour is constrained share the protected characteristic of race and that the claimant’s public sector equality duty under the Equality Act 2010 was thereby engaged,’ she explained. 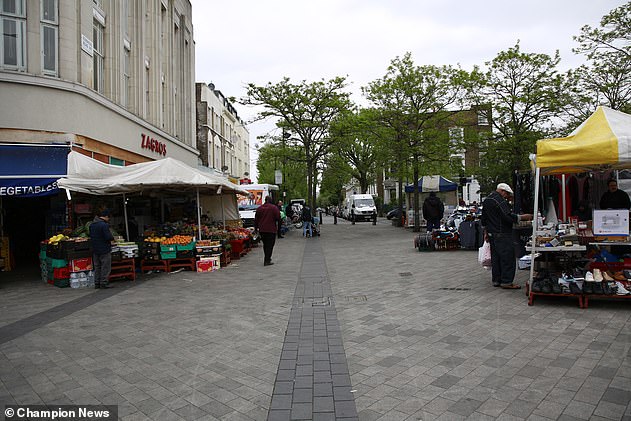 ‘In making an application for an injunction…the claimant was required to have regard to the public sector equality duty,’ she added.

‘It follows the preliminary issue is therefore determined in the defendant’s favour.’

Mr Theophile’s legal team will now try to get his case back into court next month in a bid to have the council’s injunction kicked into touch in light of Judge Baucher’s ruling today.

Explaining earlier how the square became a refuge during Covid, the pensioner said outside court: ‘We all ended up gathering there because we were kind of lonely.

‘There’s nowhere else provided for us, all we wanted was somewhere we could go and sit down and play some dominoes.’

Earlier Anne McMurdie, solicitor for Mr Theophile, said that while at the moment he can go to the square, the order has a ‘dampening effect’ on his freedom.

‘He is permitted to go to the square to play dominoes if he wants to, but he would have to do it very quietly and in a way that’s completely contrary to how he’s used to playing the game,’ she said.

‘It’s like saying you can play football but you can’t shout or swear or get cross.

‘It’s really curtailing how they have always socialised together, that’s the nub of it. So they can play dominoes so long as they don’t do it in the traditional way, and they can’t have a beer with it either.

‘Bear in mind that there’s also a power of arrest and a risk of imprisonment involved – the idea that you could be arrested for shouting at a friend because you thought they cheated is crazy.’

‘There’s nowhere else provided for us, all we wanted was somewhere we could go and sit down and play some dominoes.’

And he said after today’s hearing: ‘although the area has changed a great deal since I was young, it is a huge part of my life. It’s part of my culture to spend time playing dominoes and backgammon with other West Indian men my age in the community where I grew up.

‘Lots of people who I know at the square have mental health difficulties and are socially isolated, but they know that when they come to the square, they can relax by sitting on the benches and chatting to other people. It keeps us healthy.’

Reverend Henry Everett, the vicar of St Peter’s Church, just a few minutes’ walk from Maida Hill Square, has known the local community for 15 years and commented on the case: ‘The borough of Westminster has some of the most deprived areas in London.

‘Around the Harrow Road, I have found there to be an astonishing level of need in the community in terms of mental health support, so I was shocked when I first heard about the injunction, and I expressed serious concerns about the use of this dangerous, catch- all measure against the whole community.’