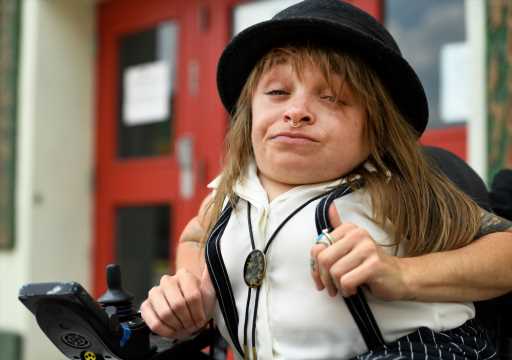 It seems so obvious in retrospect, the pairing of a talented Denver-based rapper with an ace local theater company on an original production. But then, that’s how the best no-brainers often work. They require nimble minds to imagine and tenacity to bring into being.

Shortly after Denver’s 2019 mayoral election, Regan Linton, then-artistic director of the Phamaly Theatre Company, called Kalyn Heffernan, the frontperson for the hip-hop group Wheelchair Sports Camp, about writing the music for a home-brewed production of “Alice in Wonderland.”

Each summer for more than three decades — the awful 2020 excepted — the groundbreaking theater company, which was founded by people with disabilities, has mounted a mainstage musical. “Alice” will be its first commissioned work. David Jacobi wrote the play, with Heffernan and her Wheelchair Sports Camp mates and ally Michelle Rocqet signing on to create the music.

The fruit of that collaboration has its world premiere on Saturday at the Su Teatro Cultural and Performing Arts Center on Santa Fe and will run through Sept. 5. (After its in-person run, “Alice” streams at phamaly.org Sept 6-30, with an outdoor concert on Sept. 30.)

“I knew I wanted music but didn’t want a full-blown musical,” Linton shared in an email a few weeks before rehearsals began. Instead, she aimed for a show that afforded those company players who typically appeared in its non-musical offerings a shot at performing in the more high-visibility mainstage production. “I leaned into the idea of a musical soundscape with a few choice songs.”

When Linton interviewed Heffernan for New Mobility Magazine, the big-little activist had been on the ballot for mayor in 2019 — running the city’s first “queer, disabled artist campaign.” Heffernan was born with osteogenesis imperfecta, often referred to as “brittle bone disease” and gets around in an electric wheelchair. Linton arm-powers her wheelchair; she became a T4 para after a car accident. After she and Heffernan spoke, Linton “realized they were the exact fit for the unique mix of styles and energies we wanted to incorporate into Alice’s world.”

Heffernan recalled that meeting over a plate of huevos rancheros at Noa Noa, a restaurant across from Su Teatro where “Alice” was in the midst of its first costumed run-through. “I was like, ‘Oh,  (expletive),’ ” when Linton approached her about “Alice,” Heffernan said. The Wheelchair Sports Camp’s MC isn’t afraid to reach for the salty language.

Sitting nearby was Michelle Rocqet, the show’s musical director. Heffernan was barely out of the meeting with Linton when she called the fellow Denver music scene luminary. She’s the beatboxer and vocalist for the Milk Blossoms. The two met at Girls Rock years ago and now work together at the maverick not-for-profit organization Youth on Record. Rocqet did musical theater growing up in Durango and provides many of the vocals on the dynamic soundscape. “She’s freestyled musicals on my patio,” enthused Heffernan. It made perfect sense.

“Ironically enough, I don’t even like musicals,” Heffernan added, punctuating the point with her trademark, knowing cackle. It’s a laugh that finds excellent employment in “Alice.” Heffernan plays one part of the Cheshire Cat trio (Head, Body and Tail) who usher Alice down the rabbit hole and into the wild, chaotic, illuminating realm of the play’s title.

In fact, Heffernan had only seen two Phamaly shows when Linton approached her. The first was “Into the Woods.” And, like so many people new to the work of the theater company, the experience provided something of an epiphany in terms of the company’s ambition. “I’m a cynical rapper, and when I see disability things, I kind of was expecting something more mediocre,” she said.

It’s a waning misconception about a company that is one the nation’s most singular in terms of its vision of work for artists with disabilities. But there was something more deeply rattling in the experience.

“I cried a bunch at the end,” Heffernan said. “I have never seen that many disabled people cast with integrity.”

Heffernan and Rocqet agree that in “Alice,” something befitting the year in which the show was honed took shape. They had been working diligently to hit the deadline for a summer 2019 premiere when the brakes were slammed on by the virus and then the quarantine. The studio had been booked; a first read-through had been planned for late May 2019.

“We had to do everything remote, which actually lent itself to a much bigger sound and project,” Heffernan said. “We were able to collaborate with more of our music friends than I think we would have been able to.”

Had they gone into the studio, which was the original plan, things might have come out differently, more intentionally controlled, added Rocqet. “It probably would have been much more us directing and shaping the musicians.  Working remotely and letting go of that control, we got back all of these new ideas of the different instruments and a whole orchestra.”

The ironic twist that COVID-19 created isn’t lost on either of them. “The nonsense made sense in that time,” Rocqet said. “One thing I learned: Nonsense can be so meaningful.”

“The purpose (of the work) was like Wonderland, going down a rabbit hole,” Heffernan echoes.  “I really don’t think it would have turned out as good if we weren’t actually down the rabbit hole and actually isolated in this mania.”

And it is good.

The “Alice in Wonderland” soundscape (the LP is available on bandcamp.com) is a wonder of experimental instrumentation — electronic and live — and powerful-and-then-poignant vocals. The work evokes the vertiginous qualities of Lewis Carroll’s adventure with foreboding and smarts but also with joy. The final number, “Tea Party Reprise,” has the feel of a dance gathering, the swish of lights cast from a disco ball. And fans of the fierce MC of Wheelchair Sports Camp will get their rhymes, too.

In January, Linton announced her departure as Phamaly’s artistic director. But the boldness required in creating a show like “Alice” is sure to carry on with new leader, Ben Raanan, who has said he likes his disability theater “badass.”

Heffernan’s work marks yet another pivotal moment for a theater company that has been creating them at an increasingly vigorous clip. But working with Phamaly also has transformed Heffernan.

“I romanticize the idea of interdependence a lot,” Hefferan said. It was a big part of that mayoral campaign. The notion of interdependence also informs the installation she designed for Meow Wolf (opening Sept. 17). But it’s gained fresh meaning during the work with Phamaly.

“The amount of vulnerability and interdependence during the first rehearsals, when we all were back in person and going around the entire cast and just talking about our disabilities and our access needs, (expletive) me up in so many good ways that I have been searching for in my life,” she said. It exploded her thought about leadership by expanding her understanding of interdependence.

“Interdependence is just like relying on each other for our different skill sets and then picking up after each other for the things that we need more or less help with,” Heffernan said. “Phamaly is such a great example of how well that can be accomplished. And not in a pitiful way, not in this charitable ‘look at what we’re doing’ way.

“It’s like, no, we just want to make the best art that we can,” she paused, smiling knowingly.  “To me, that’s just like the sexiest thing that could ever happen.”

Hairdressers could reopen this month with staff