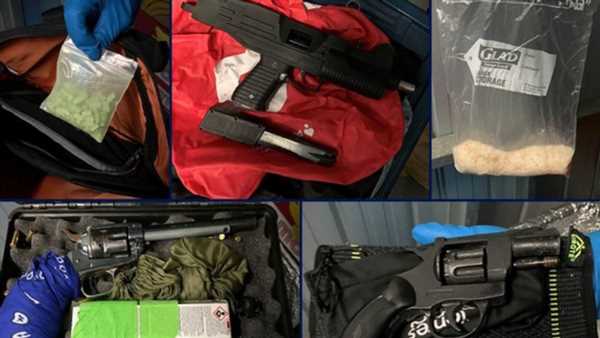 More than $5 million in assets and cash have been restrained this week as part of police Operations Seltos, Van and Equinox following searches of various sites including the Waikato Comancheros bikie gang headquarters.

The operations are linked to global law enforcement sting Operation Trojan Shield, which tricked organised criminal networks into using encrypted communication devices that were monitored by the FBI.

The 27-year-old appeared in the Manukau District Court today. Further charges in relation to the seized property are likely, police said.

The firearms were found along with about half a kilogram of methamphetamine and yet to be identified tablets.

These items were located alongside a Head Hunter motorcycle gang patch and gang clothing.

Since June 7, when Operation Spyglass termination took place, police have executed dozens of search warrants resulting in the arrest of 36 people charged with a wide range of serious drug, firearms and money laundering offences.

Four motorcycles were also restrained from the Waikato Comancheros headquarters.

As of today, more than $5m in assets and cash has been restrained by police through the raids.

This figure is updated from the initial $3.7 million calculated on Tuesday.

“Police will continue to target organised criminal groups and those who are in possession of unlawful firearms.We want to ensure our communities are resilient and feel safe,” Superintendent Williams said.

“As the operation is ongoing, police are not ruling out further arrests, restraints or charges. Every gun like these that police take out of the hands of gangs, makes our communities safer.”