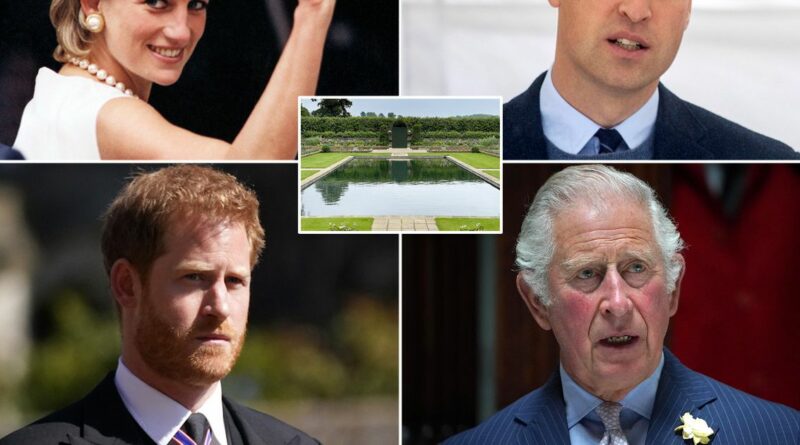 Just a few select family members have been invited to the Princess Diana statue unveiling.

The intimate ceremony will take place on Thursday on what would have been Diana's 60th birthday.

A royal source told The Mirror: "This is a small event and a very personal moment for the family.

"Plans have been scaled back due to the current COVID-19 restrictions and media arrangements reflect both the size and tone of the event."

The pared-back ceremony will take place in the Sunken Garden at Kensington Palace – one of Diana's favourite spots to spend time with her sons when she was alive.

The statue was commissioned in August 2020 by Prince Harry and Prince William to mark the 20th anniversary of Diana's death and recognise her positive impact in the UK and around the world.

Who will be invited?

Up until last week, Prince William and Prince Harry had planned on inviting 100 of Diana's friends, family and ex-staff members, Richard Kay revealed to the Mail Online. The event has now been stripped-back so only a select few can attend.

Prince Harry touched down in the UK last week and will be reunited with his brother Prince William for the ceremony, despite strained relations in recent months.

Assuming he does the 'test to release' scheme, he will have had to isolate for five days. If not, he will need to stay home for ten days under UK government rules, as the United States is on the amber list.

It will be the first time the two brothers have spent time together since the Duke of Edinburgh's funeral at St George's Chapel in Windsor in April.

Conflicts have developed between the two warring siblings after Prince Harry stepped back from front-line Royal duties and moved to North America with wife Meghan Markle.

Although both brothers will be in attendance, Kate and Meghan will be absent from the statue unveiling, despite earlier plans for Kate to join the pair. The trio were expected to walk in together, presenting a united front in light of the recent family rift.

Meghan did not come with her husband for the trip across the pond and remains in California with their two young children, Archie and Lilibet.

It is believed that Prince Charles will not be joining the ceremony either, with a source claiming that it "[has] the potential to resurface old wounds, and it brings back memories for him: happy, sad, regretful."

The sculptor who created the piece, Ian Rank-Broadley and garden designer, Pip Morrison are both invited.

Revolutionary Guards: Iran's enemies will be destroyed if they cross our red lines