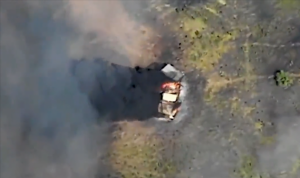 Video footage has been circulating on the internet of Ukrainian servicemen destroying three Russian missile launchers. The Ukrainian special operation forces recorded the footage of the National Guard of Ukraine striking Russian artillery. The war in Ukraine has been raging for over three months, and peace talks have been put on hold, as the Russian bombardment continues.

The video shows the three Russian missile launchers covered in thick grey clouds of smoke as they become engulfed in flames.

After the missile carriers are hit, all three erupt into thick large clouds of grey smoke.

One of the missile carriers erupts into bright orange flames and shoots out a missile after being damaged and destroyed.

All three carries continued to spit flames as the smoke continues to rise.

Users on social media have been reacting to the footage online.

One Twitter user @Therealseacat said: “Excellent, their artillery should be the prime target.”

@Malmo190 said: “Books will be written in years to come about the bravery of Ukrainian special forces operating behind orc lines, hopefully, @johnsweeneyroar can get 1st hand accounts from these brave soldiers to document their achievements many will never know about.”

@Raymond007xyz said: “one last rocket and then …grave rest.”

@KaniMiy_ said: “The Russian army of servants of the devil must disappear on the ground.”

@Xandaman01 said: “I want to fight for Ukraine, in the international legion for the defence of the territory of Ukraine but we don’t have a Ukraine embassy here in Uganda, where do I go?”

@GeorgeKoller4 said: “Damn nicely done IMHO! “Welcome to Ukraine!” seems the perfect “saying” – there are a few Russians/Syrians and friends getting a bad tour with most abrupt ending. Not funny, but not sad given the terrible choices!”

Ukrainian troops have only just been recently trained in using Howitzer weapons which were used to destroy the Russian missile carriers.

A US official confirmed last month: “We do believe that these howitzers will be […] very, very effective in helping in the Donbas fight, which we’ve already seen, is deeply reliant on long-range fires, specifically artillery by both sides.

They added: “We certainly believe that the conditions could be set for a much longer slog here inside the Donbas given both sides’ familiarity with the terrain.

“We’ve described it as a potential knife fight, and I think it’s beginning to shape up to be exactly that.”