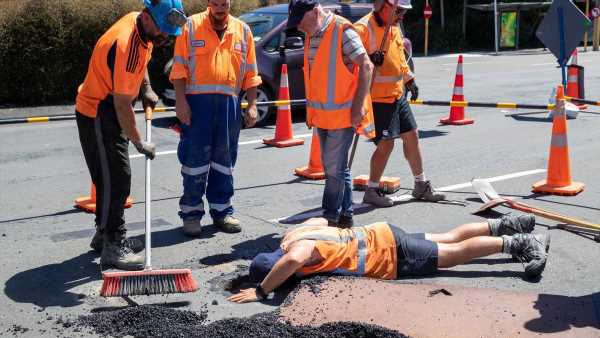 All six lanes of Wellington’s Jervois Quay will be closed over Queen’s Birthday weekend in a mammoth effort to replace a broken 100-year-old stormwater pipe.

In February a sinkhole opened up in the road after the pipe collapsed, risking the safety of drivers and increasing the risk of flooding in the CBD.

Crews initially installed a temporary fix and backfilled the sinkhole allowing for Jervois Quay to be reopened while a permanent solution was investigated.

Over the following months work was undertaken to try and repair the pipe without the need to dig a trench the full length of the road to replace it.

The pipe will now have to be fully replaced.

To do this, all six lanes will be closed for a four-day period over Queen’s Birthday weekend to allow Wellington Water crews to embark on a 24/7 operation to replace the pipe.

“This will allow construction work, that would normally take six weeks, to be completed in four days and five nights”, Williams said.

It’s expected work will start at 7pm on Thursday June 3 and the road will reopen before 6am on Tuesday June 8.

Wellington Water network development and delivery manager Tonia Haskell said in a statement they were taking advantage of the road being quieter over the long weekend.

“The project is an ambitious task and requires a full road closure so multiple contractors can work in shifts around the clock to complete the pipe replacement safely and quickly.

“This will be a significant project and there will be disruption. We are working to minimise the impact on people but are asking the public to avoid using this route and look at alternative travel options – like public transport, cycling, walking.”

“It was leaking like a sieve”, he told the Herald.

Rush applauded Wellington Water for coming up with a short, sharp, and efficient solution to the problem.

“We recognise the road closure will be difficult, but I’m confident the team at Wellington City Council will ensure disruption is minimised and it’s absolutely amazing that we will be able to get six weeks of work done in four days.”

Rush said he was concerned other pipes under the CBD were of the same “vintage material”.

He said he has asked for these to be checked as a priority and Wellington Water was responding to that.