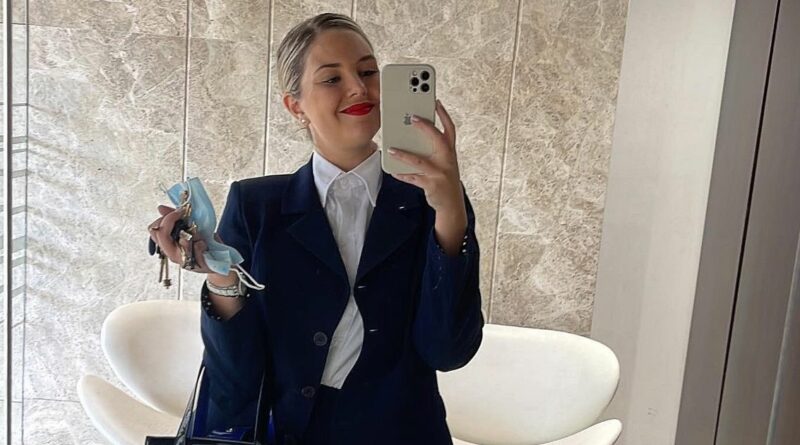 A stunning blonde flight attendant has claimed she was rejected by one of the world's most recognised airlines for being too fat.

The astonished airline hostess wrote: "Never thought I was going to do this but today I am extremely puzzled. As many of you know, I finished my cabin crew course and what I want most is to fly."

Josefina then wrote of her experience with an Emirates Airline interview she had attended, with the hopeful airline hostess snubbed and told to "lose weight".

Walking readers through the interview process, she wrote: "In the first instance, they put us in pairs. You had to talk to your partner and then I had to introduce her to everyone and she would introduce me with the information we gave each other.

"She had very usual mistakes and I helped her so that when it was her turn she wouldn't make them, or avoid them.

"(By this I mean that her level of English was a little lower than mine.) Everything is in English, but luckily that was not a problem for me."

The partner she had worked with in the interview had passed, she says, but Josefina was dropped into the unsuccessful applicants room.

She wrote: "They take everyone out of the room and then the recruiter says that the numbers she mentioned are going to enter the room, including mine.

"The recruiter said that she wanted two people to please stay in the room because she was going to tell them something and she didn't name me among them.

"I approach her and ask 'what can I do to improve in the next search?' to which she answers 'honestly, you need to lose weight'. After that, the compliments came out from her mouth."

An Emirates spokesperson said in response to the "weight police" claims: "As a global airline, we treat the wellbeing of our employees with the highest priority, and we believe being fit and healthy, both physically and mentally, is a critical aspect in them carrying out their duties safely and effectively.

"It may not always be apparent to our customers, but the responsibilities of our cabin crew are vast, and their ability to influence and achieve safe outcomes when needed, requires extensive training and a minimum standard of physical fitness."

"We're proud of our colleagues who form Emirates' cabin crew: who provide unwavering, exceptional service and who help maintain the safety and quality of operations and service Emirates is known for. We do not comment on internal policies or procedures or specific, confidential cases of existing or past employees."

The Daily Star has contacted Emirates Airlines for comment.

St Patrick's Day 2020 is marked by Google Doodle today- but what does the artwork mean?

Turkey to send troops to Libya at Tripoli's request – Erdogan