Home » World News » The best photographs of the Royal Navy, RAF and Army of 2021 revealed 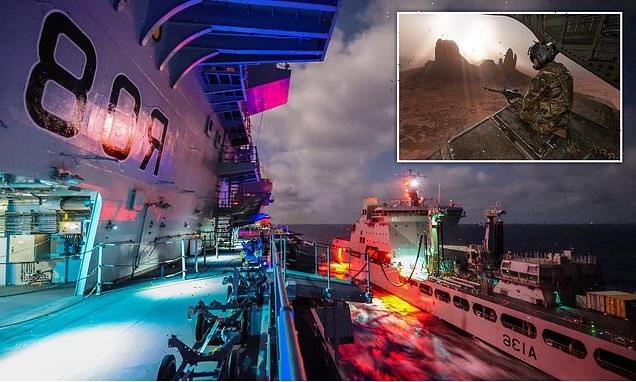 Filling up Big Lizzie, Paras packing a punch and a tearful reunion: Armed forces name their favourite pictures of 2021

Soldiers, sailors and aircrew serving home and abroad have released a stunning gallery of photographs taken on missions across the globe.

According to the Ministry of Defence, the images provide  a unique look back at the work of the UK Armed Forces around the world in 2021.’

A spokesman said: ‘The stunning images show the impressive scale and ambition of the UK Armed Forces on deployment around the world, from cold weather training in the Arctic Circle to counter-terrorism operations over the mountains of Mali. From the dust and dirt of a war zone to the gleaming uniforms of a parade, military photographers capture the images that show the reality of life for UK servicemen and women.

‘Those who capture these images are all soldiers, sailors and aviators first and photographers second, deploying with their rifle as well as their camera.’ 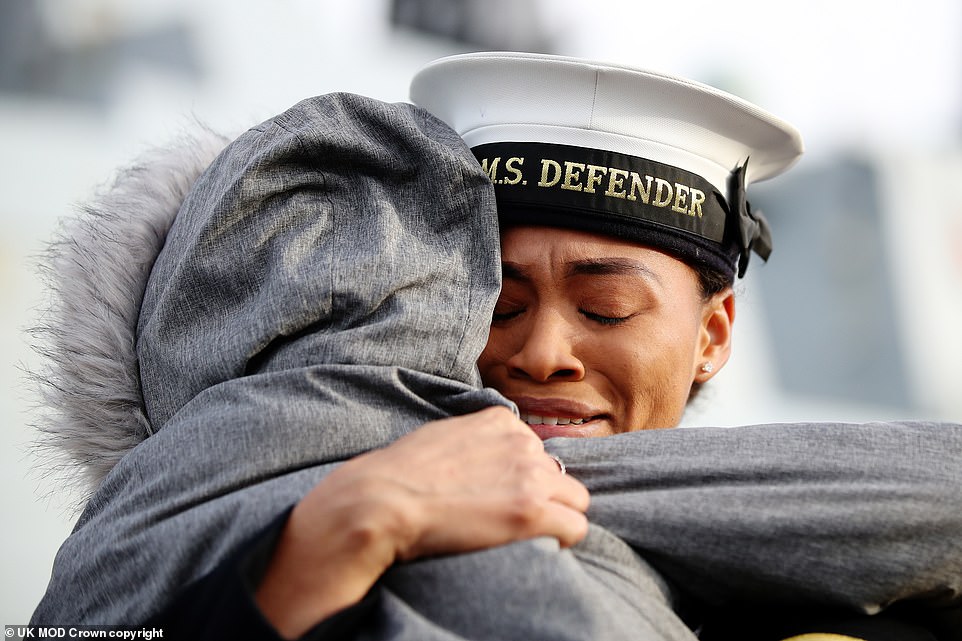 This sailor, pictured, was greeted by her family having come back from a high profile patrol on board HMS Defender in the Black Sea in June. Defender escorted HMS Queen Elizabeth on her maiden deployment to the Pacific Rim and back 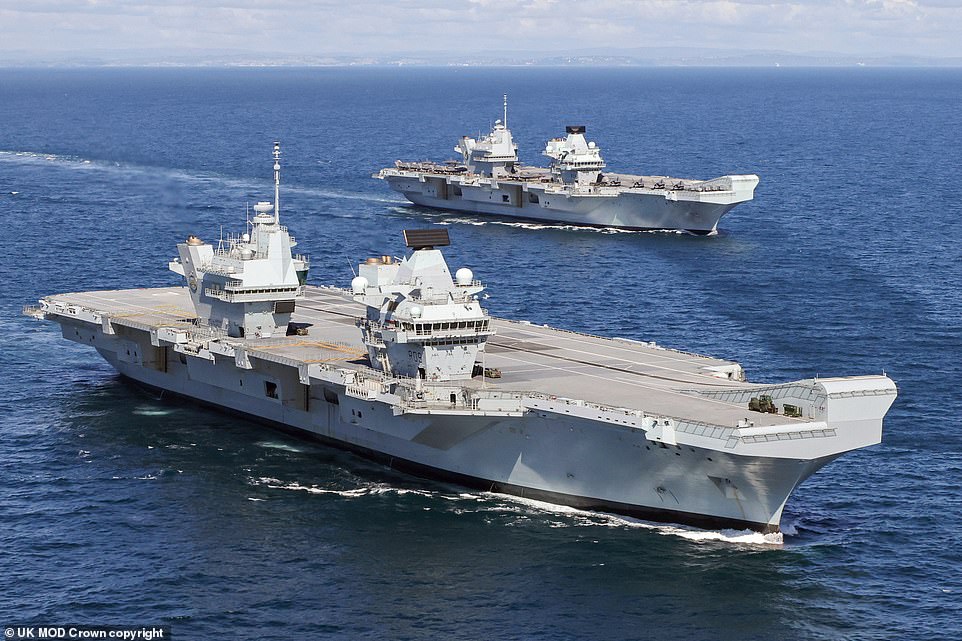 Big Lizzie, back met her sister ship HMS Prince of Wales, front, for the first time in May 2021. The 65,000 tonne carriers met at sea for the first time in operational service. In future, one vessel will be available for deployment at all times, ready to respond to global events at short notice 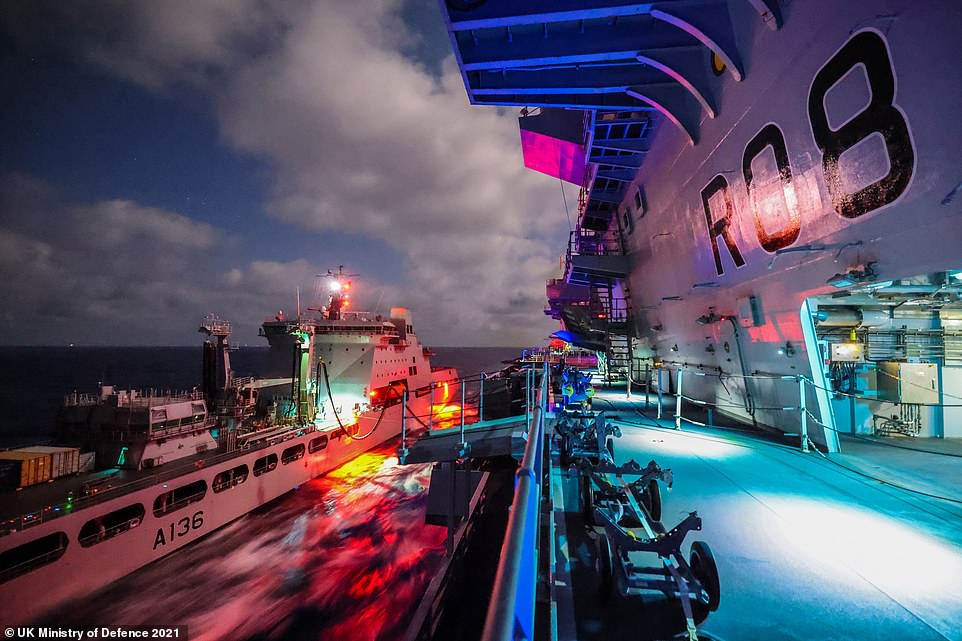 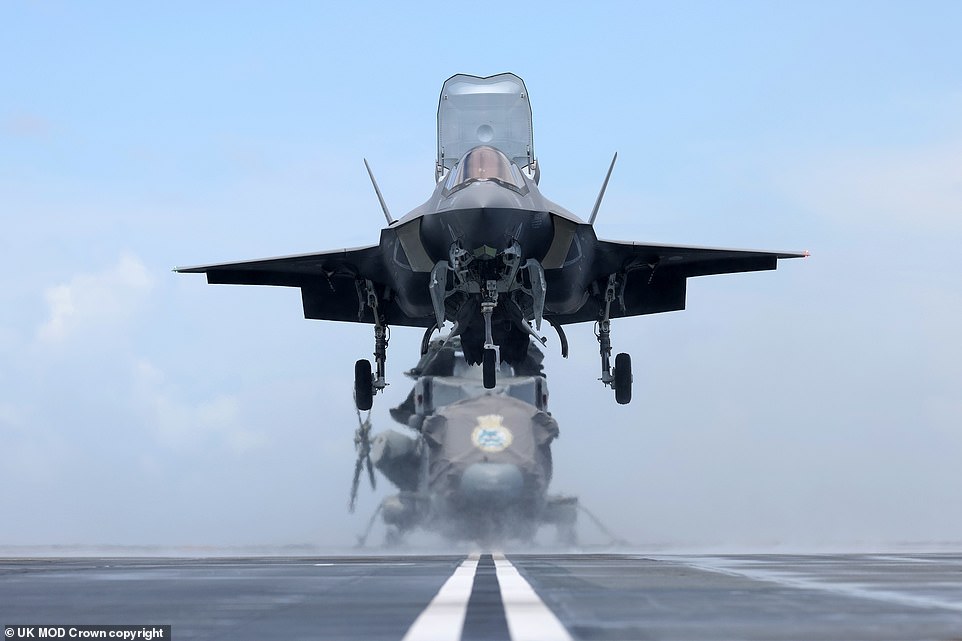 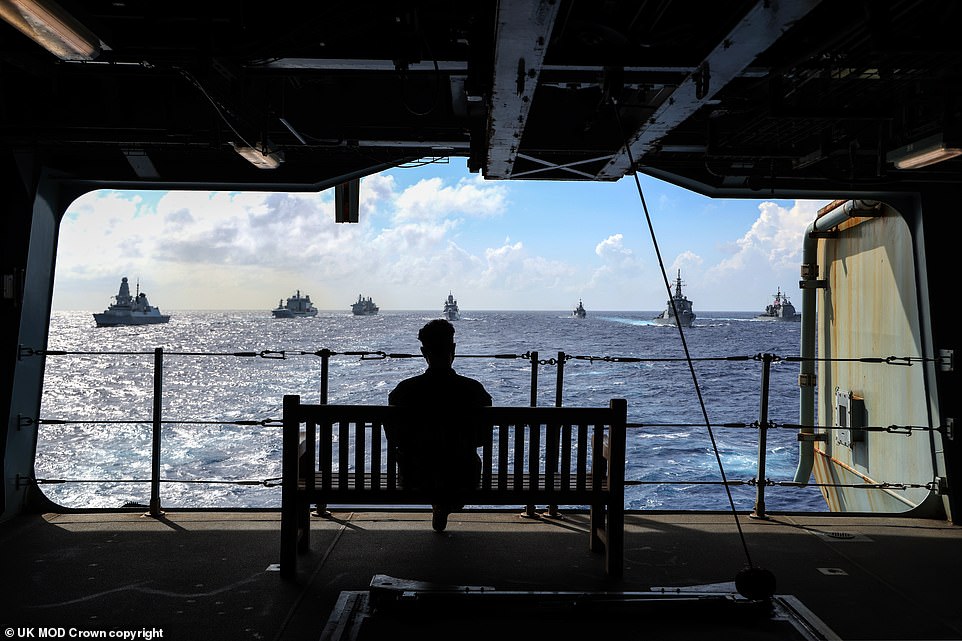 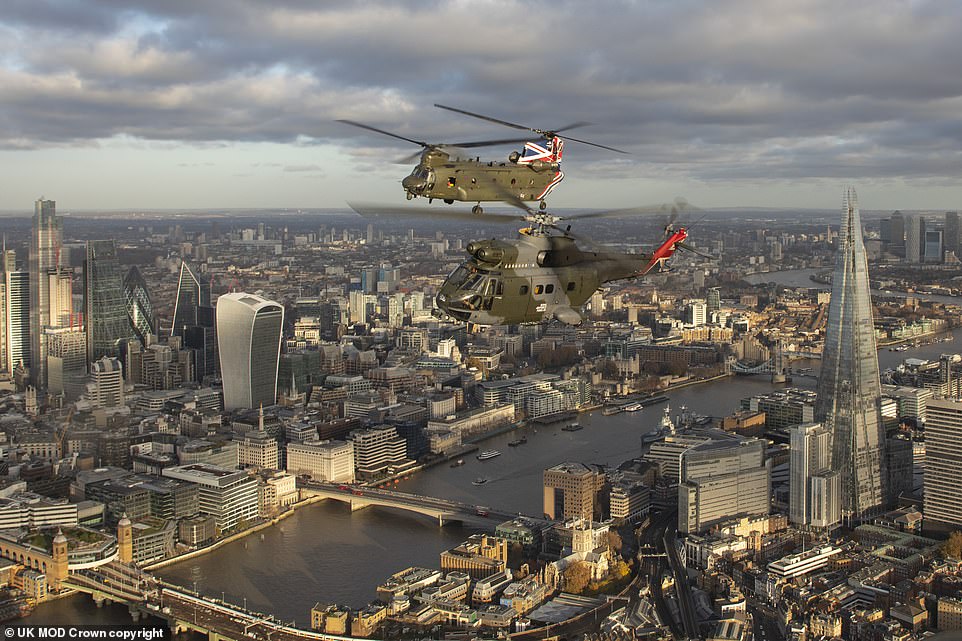 On November 25, a formation flight featuring specially painted Chinook and Puma helicopters flew over southern England. The Puma, from RAF Benson, pictured front, had just completed 50 years in service, while the Chinook, pictured rear, completed 40 years service. The Chinook is based at RAF Odiham in Hampshire 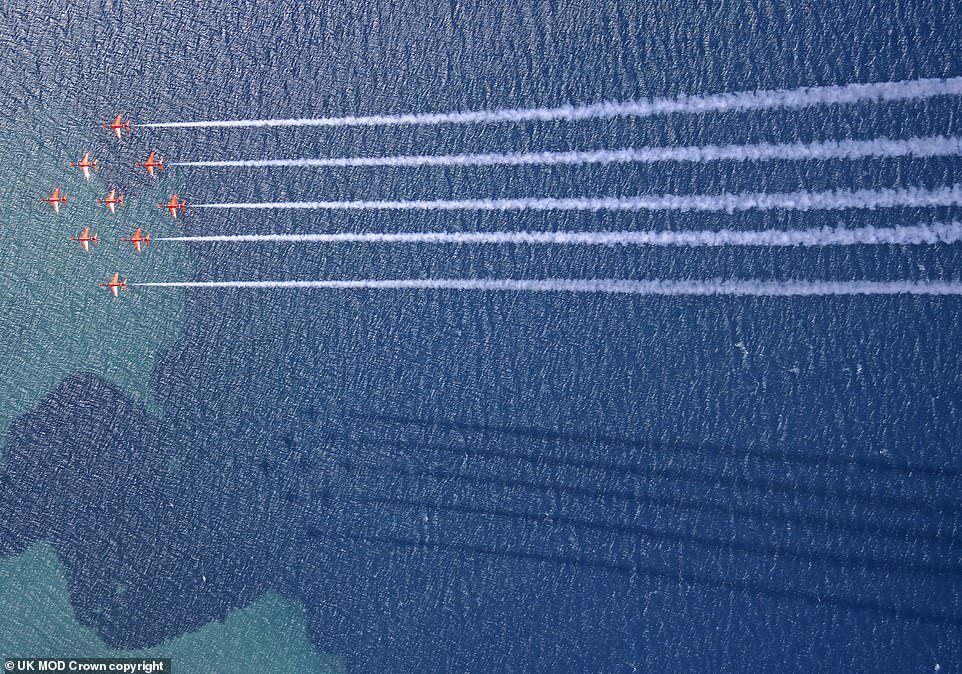 Here the RAF Red Arrows are practising their display routine flying in a diamond formation during pre-season training in Greece. The photograph was taken from the rear seat of Red 10, by Corporal Adam Fletcher. The aircraft was flown by Squadron Leader Adam Collins 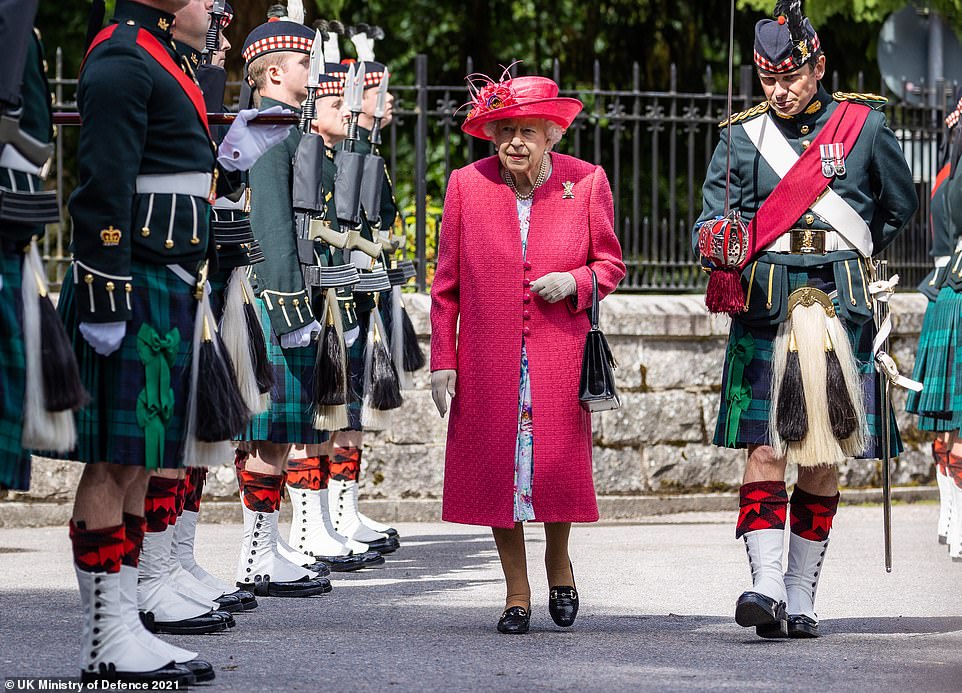 Queen Elizabeth II, pictured centre at her arrival in Balmoral inspects an honour guard formed of 5th Battalion, the Royal Regiment of Scotland, as she arrived at her summer residence 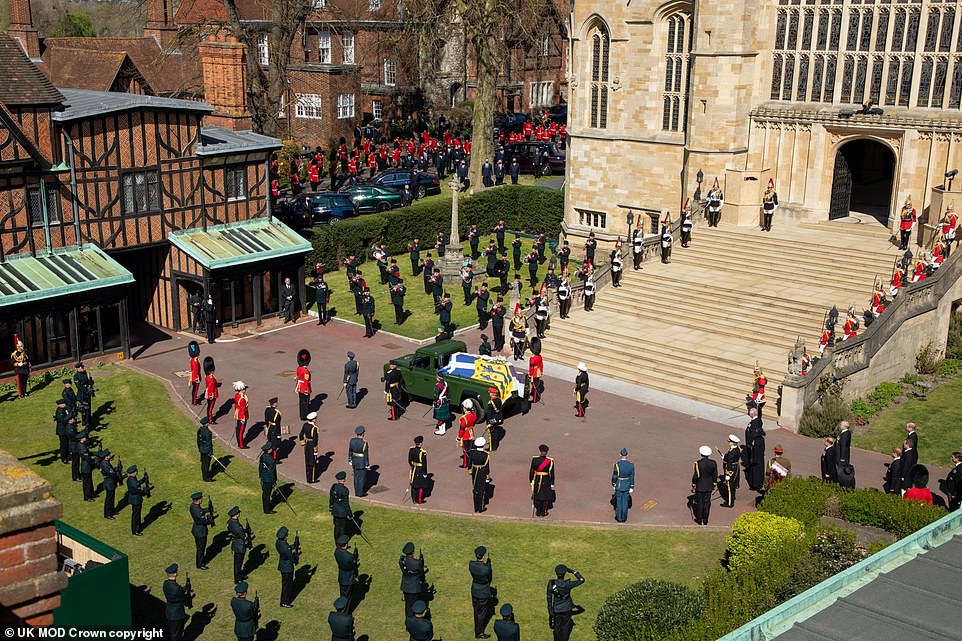 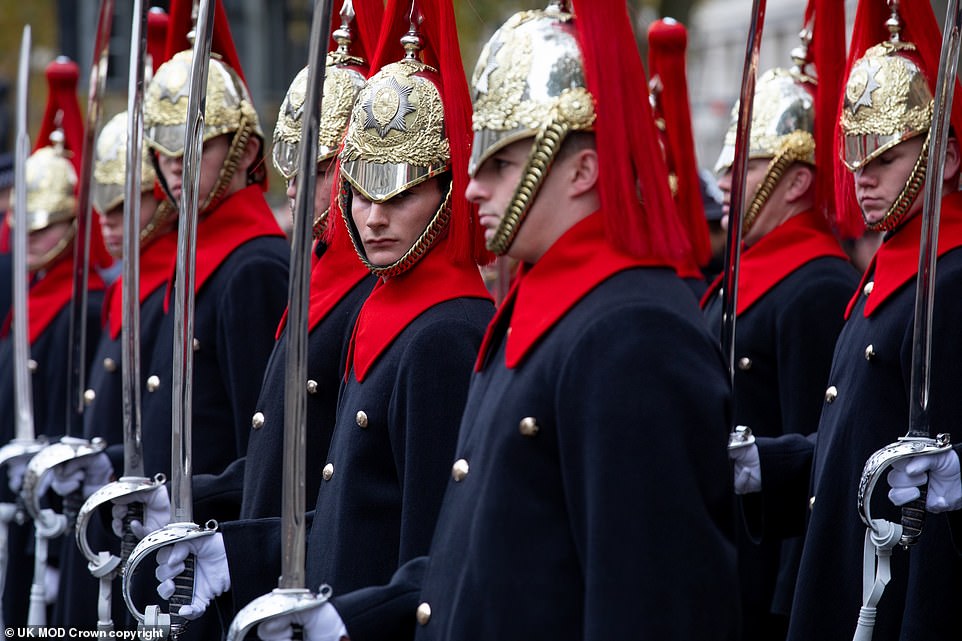 The Queens Life Guard were photographed on parade at the Cenotaph for Remembrance Sunday, November 14. More than 700 members of the military took part in the commemoration, which also marked the 100th anniversary of the founding of the Royal British Legion 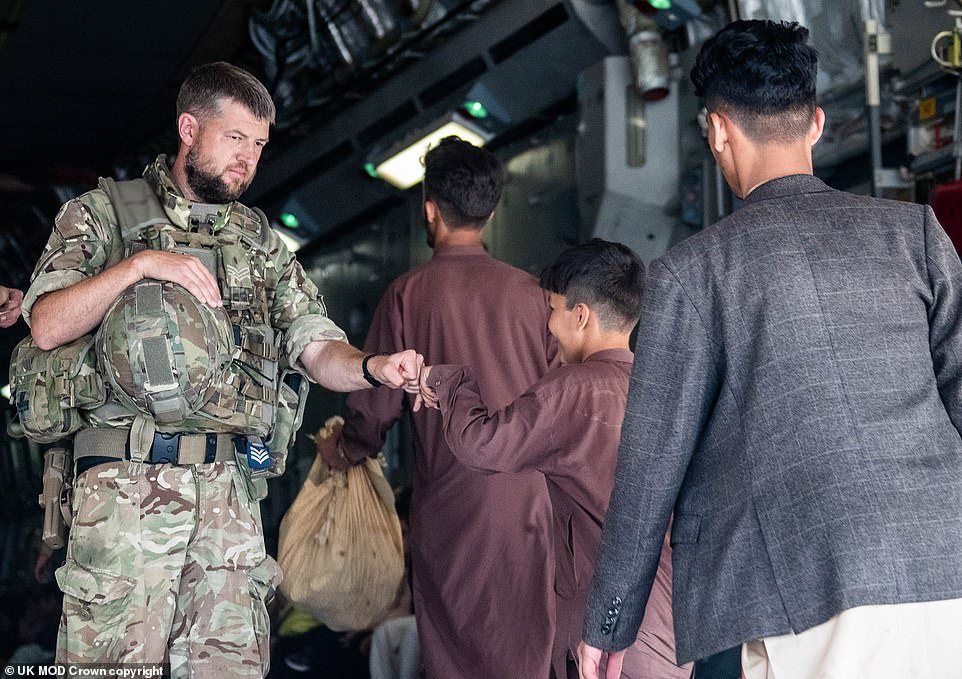 Members of the military were involved in the mass evacuation of civilians from Kabul following its fall to the Taliban. Service personnel, including this Sergeant worked around the clock to assist the evacuation of British nationals and Afghans eligible for relocation 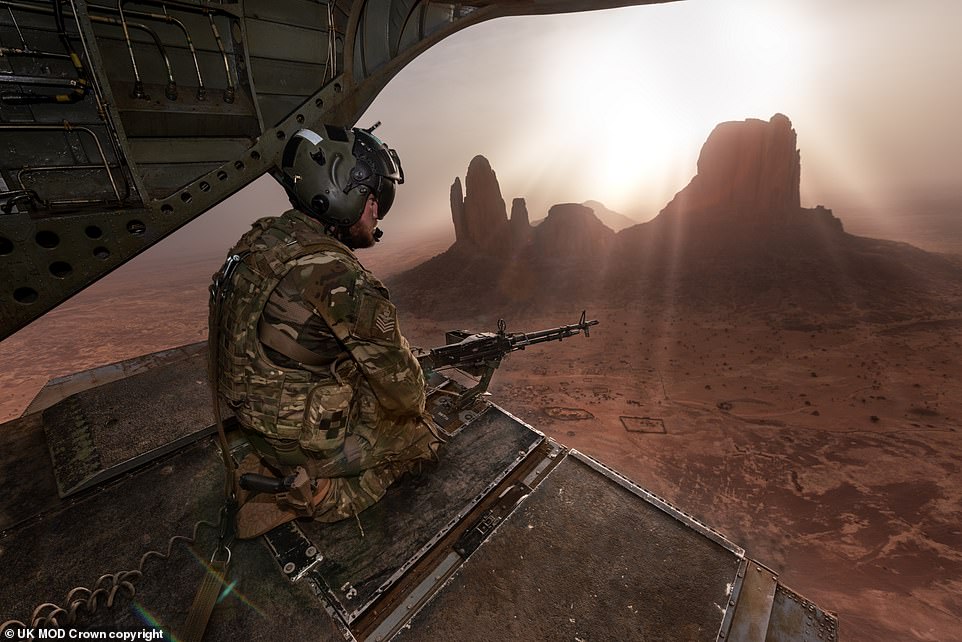 UK Troops were also involved in operations in Mali. This flight sergeant from RAF Odiham manned a machine gun at the rear of his Chinook which was flying through the Hombori mountains at sunset in the West African country 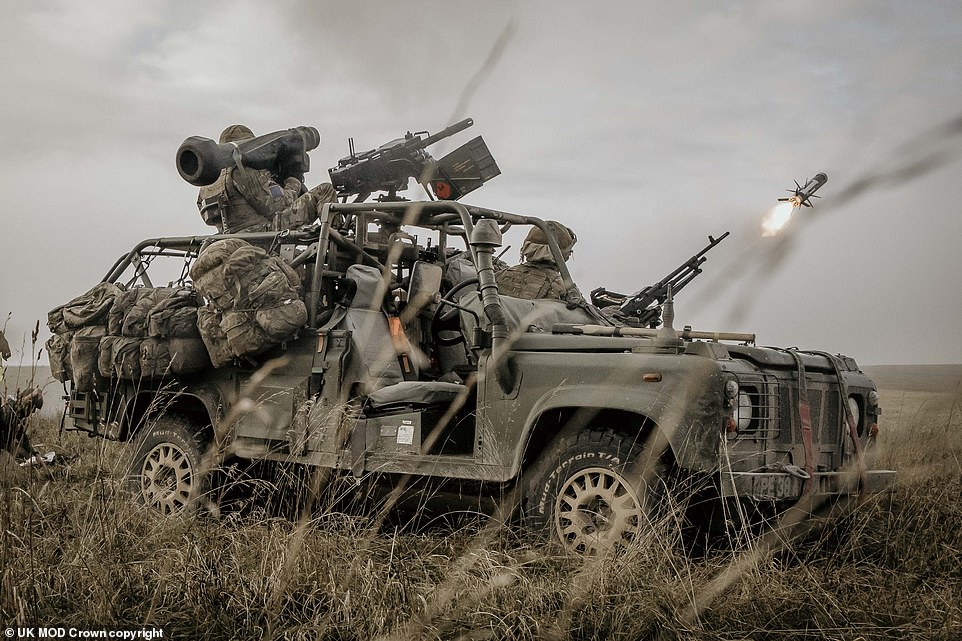 Paratroopers involved in this training mission engaged an advancing force  of advancing vehicles, including tanks and armoured personnel carriers. The troops, from the 2nd and 3rd Battalions of the Parachute Regiment, used Javelin and NLAW anti-tank missiles, 81mm mortars, Grenade machine guns, heavy machine guns and general purpose machine guns during the exercise on Salisbury Plain 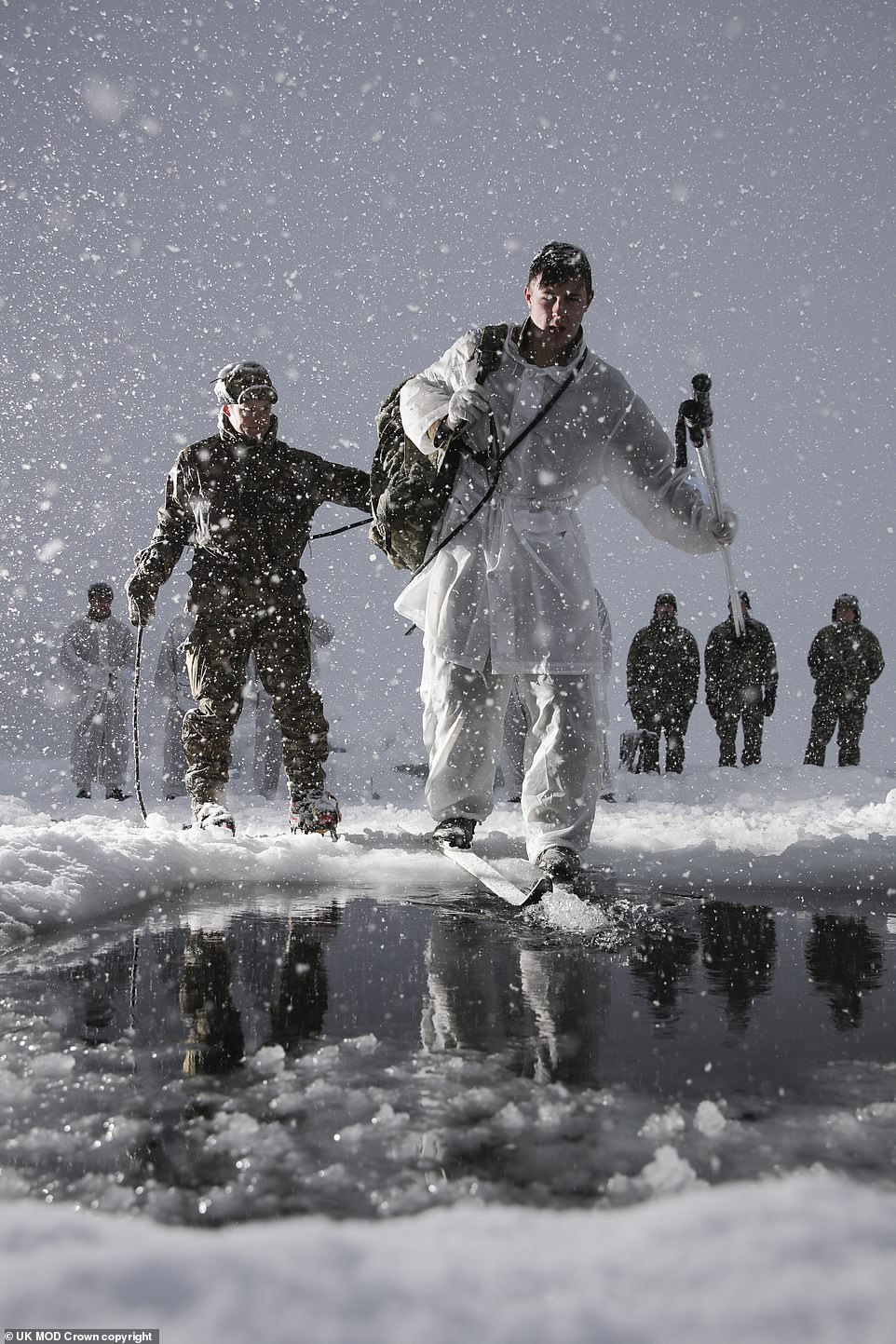 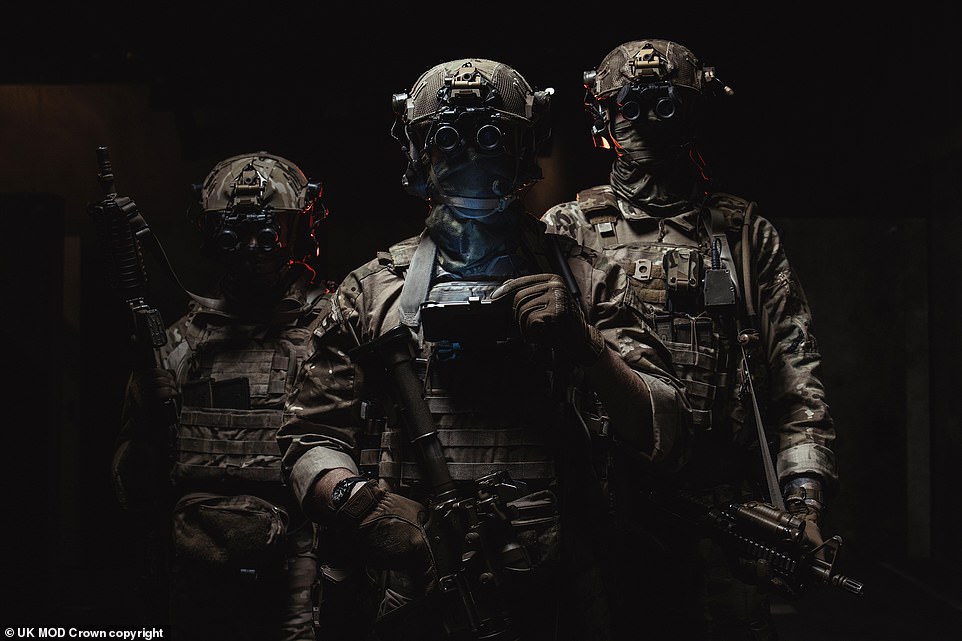 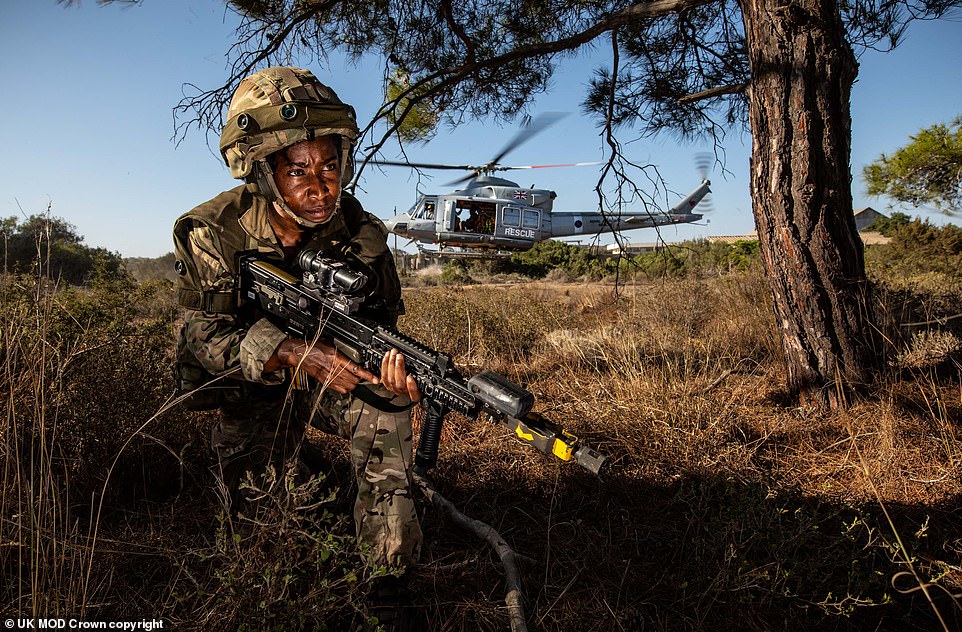 This soldier is involved in a staged medivac from 84 Squadron at RAF Akrotiri in Cyprus. Exercise Lion Star was a four-week training mission conducted in a challenging temperature environment 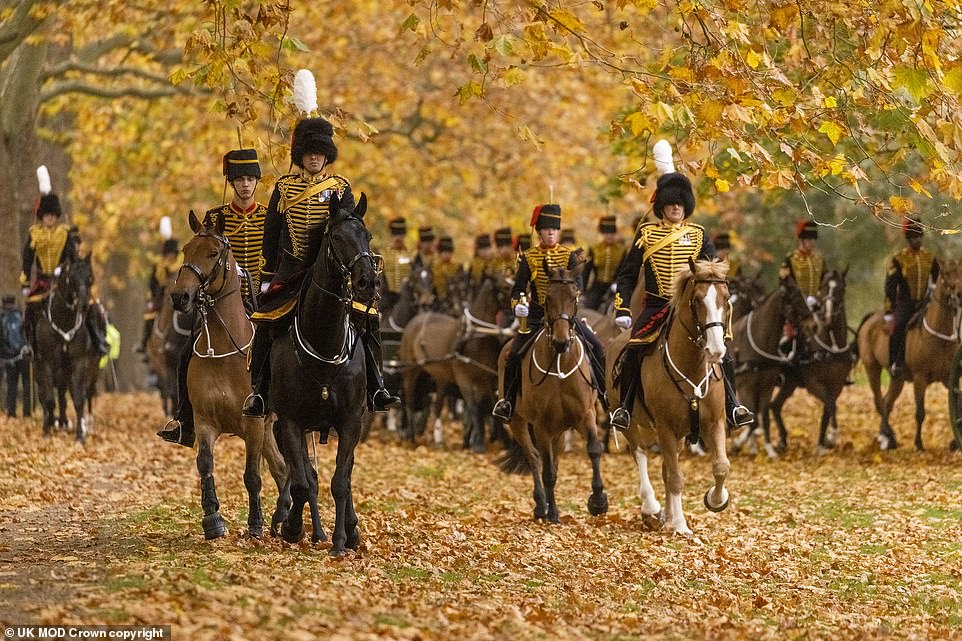 Members of the King’s Troop Royal Horse Artillery fired a 41 gun salute to mark the birthday of Prince Charles on November 15. The six guns fired all 41 rounds simultaneously. The tribute took place in Green Park, London 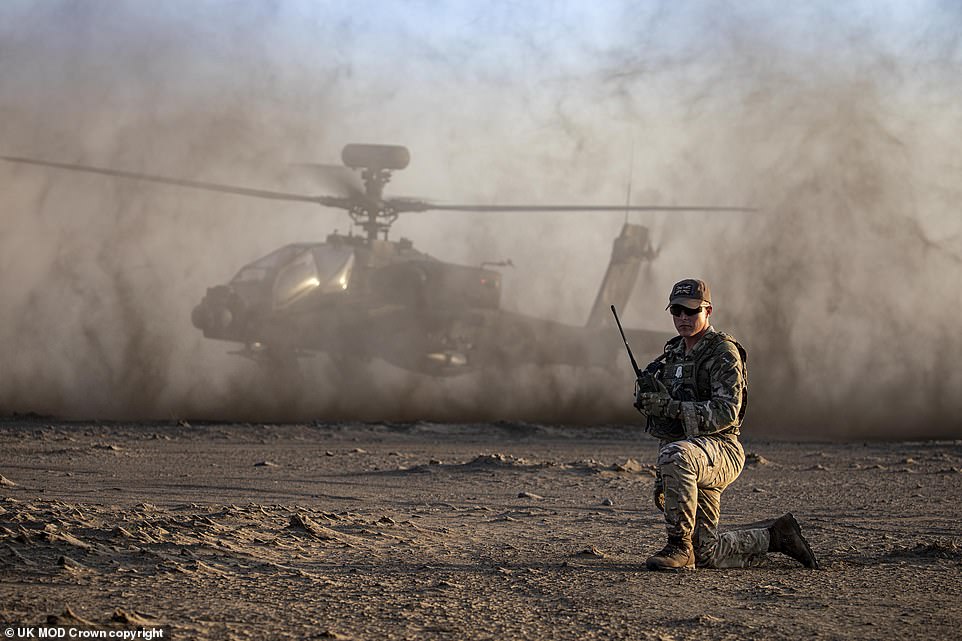 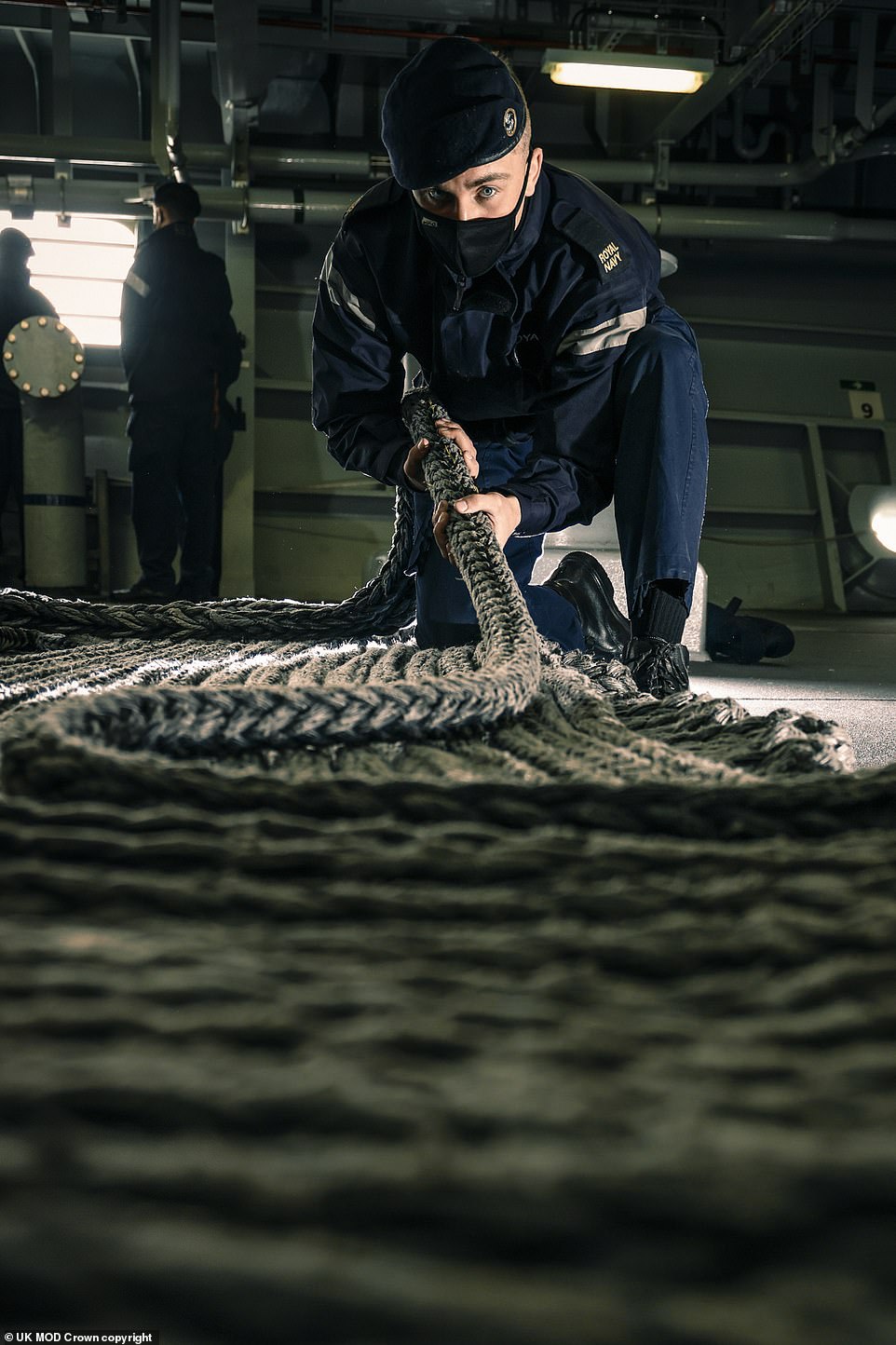 An Able Seaman, pictured here, was securing the lines onboard HMS Prince of Wales during final preparations as the Ship left Portsmouth Dockyard for its first operational tasking 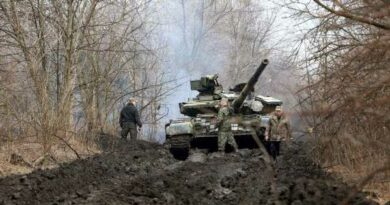 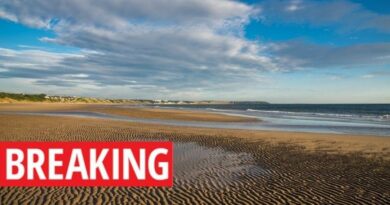