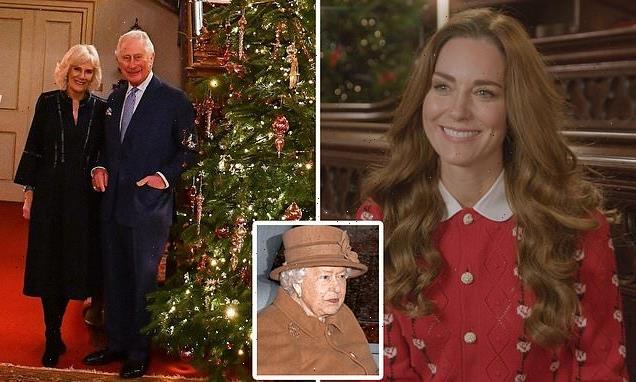 One’s quiet Christmas: The Queen may skip her annual trip to Sandringham – meaning she’ll be apart from William, Kate and their children

The Queen could be without some of her nearest and dearest this Christmas if her plans to spend the festive season at Sandringham are cancelled.

After her ‘regretful’ decision to scrap next week’s traditional pre-Christmas dinner for up to 50 family members due to soaring Covid cases, sources told the Daily Mail yesterday that ‘all plans were under consideration’ – including her annual trip to Norfolk.

It means that the 95-year-old – spending her first Yuletide without her husband of 73 years, Prince Philip – could spend a second festive season at Windsor Castle.

But the Duke and Duchess of Cambridge and their three children still intend to travel to their Norfolk home for the holidays, and their plans are unlikely to change – meaning the Queen may not be able to join them as planned.

A final decision is expected to be made early next week as royal aides anxiously monitor government advice.

The Queen is still keen to go to her beloved 20,000-acre estate at Sandringham, where she normally stays until early February – particularly as she spent last year at Windsor alone apart from her late husband and a handful of staff, due to lockdown.

But a second royal source said last night they felt her Norfolk sojourn was ‘increasingly in the balance’ given the fluctuating situation. ‘Her Majesty always leads by example, regardless of her personal preferences,’ they said.

However, as long as the Government does not restrict social mixing, the Queen will not be alone.

The Prince of Wales and the Duchess of Cornwall plan to join her on Christmas Eve with the Duke of York, Princess Anne and the Earl and Countess of Wessex.

Meanwhile, the Duchess of Cambridge was dressed for the festive season in a glimpse of her carol concert.

A trailer released yesterday shows Kate, 39, sporting a red Miu Miu cardigan at Westminster Abbey in rehearsals earlier this month. The £1,350 cashmere top has a pattern of black and white roses, with pearl buttons and detachable Peter Pan collar.

The service, hosted by the duchess, has been developed with BBC Studios Events Productions but will be broadcast on ITV at 7.30pm on Christmas Eve as part of a special programme, Royal Carols: Together At Christmas.

William and Kate dropped the BBC as broadcaster in the wake of its series The Princes and the Press, which they criticised for giving credibility to ‘overblown and unfounded claims’ about the Royal Family.