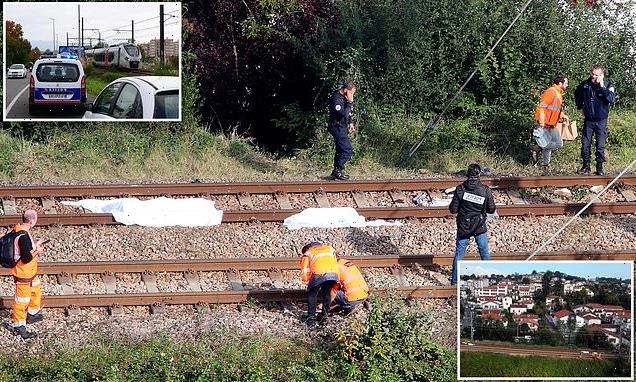 Three migrants were killed and one seriously injured by a train as they slept on railway tracks in southwest France.

The three victims were killed instantly when the train hit them on the tracks in Ciboure, near Saint-Jean-de-Luz, southwestern France, at about 5.30am today in what one official called a ‘terrible human drama’.

One of those who died was a 21-year-old man, while a fourth migrant survived with only a broken leg.

The migrants are believed to have crossed over the border from Spain, which is around seven miles away.

The mayor of Ciboure, Eneko Aldana-Douat, said a heightened police presence meant some migrants shied away from main roads.

‘The victims are migrants who were sleeping or were lying next to the tracks,’ he told the BFM TV channel. 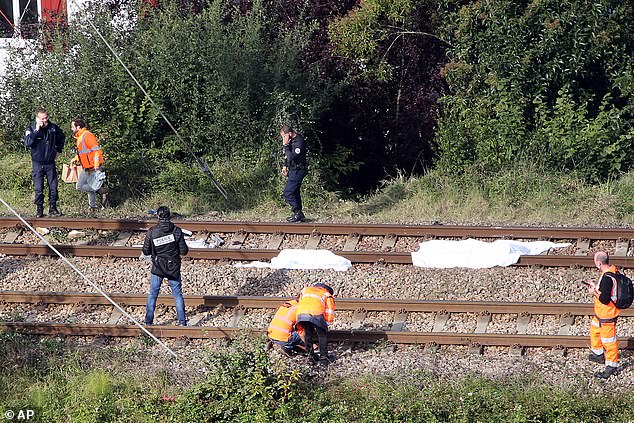 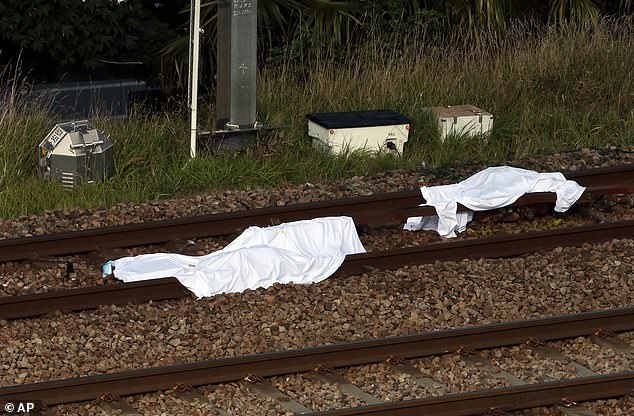 Another person survived, although they were seriously injured and rushed to hospital with a broken leg 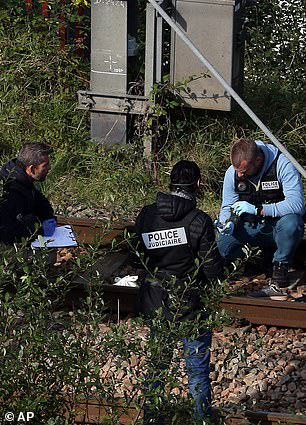 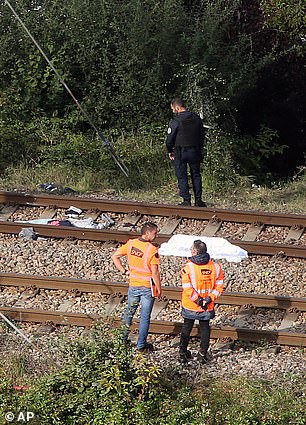 The accident happened in Ciboure, near Saint-Jean-de-Luz, southwestern France, at about 5.30am today. The regional prosecutor Jerome Bourrier, from Bayonne city, said the victims appeared to be Algerian migrants who had been expelled from Spain 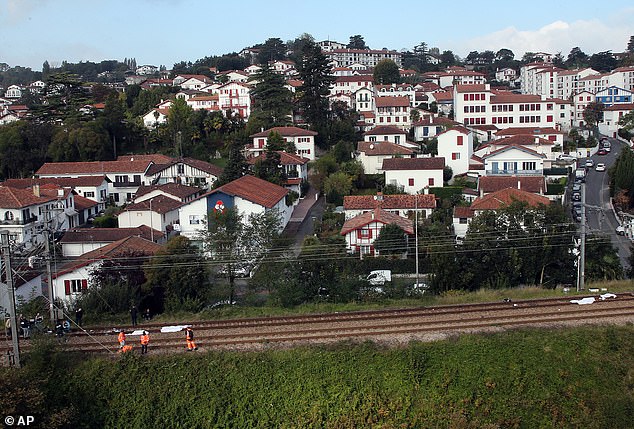 He said ‘many migrants pass through the area’ after they cross the border illegally from Spain and they often stay away from main roads towards Paris and Bordeaux because of ‘police pressure’.

The regional prosecutor Jerome Bourrier, from Bayonne city, said the victims appeared to be Algerian migrants who had been expelled from Spain and had been sleeping on the tracks.

He said it was a ‘terrible human drama’.

The train was travelling northbound from Hendaye, a seaside resort town on France’s border with Spain, towards the city of Bordeaux.

Mr Bourrier said one of the victims was a 21-year-old man who had recently received an expulsion order from Spanish immigration police.

Two others had documents suggesting they were in the same situation but French police had not yet verified their identities.

Mr Bourrier said while migrants walk on the tracks in the area, given its proximity to the border, ‘what’s more surprising here is that the people were lying down, even resting’. 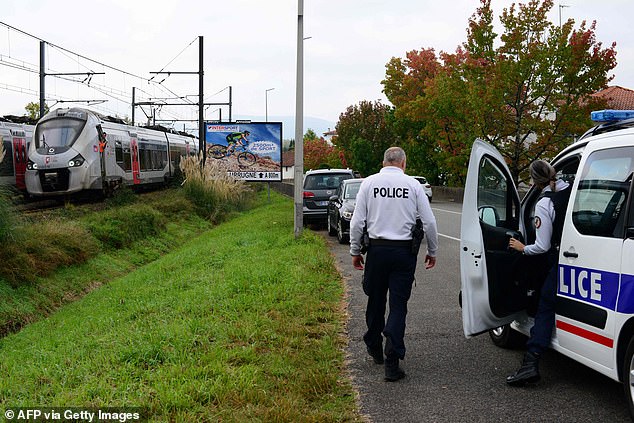 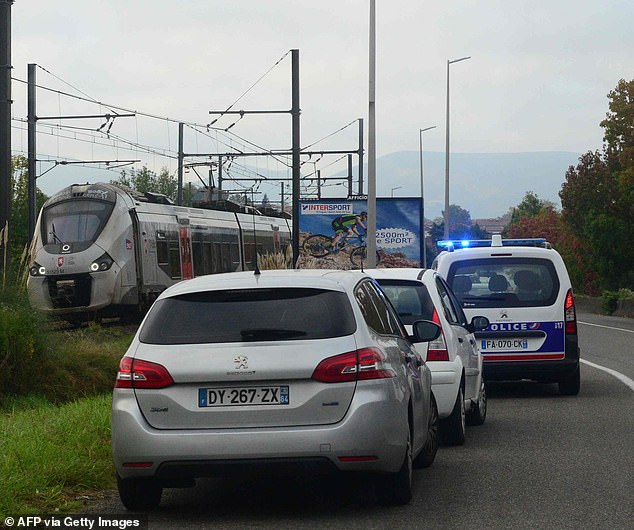 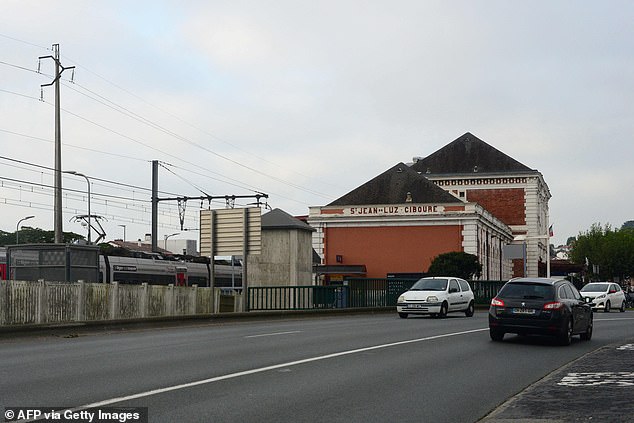 Bayonne prosecutor Jerome Bourrier said while migrants walk on the tracks in the area, given its proximity to the border, ‘what’s more surprising here is that the people were lying down, even resting’

The only survivor is seriously injured in hospital although the Bayonne prosecutor said their life was not in danger.

A police spokesman said it was unclear why the migrants were on the tracks but the San-Juan-de-Luz police station and the Bayonne judicial police opened an investigation.

Migrant routes to Europe: What are the long and perilous routes thousands of people are taking?

Illegal migrants seeking to enter Europe use various long and perilous routes that are evolving as authorities attempt to stem the flow of new arrivals.

Here is an overview of how people are reaching the continent.

How do migrants reach Europe?

Most arrive by crossing the Mediterranean, according to the UN High Commissioner for Refugees (UNHCR), with 172,000 entering through Greece, Italy and Spain last year.

The number of arrivals is down sharply from the peak in 2015, when 1.02 million entered Europe via the Mediterranean. 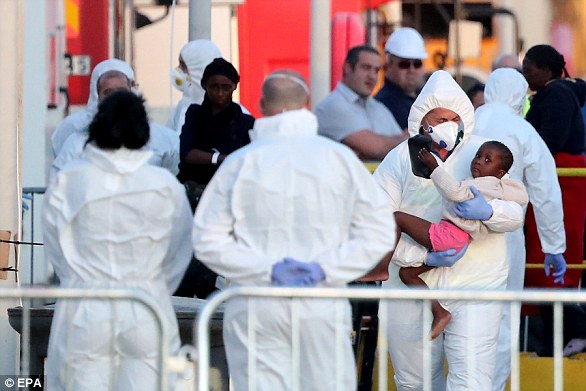 Maltese paramedics aid migrants on board the Lifeline NGO rescue vessel stranded in the Mediterranean with more than 200 migrants as it finally berthed in Valletta, Malta, on 27 June 2018

What are the routes across the Mediterranean?

Most of the crossings last year were from Libya or Tunisia into Italy, known as the ‘Central Mediterranean’ route, says the EU’s Frontex border agency.

It was used by 118,962 people, mostly Nigerians, Guineans and Ivorians.

But arrivals via this route have plunged 75 per cent since a controversial July 2017 deal between Rome and the Libyan coastguard.

Crossings have also dropped sharply from Turkey to Greece, the ‘Eastern Mediterranean’ route. After close to 900,000 migrants in 2015, Frontex recorded only 42,000 last year, essentially Afghans, Iraqis and Syrians.

The decline came after a 2016 deal between the EU and Turkey in which Ankara agreed to take back illegal migrants landing on Greek islands in exchange for billions of euros in aid and other incentives.

More recently there has been a sharp increase in the use of a route between Morocco and Spain.

The number of migrants and refugees using the route to reach Spain stood at 20,992 between January 1 and July 25 according to the International Organization for Migration.

The renewed popularity of the route is straining Spain’s law-enforcement response and its social safety networks.

Of the 972 who lost their lives at sea trying to make the crossing to Europe, nearly a third (292) died trying to reach Spain.

Other ways into Europe

The main secondary route into the EU is through the western Balkans into Eastern Europe.

But this path joins up with one used by migrants who have already passed through Turkey and Greece, meaning the actual numbers of new arrivals don’t always add up.

Routes into Europe are constantly evolving: according to the French embassy in Slovenia, a new one is developing from Greece through Albania, Croatia and Slovenia, with nearly 1,800 crossings between January and May this year.

An ‘Arctic route’ was briefly in operation 2015 when about 100 migrants crossed a day from Russia into Norway on bicycle.

There are also several routes from African countries to departure points on the Mediterranean, some involving a dangerous crossing of the Sahara desert.

A Somali leaving from Mogadishu, for example, could travel via Addis Ababa, Khartoum, Cairo and then Tripoli, ahead of the sea crossing to Europe.

An Ivorian leaving from Abidjan might pass via Ouagadougou, Niamey and Agadez – Niger’s renowned ‘gateway to the Sahara’ – to reach Libya.

To this should be added the toll for the perilous Sahara crossing, which the International Organization for Migration says is probably as high as that for the Mediterranean.

United for Intercultural Action, a Dutch group which records the identities of victims of the crossings, says at least 34,361 migrants have died trying to reach Europe since 1993.

‘Thousands of others have never been found,’ it says.