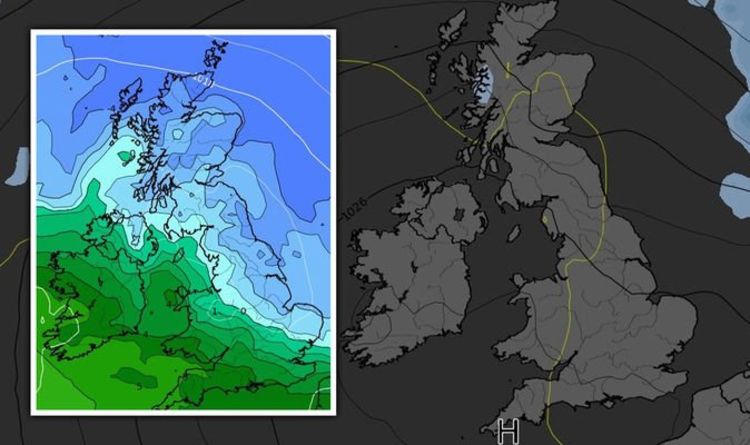 Maps show this week sees a colder front of weather from the northwest of Scotland pushing down as far as the midlands, with areas like London potentially seeing the mercury read at 6C (42.8F). Meteorologists have also held there is a chance for heavy rains in the coming weeks.

WXCharts maps, which use data from the US National Center for Environmental Prediction, show the rest of the week ranging between milder temperatures and colder fronts.

Further north, areas like Newcastle and Manchester are set to stay closer to 7C throughout the day.

Jim Dale, British Weather Services, added to Express.co.uk conditions are set to return to their seasonal averages, with wetter weather returning next week.

He said: “This week no problems, mainly sedate. Next week wetter & windier but no storms as such.

“Wettest in the northwest – as per usual.  Not overly cold, indeed just reverting to the seasonal averages.”

She said: “We have also got this new weather front bringing in this cloud and also some rain.

“The weather fairly settled in the south, not much in the way of wind.

“This rain is going to continue to push southwards and eastwards, cloud building ahead of it.”

It comes as long range forecasts hold the end of October could see snow.

Wales is set to see snowfall by 6am on October 24, according to the latest charts of netweather.tv, while the west of Scotland will also see heavy snow.

Brian Gaze, director and forecaster for The Weather Outlook, warned The Mirror there could be “nighttime frosts” towards the end of the month.

He said: ”Towards the end of the month, some computer models are indicating that high pressure will become centred to the north or west of the UK.

“If that happens there would be a growing likelihood of colder weather leading to a risk of nighttime frosts becoming quite widespread.

John Hammond, weather forecaster, told The Sun freezing weather could also be brought about due to the weakening of the polar vortex with less strong winds than normal over the Arctic circle.

“There are signs of the stratosphere experiencing an unusual warming in the next few days, causing the polar vortex above the Arctic Circle to become less strong than normal later in October.

“These high-altitude winds normally intensify as we head towards winter.

“So an unusual weakening of the polar vortex may well have impacts on our weather later through autumn and into early winter.

“Sudden stratospheric warming events can sometimes lead the polar vortex to go into reverse, which can have dramatic impacts on winter weather and increase the chances of severe cold.”

Nasa photographer picks his ten favourite pictures of the decade