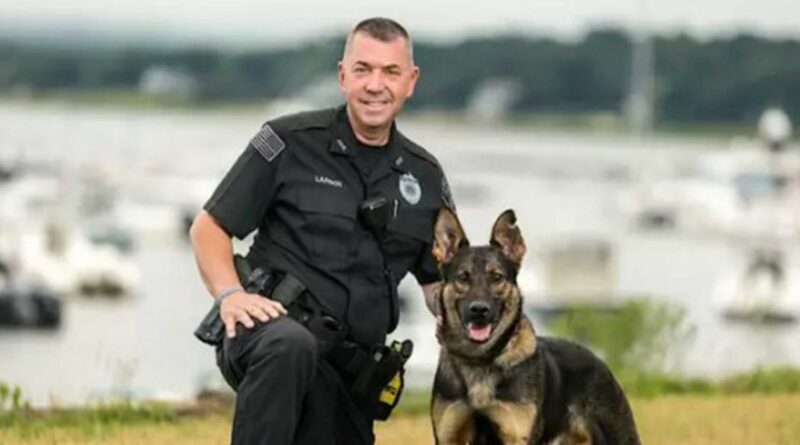 A police officer was forced to kill his own dog after it turned on him at a crime scene and attacked him.

Keith Larson, a veteran K-9 officer, was responding to a call on Tuesday December 29 with his police German Shepherd Nico.

The pair had just pulled into a car park when Nico bit Keith and the officer was forced to try to disengage the dog.

Emergency veterinary services were called to the scene but sadly Nico died from his injuries.

Officer Larson also received medical treatment and was transported to South Shore Hospital for injuries to his hands.

The Plymouth Police Department has since released a statement about the incident, alongside an image of Nico and Officer Larson together.

Speaking at a press conference, Police Chief Michael Botieri said: "The report we got from the sheriff's department is that they were working together as a team and [had] no issues.

"It happened in less than 30-45 seconds, which is a long time that he had to go through that. I'm sure you realise it is difficult for as K-9 officer to dispatch their own dog like that.

It's always difficult to see any of your officers injured. We feel bad about that."

In a statement, the force said: "At approximately 9.20am on this date, officers were dispatched to a call for service where the suspect had fled the scene.

"Officer Larson pulled into a parking lot in the area of 179 Court Street to prepare his K9 for the call. Officer Larson was bitten by Nico during this interaction.

"After several attempts to disengage Nico, officer Larson was forced to utilise his service weapon. Unfortunately Nico died at the scene.

"Several officers as well as Brewster Ambulance personnel were dispatched to assist Officer Larson. Officer Larson was transported to South Shore Hospital to be treated for injuries to his hands.

"Officer Larson is a 17-year veteran of the Plymouth Police Department with an exemplary record. He has been assigned to the K9 Unit since March of 2017.

"He has been assigned to Nico since August of 2018. Officer Larson received a bite to his hand while deploying Nico in April of 2020. Officer Larson and Nico were reassigned to the Sheriff's Department K9 Academy and rectified for service in July of 2020."

Christmas chaos as No10 says families CAN gather this year