Nearly a decade after purchasing a seat on Virgin Galactic's private spaceship, Ashton Kutcher would be close to finally taking that ride — if he didn't settle down with Mila Kunis.

The actor-investor revealed he had a seat on Richard Branson's next flight, but realized going to space shouldn't be a priority over his family.

"When I got married and had kids, my wife basically encouraged that it was not a smart family decision to be heading into space when we have young children. So I ended up selling my ticket back to Virgin Galactic," Kutcher told Cheddar News. "And I was supposed to be on the next flight, but I will not be on the next flight."

Kunis may have talked some sense into her husband for now, but the actor has plans to take that trip.

Actor and investor @aplusk says he was supposed to be on the next Virgin Galactic flight, but sold his ticket to space. 🚀 Don't miss the full interview on Cheddar at 3:20 p.m. ET. https://t.co/fi07qhm3FEpic.twitter.com/HVMei8mnrZ

Branson and five others reached the edge of space with a suborbital flight last Sunday. While the billionaire hopes to kick off space tourism, it'll cost a traveler a pretty penny.

Kutcher reportedly dropped $200,000 for a spot on Virgin Galactic in 2012, right around the time he and Kunis started seeing each other. Things quickly turned serious for the former That '70s Show co-stars, as they wed in 2015. The actors share two kids: daughter Wyatt, 6, and son Dimitri, 4. 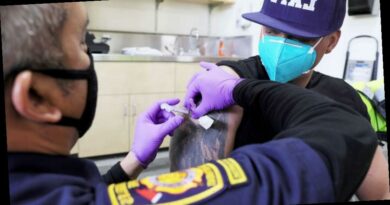 Employers grapple with tough new question: Can they demand workers get a COVID-19 vaccine?