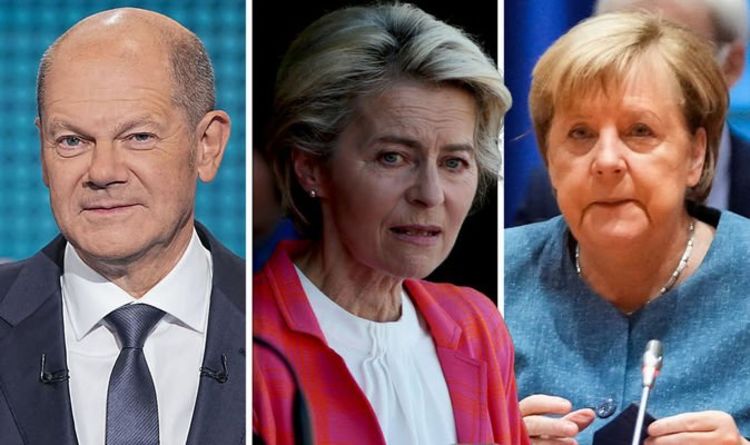 Angela Merkel will leave her German politics in the wake of the election on Sunday, September 26, paving the way for real change in the German political sphere. Ursula von der Leyen has shared a close relationship with Ms Merkel for years. There could be significant consequences for Ms von der Leyen which could prove risky for her and the future of her EU career.

Germans will head to the polls in a matter of days to elect a new Chancellor with Angela Merkel preparing to abandon her post after 16 years.

Before becoming the Commission President, Ms Von der Leyen had been the longest-serving member of Ms Merkel’s cabinet.

But in the wake of Ms Merkel’s departure from politics, Ms von der Leyen will lose support from her mentor and a fellow Christian Democrat, as well as the backing of Ms Merkel’s conservative-led Government.

The latest polls ahead of the German election indicated the Social Democrats (SPD) are in the strongest position to win the most votes on Sunday.

According to Politico’s Poll of Polls, the SDP is currently polling with 25 percent support, compared to the CDU/CSU’s 21 percent.

The party’s chancellor candidate Olaf Scholz, who has been Ms Merkel’s deputy, is in a key position to take over from the current Chancellor after the election, with many German electors backing the candidate.

While Germans endorse the SPD and Mr Scholz – the appointment of this party on Sunday, could lead to a rare and perilous situation in Brussels.

The polls indicate there is a strong chance a coalition Government featuring the liberal Free Democrats could also be the resulting parliament in the wake of the election.

The party is currently ranking at 11 percent support according to the Politico Poll of Polls.

“But he has no understanding for politicians who only generate headlines but do not provide any content.

“Ms von der Leyen is known for such a gap.”

This type of hostility is a key reason by some allies of Ms von der Leyen are growing increasingly anxious about what the rise of the SPD could mean for the EU.

Ms von der Leyen is currently due to remain in her position until 2024 – but if Mr Scholz opposes the Commission President she could perhaps lose out on a second term after that time.

When Ms von der Leyen was nominated for her role in 2019, some of her fiercest critics were German Social Democrats.

But in the end, she was chosen over German MEP Manfred Weber, the candidate from the European People’s Party – a move which created more bitterness between Ms von der Leyen and some conservatives.

With Ms Merkel’s support for Ms von der Leyen, some of the frustrations levied at the Commission President were alleviated, but with the former’s departure it is likely the latter will face a more acrimonious climate.

One senior diplomat highlighted the Commission President was also keen to elevate French interests in her recent State of the European Union address.

They told Politico: “French priorities were there at every turn.”

One diplomat added any tension between Ms von der Leyen and Berlin “could push her to get protection in Paris” and see her “create an unbalance even strong” in France’s favour.

Many have drawn parallels between the potential tensions Ms von der Leyen will face with the former Italian centre-left Prime Minister Romano Prodi who was Commission president 17 years ago.

Mr Prodi was in a fierce rivalry with Silvio Berlusconi who was prime minister in Rome at the time.

The two men were at loggerheads and eventually, Mr Prodi decided to leave his role to return to Italy and reclaim his premiership.

A similar scenario also took place with polish ex-PM Donald Tusk, a former European Council president, who faced angry opposition from the government in Warsaw, led behind the scenes by his arch-enemy Jarosław Kaczyński.

These situations indicate the extent to which dissent from your homeland can play a crucial role in one’s EU success.

Amelia Bambridge was having ‘the best time ever’ hours before disappearing