A Shiba Inu statue representing Dogecoin has been placed in front of Wall Street’s famous Charging Bull statue, according to reports.

Dogecoin creator Billy Markus drew attention to the statue today, expressing surprise over the fact the statue was real and not merely a photoshopped image of Dogecoin’s chosen mascot.

“Wait, this is real,” Markus wrote. “I saw pictures of this before but I didn’t know what I was looking at, but someone actually put a $DOGE statue across from the Wall Street bull in NY. That’s just fantastic.” 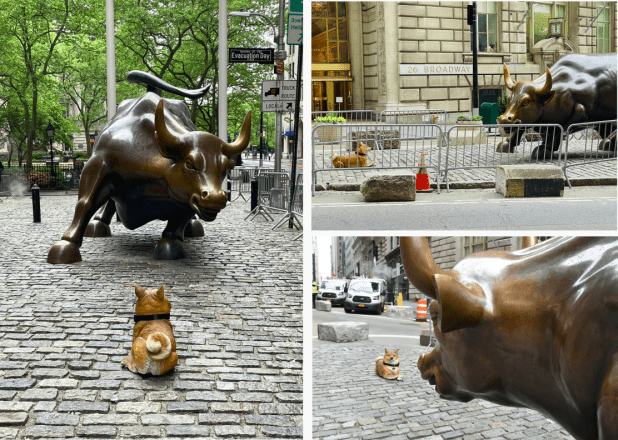 A Twitter user who goes by Camilo took credit for placing the statue. His feed shows that the statue has been in place since May 8 and presents the Shiba Inu dog from a variety of angles.

Attached to the statue is a dog tag that reads “Address: The Moon, Fate Loves Irony, 05/08/21, NYC.”  “The moon” refers to Dogecoin’s astronomical 20,700% rise in value over the past year. Meanwhile, “Fate Loves Irony” is a catchprase often used by Tesla CEO Elon Musk, who has played a key role in promoting Dogecoin.

It is not clear how long the statue will remain before it is removed by law enforcement or transferred to a different location by the owner.

Dogecoin as the Underdog

The statue’s placement is an apparent political statement about cryptocurrency’s capacity to combat the restrictions of traditional finance. It is similar in concept to Fearless Girl, another statue that was placed in front of the Charging Bull in 2017.

Though the Charging Bull statue represents big banks, it was itself originally a subversive symbol. The statue was created and illegally placed by Arturo Di Modica in 1989 as a response to the Black Monday stock market crash. Later, the statue gained a temporary permit and became a tourist attraction, solidifying its position.

The Dogecoin statue placed this week could meet the same turn of fate in terms of what it represents. Some within the crypto community have called the coin’s rapid rise unsustainable, while others have criticized celebrities for promoting it recklessly.

If DOGE prices eventually plummet, the cryptocurrency’s previous price gains could become a reminder of excess among cryptocurrency investors rather than a symbol of legitimate growth.

Dogecoin is currently priced at $0.50. It is the fourth largest cryptocurrency on the market, boasting a market cap of $65 billion.

Privacy Coins Must Change to Survive as Delistings Loom

Bitcoin Could "Pull a Tesla" Rally Before 2020 Ends: Analyst

How Facebook's Libra could lead you to clean out your wallet