A cryptocurrency inspired by Netflix’s internationally hit TV show Squid Game scammed investors in what appears to be a $3.38-million “rug pull” scheme.

Dubbed SQUID, the cryptocurrency plunged to almost a fraction of a cent minutes after crossing over $2,850 at 09:35 UTC on Nov. 1. The deadly drop oed following a 75,000% bull run, showcasing a greater demand for SQUID among traders after its debut on Oct. 26.

At the core of the retail craze lay the popularity of Squid Game. The scammers promoted SQUID as a play-to-earn cryptocurrency inspired by the South Korean TV fictional show in which people put their lives at risk to play a series of children’s games for the opportunity to win 45.6 billion won (~$38.7 million).

The marketing ploy helped push SQUID prices from $0.01 on Oct. 26 to over $38 on Sunday. The cryptocurrency then jumped to $90 on Nov. 1, ushering in a massive pumping round that pushed its price further to over $2,850, only to crash all the way down to $0.002 minutes later.

In the days leading up to the massive crash, traders had complained that they could not sell their SQUID holdings in the only available market, a decentralized exchange called PancakeSwap. In their defense, SQUID founders said they had deployed an innovative “anti-dumping technology” that limits people from selling their tokens against lower demand.

“Developers will take 10% of the entry fee with the remaining 90% given to the winner.”

The Squid Game cryptocurrency founders also said they were affiliated with the Netflix show as its official token partner. They also claimed that they had entered a strategic partnership with CoinGecko, a crypto data provider. However, in an interview with Cointelegraph, CoinGecko co-founder Bobby Ong refuted the claims, saying:

“[SQUID] did not meet our listing criteria, hence it will not be listed on CoinGecko. It’s most likely a scam.”

CoinMarketCap, a rival of CoinGecko, listed SQUID on its platform but warned visitors about the cryptocurrency’s dubious nature in a notice that read:

“There is growing evidence that this project has rugged. Please do your own due diligence and exercise extreme caution. This project, while clearly inspired by the Netflix show of the same name, is NOT affiliated with the official IP.”

Meanwhile, analysts also noted that the Squid Game token founders had no profiles on LinkedIn, with Twitterati Crypto Tyrion ruling SQUID as a “100% rug pull.”

It now appears like a “game over” scenario for the SQUID bag holders. 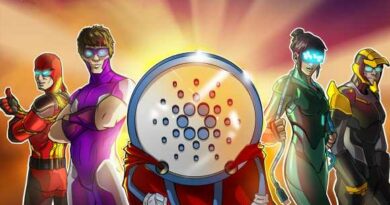 Cardano breaks out vs. Bitcoin as ADA price discovery nears $2

Over $160 million sent and received via China's DC/EP