Bitcoin (BTC) hit seven ounces of gold for the first time in over a year this week as the precious metal comes off all-time highs.

Data from CoinGecko showed BTC/XAU returning to the pivotal 7 ounce mark on Oct. 25, continuing to edge up to press-time levels of 7.02 ounces.

Despite Bitcoin losing ground after challenging $14,000, the gains against gold remained on Thursday, as the traditional safe haven felt the pressure of Coronavirus tensions and U.S. election uncertainty.

The last time that BTC/XAU broke 7 ounces was in September 2019.

“It looks like #Bitcoin is getting ready to conquer a larger portion of the gold market cap,” data monitor Ecoinometrics responded on Twitter.

“Right now #BTC is at about 2.4% of the market size of gold. This is only the beginning.” 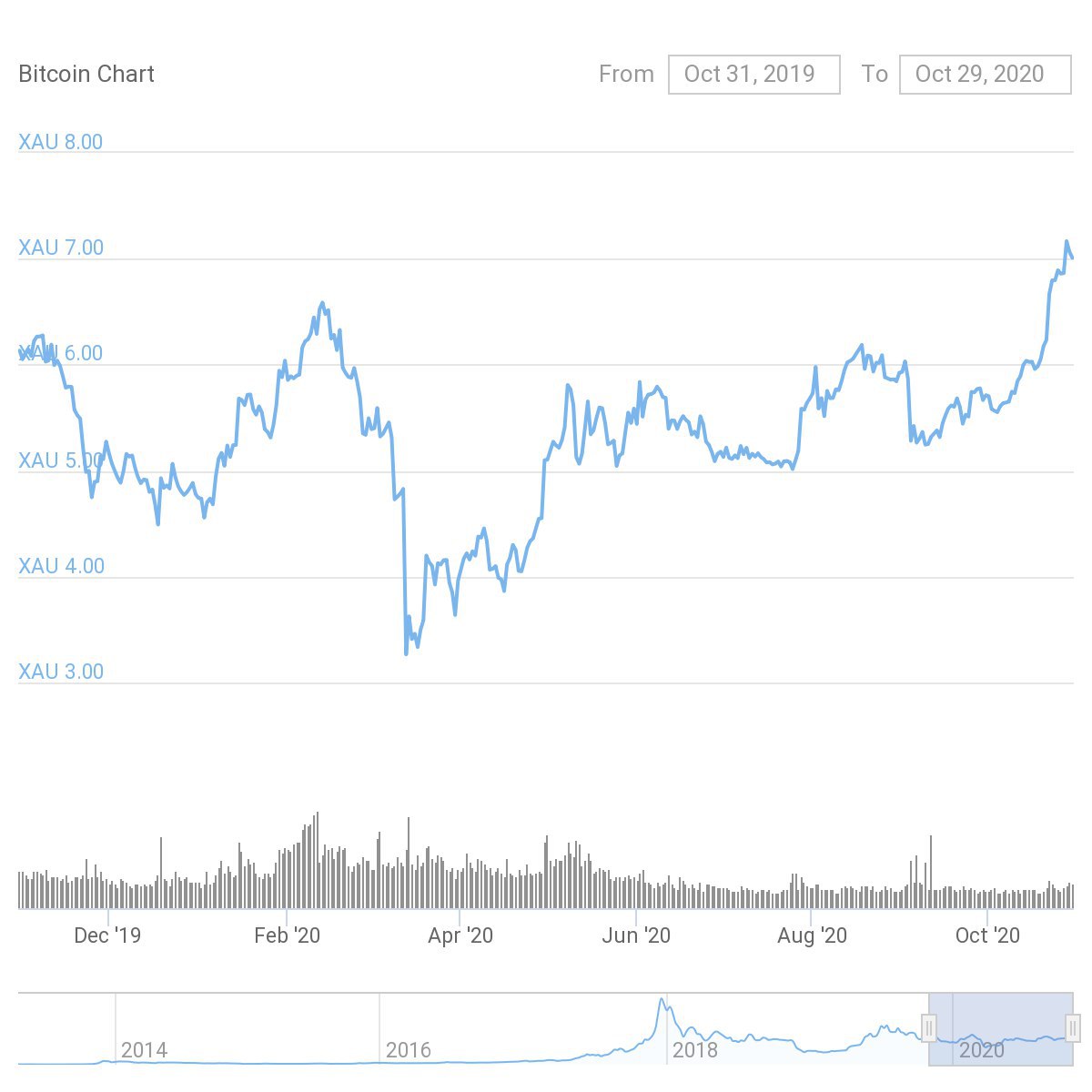 The sentiment echoed recent comments by Real Vision CEO Raoul Pal, who said that gold was “breaking down” against Bitcoin and that other macro assets would follow.

“The next thing I’m expecting is the correlations between BTC and the dollar and BTC vs equities to break down too… let’s see,” he wrote last week.

Reacting to the latest price action, embattled gold bug Peter Schiff did not hold back. Despite BTC/USD staying far from its $20,000 all-time highs, in a fresh Twitter post, Schiff described the largest cryptocurrency as a “bubble.”

“If you measure the size of asset bubbles based on the level of conviction buyers have in their trade, the #Bitcoin bubble is the biggest I’ve seen,” he claimed.

“Bitcoin hodlers are more confident they’re right and sure they can’t lose than were dotcom or house buyers during those bubbles.”

Bitcoin has yet to suffer as a result of renewed uncertainty across the global economy, leading to increased claims that its correlation with traditional assets has all but disappeared.

As Cointelegraph reported, correlation between BTC/USD and the S&P 500 hit zero again this week, as Bitcoin struck out on its own in its latest gains.

“It could not be more uncorrelated than it is right now,” Anthony Pompliano, co-founder of Morgan Creek Digital, summarized.

Ripple Sued for Alleged Violations of US Securities Laws