Bitcoin (BTC) sees a volatile start to a new week and a new month after its first ever monthly close above $60,000 — what’s next?

After a highly anticipated end to “Uptober,” bulls are looking to November to provide the next phase of what they hope — and sometimes promise — will be a BTC price surge like no other.

With everything to play for and solid buyer support in the upper $50,000s holding, Cointelegraph takes a look at what could help shape Bitcoin price action in the coming week.

Regardless of what comes next, market participants are in a celebratory mood this week as Bitcoin sees the highest monthly close in its history.

Bitcoin is anything but “up only” on short timeframes, however, and Sunday’s close was met with noticeable downside volatility post factum — a trip to $59,500 — before another surprise took it above $62,000 hours later.

Perhaps slightly nervous are fans of PlanB’s “worst case scenario” price predictions, these calling for at least $63,000 for the end of October.

While still more or less on track, for the series to continue its historical accuracy, $98,000 needs to be on the table by the end of this month.

For PlanB himself, however, the results have been more than satisfactory.

“Yes, Bitcoin might not close above $63K this month,” Cointelegraph contributor Michaël van de Poppe meanwhile added about the situation.

“However, @100trillionUSD his hitrate on the stock-to-flow model is way better than your trading performance, so I wouldn’t really roast him at all. Bitcoin at $61K is just as fine and close enough.”

After a correction from overnight lows, BTC/USD is trading at around $62,000. October, then, was its best month since December 2020, with returns just shy of 40%. 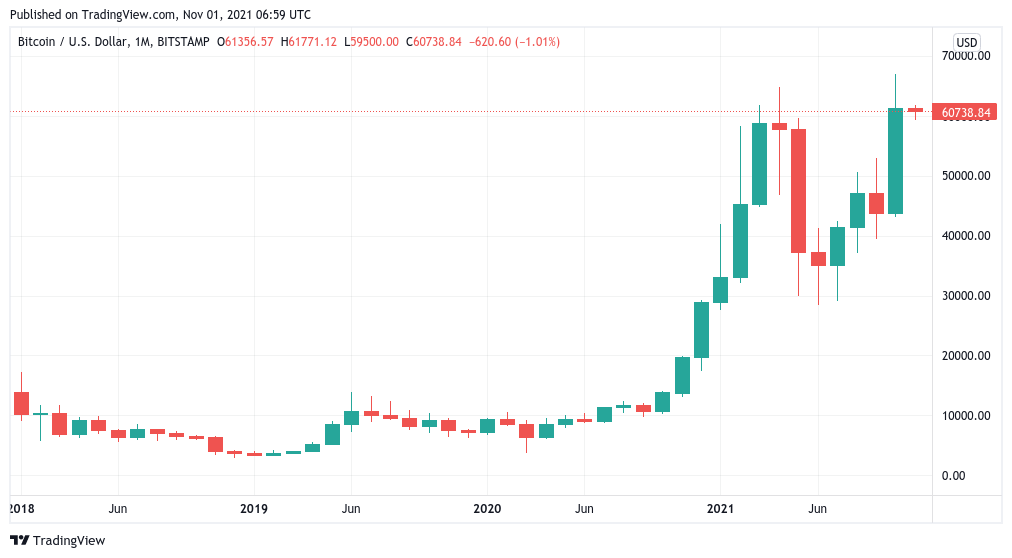 Those looking for something that truly is in “up only” mode need look no further than Bitcoin network fundamentals.

This week, difficulty will put in its eighth consecutive positive adjustment — something which has not happened since 2018.

Reflective of the increasingly competitive mining arena, the mining difficulty has now all but made up for the losses it necessarily inflicted after China forced miners to down tools in May.

Difficulty will increase to 21.89 trillion this week, just over 3 trillion below all-time highs.

Despite being impossible to “measure” in definitive terms, hash rate is still trending towards new all-time highs, estimates show.

Raw data trends up and down, and different estimates often end up with considerably different readings. The weekly average hash rate, however, now stands at around 159 exahashes per second (EH/s) — closer than ever to the 180 EH/s record from April. 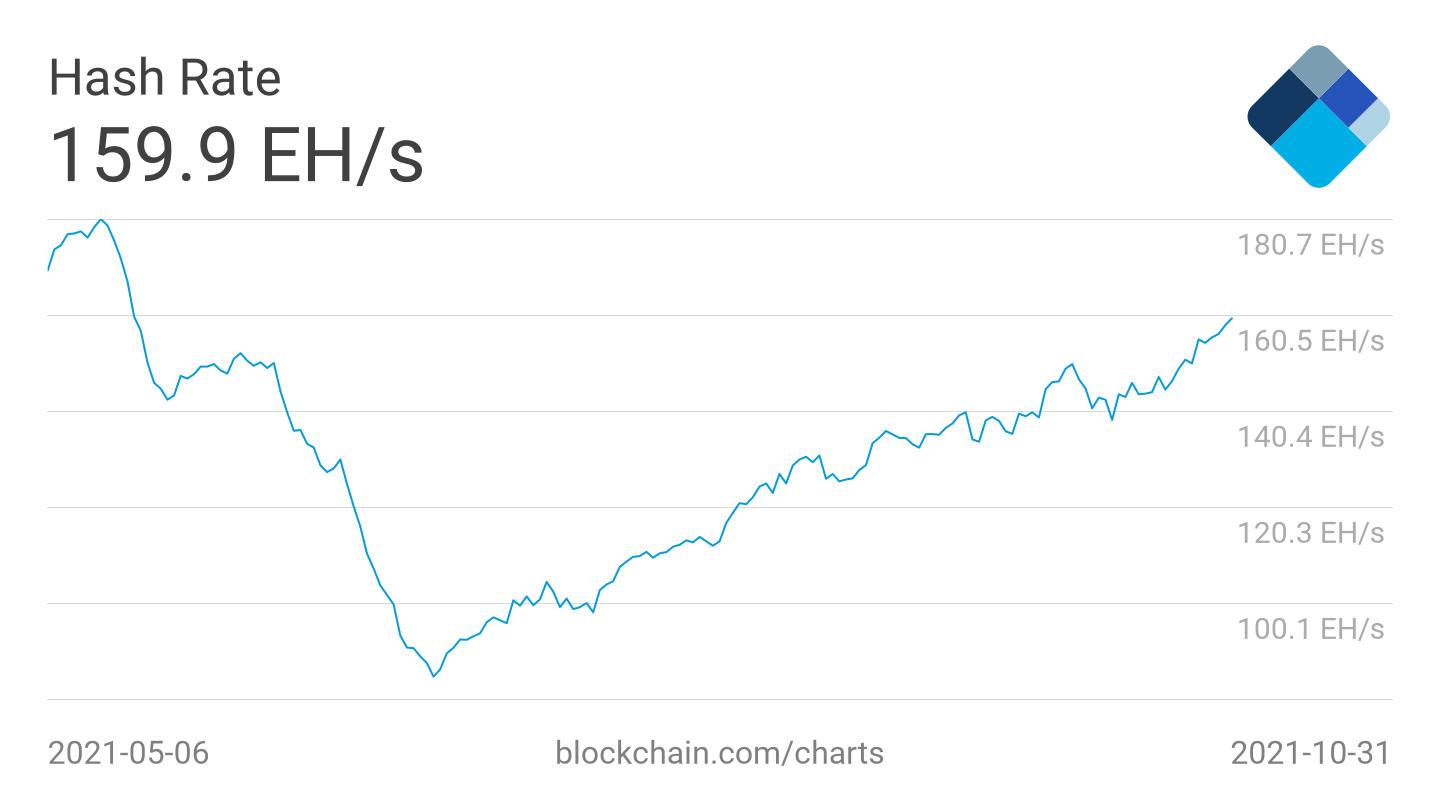 September provided a golden “buy the dip” opportunity for Bitcoin buyers, and October was likewise not without its brief retracements.

Did you buy the dip? If you did, you added to the increasingly strong cohort of long-term hodlers whose conviction has only increased in October.

As noted in research from major exchange Kraken last week, the price gains and run to $67,100 all-time highs have failed to tempt hodlers to sell BTC.

“Notably, while long-term holders were unfazed by the retracement last month and used it as an opportunity to continue accumulating, this trend has not changed despite a significant rebound in price to new all-time highs near $67,000,” researchers concluded.

“In other words, the supply shock bought by long-term holders last month has only grown stronger this month.”

It is these entities, rather than short-term speculators, who are driving price performance in Q4 this year, they add.

This chimes with previous analysis, notably by analyst Willy Woo, showing that the so-called “hodlers of last resort” or “Rick Astley” investors remain committed to their investment. Among the long-term holders, since 2020, are miners themselves.

“Since 2020 miners have been HODLers (and buyers) of BTC, this is a sea change in behaviour,” Woo noted this weekend.

“Miners have not been in sustained accumulation behaviour since the 2009-2014 era.” 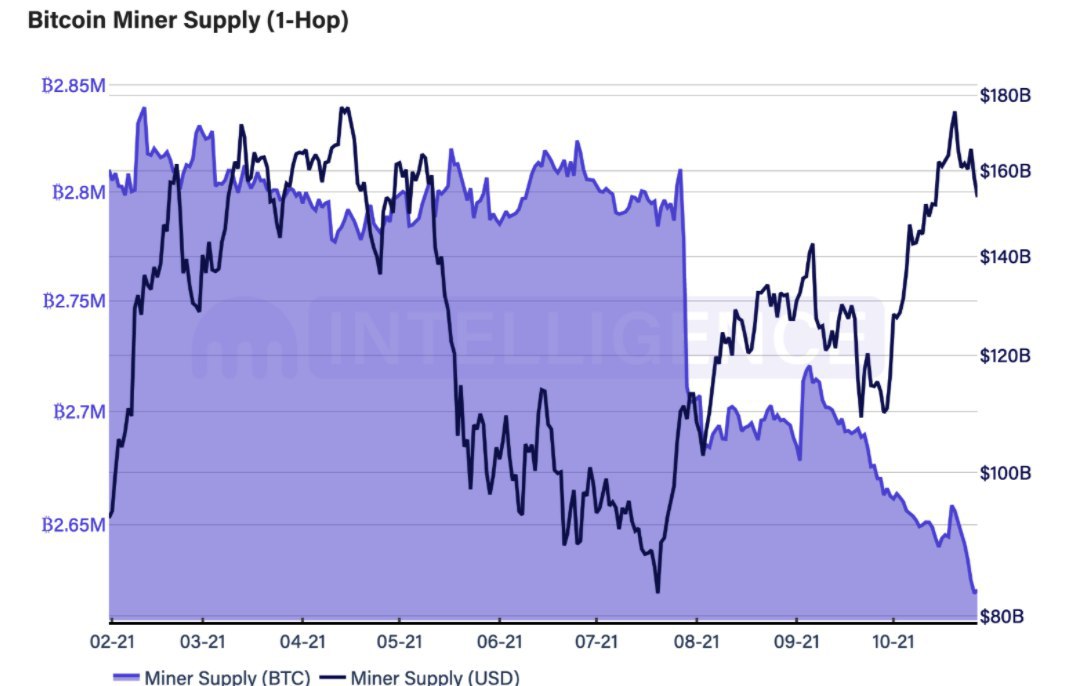 On the topic of supply shock, the picture from exchanges is grim — from the perspective of a Bitcoin bear.

According to fresh data from on-chain analytics firm Glassnode, exchange BTC reserves are now at their lowest in three years.

At that time, in late 2018, Bitcoin was heading into the pit of its previous bear market, one which bottomed out in December at $3,100.

Since then, price action has changed by an order of magnitude, but balances are still dwindling — all pointing to the scale of the potential shock should demand increase heavily from here.

Exchanges now control 2.47 million BTC, while at its peak in April 2020, over 3.1 million BTC stood on their orderbooks. 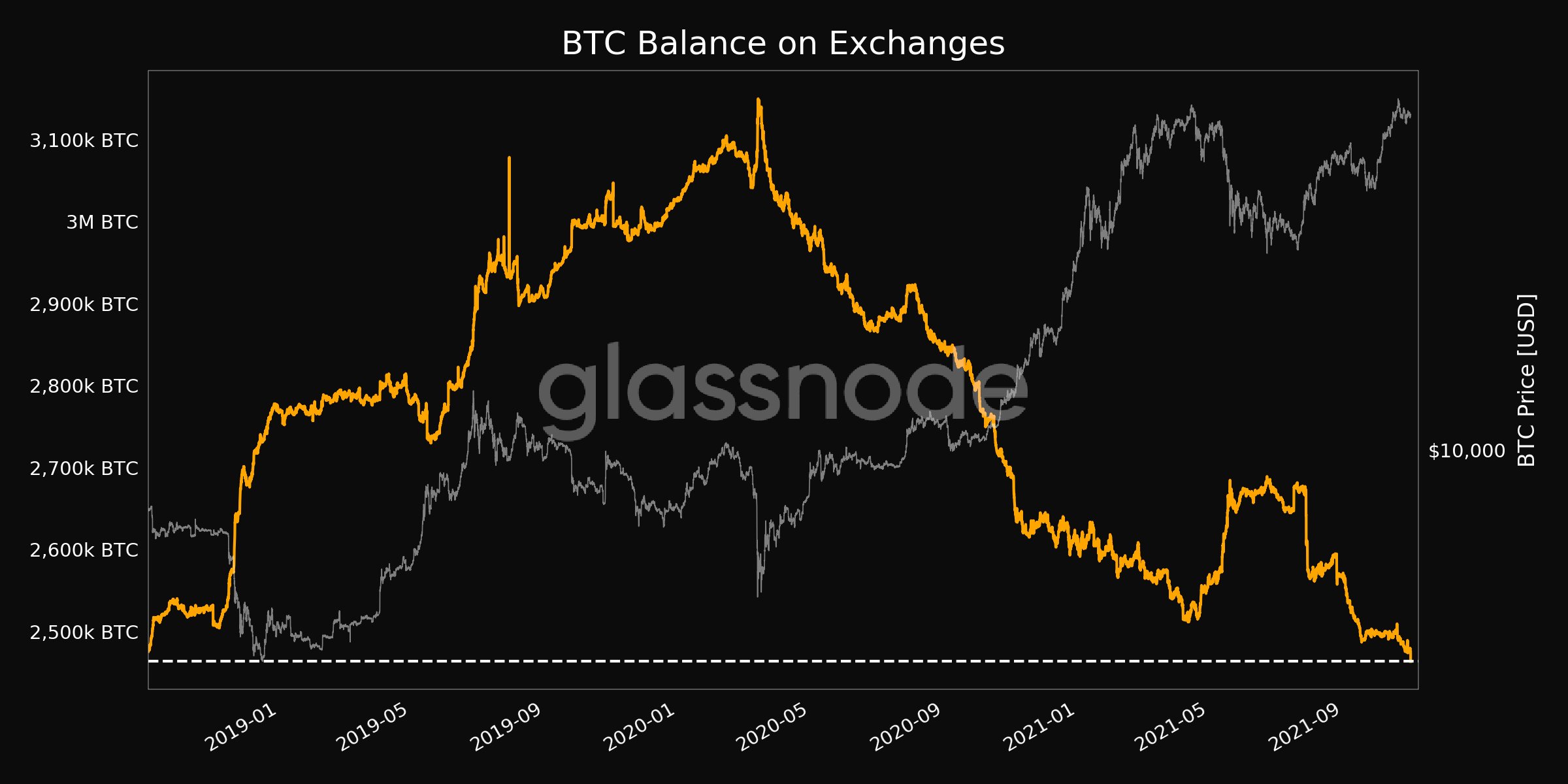 Balance changes can vary considerably between exchanges. Over the past 24 hours, for example, Coinbase Pro led the decrease, down almost 20,000 BTC, while some other players saw slight increases in their balance.

The coming week could produce some familiar trends on traditional markets — and their traditional knock-on impact on crypto markets.

These could come thanks to fresh comments from the United States Federal Reserve on coronavirus management Tuesday and Wednesday, as markets expect further cues on asset-buying tapering.

This comes as inflation ramps up worldwide, while Fed Chair Jerome Powell previously admitted that the accompanying narrative — supply chain crisis — will likely persist “well into next year.”

“I think the Fed has pretty well determined to start the taper pretty quickly. We expect them to announce it next week and then start it soon thereafter, so that’s pretty well carved in stone,” Kathy Jones, chief fixed income strategist at Charles Schwab, told Yahoo Finance last week.

“I think the big debate now is how quickly the Fed moves toward actually raising rates. The expectation in the market has really shifted to expecting as many as two rate hikes in 2022 and 2023… that’s a pretty aggressive pace of tightening.”

Such conditions serve to increase Bitcoin’s attractiveness as an inherently deflationary asset class with a mathematically-verifiable supply cap. 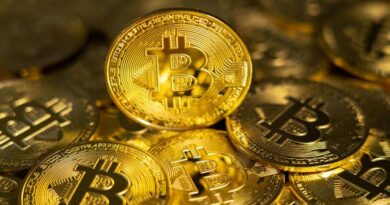 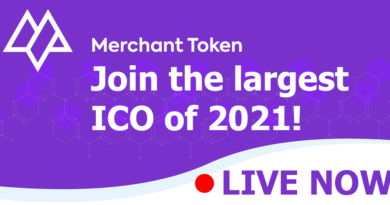