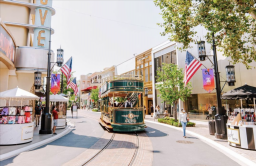 Three suspects are in police custody today after they were arrested in connection with a reported smash-and- grab robbery at the Grove. Other suspects remain on the loose. It’s the latest in a string of smash-and-grab looting incidents targeting upscale stores in Los Angeles and San Francisco.

Police said they believe the suspects were part of a group of at least 20 people who allegedly robbed a Nordstrom’s store at the popular retail and entertainment complex in the Fairfax District just before 11 p.m. Monday.

The robbers at the Grove used a sledgehammer and assorted tools to smash one of the department store’s windows and reportedly took several items of men’s clothing, police said. At least four cars sped away from Nordstrom’s as LAPD patrol cars responded to the burglary call.

NBCLA reporter Robert Kovacik posted close-up photos of the damage, and a sledgehammer left nearby.

One group of suspects led police on a freeway chase and foot pursuit through South Los Angeles, using the Santa Monica (10) Freeway and the Harbor (110) Freeway as their getaway routes before exiting the 110 at Manchester Avenue at approximately 11:06 p.m. Monday, said Los Angeles Police Department Officer Drake Madison.

Police then created a perimeter and began a foot pursuit of the suspects in the area near Hoover Street and Vermont Avenue. Officers recovered several items of clothing, a cash register and gloves from a Nissan SUV, which they believe is the suspect’s vehicle.

It was not immediately known if the arrested suspects were part of the police pursuit, Madison said.

Police installed barbed wire today just outside the Grove where the robbery took place. The broken windows at Nordstrom’s were boarded up, according to the L.A. Times.

The incident follows a similar mass robbery at a San Francisco-area Nordstrom’s on Saturday which allegedly involved 80 people. Additionally, on Friday night, San Francisco’s Union Square saw a string of incidents. The businesses hit included a Louis Vuitton store, a Burberry store, a jewelry store, a Bloomingdale’s, a Walgreens, cannabis dispensaries and an eyeglass shop, according to S.F. Police Chief Bill Scott via CNN.

Also very early Sunday morning, the windows of Louis Vuitton and Saks Fifth Avenue in Beverly Hills were smashed, according to the Times, which also reported that “multiple suspects were seen traveling in several vehicles and that they ‘descended on the locations and used a sledgehammer to try to break through front windows.’”

Newsom also said, “These people are stealing a sense of place,” a statement that is especially true about the carefully-curated and seemingly very safe environs of the Grove.

The Grove is, of course, a popular venue for industry screenings and events. Apple CEO and Tim Cook and the cast of Ted Lasso were there just last week to open the new Apple store.

Who’s A Good Boy? ‘Clifford The Big Red Dog’ Getting Sequel From Paramount