Home » Business » Anti-woke activists love to champion free speech, but many are pushing for new laws that would ban 'bad' ideas from public trainings 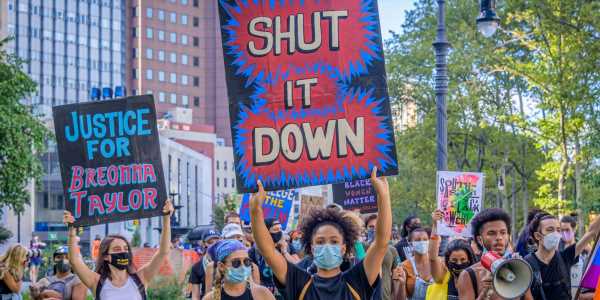 A few years back, I wrote an essay warning that campus speech codes ostensibly designed to stamp out bigotry would ultimately be deployed against marginalized groups. (That prediction has since been proven correct.)

My argument was that authority is not the friend of the oppressed. Whatever powers you demand faceless administrators exercise on behalf of a just cause will eventually be used to the benefit of your ideological enemies sooner or later.

So while it might be infuriating to do so, the most effective way to maintain civil liberties is to ensure basic rights are extended to as many people and types of speech as possible — even if that includes speech from some of the truly “bad guys.”

Some people “might not ‘deserve’ free speech, but they are entitled to it. Rights are not earned by the righteousness of one’s values. They’re just rights,” I wrote a few years back.

The right to express unpopular ideas has been one of the effective weapons in every civil rights movement’s arsenal. Without the robust defense of free speech despite overwhelming objections, there’s no Voting Rights Act, there’s no gay marriage, and there is certainly no antiwar movement.

Likewise, the ACLU’s famous 1978 legal defense of Nazis’ free speech rights was not an endorsement of their viewpoints, but rather a defense of the right to express unpopular (or even vile and wrong) ideas so long as they are not an incitement of imminent violence.

Over the past few years it’s been a hard road-a-hoe convincing left-leaning friends, colleagues, and readers that free speech is their friend and “The Man” is not.

On the other hand, conservatives, libertarians, and various squishy centrists — by contrast — have in recent years typically been receptive to the basic concepts of free expression and open inquiry.

But in practice, some of these supposed defenders of free speech have shown themselves to be, as I’ve previously called them, “free speech tourists” — proving that despite their loud claims to the unbending defense of free speech, they come with some glaring exceptions to it in practice.

The latest case exposing the weakness of this commitment is a fight over Critical Race Theory (CRT), which has led some free speech “warriors” to concede that some ideas are, in fact, too dangerous for public discourse.

For the uninitiated, CRT is a nebulously-defined term borne in academia which the American Bar Association describes as a critique of “the social construction of race and institutionalized racism perpetuate a racial caste system that relegates people of color to the bottom tiers.”

Its most strident critics liken CRT to “toxic wokeness” or “anti-Americanism” or “neo-racism.”

There are legitimate arguments to be had about the righteousness (or even the coherency) of Critical Race Theory. But some in the anti-woke brigades — who typically fashion themselves as indefatigable champions of free expression — have been all too quick to embrace legislation that would effectively ban ideas associated with CRT they find problematic from public K-12 schools, universities, and trainings for public employees.

Those CRT critics have cited civil rights and anti-discrimination statutes to back up their assertions to argue that it’s not censorship because the ideas being banned are “bigoted.”

But the anti-CRT bills winding their ways through a number of state houses are written (surprise!) with overbroad language, and if implemented would end up chilling speech far beyond their supposed intent.

Anti-racism, anti-wokeism, and free speech under assault from all sides

The fight has also come to schools, where the incredibly complex issue of if, when, and how to address systemic racism with students is being flattened into an “us and them” binary by partisans on both sides.

Proponents of CRT argue that to truly eradicate racism in America, we need to start young, real young, like three months old.

Meanwhile, critics of CRT dismiss it out of hand as a “neo-racist” philosophy that pre-judges people by their immutable characteristics. The real-world example of 3rd graders being compelled to self-denounce their “whiteness” in front of their classmates has understandably raised objections from many parents. (In most states, K-12 teachers and students have few First Amendment protections.)

As will happen in any “war,” culture war combatants maximize the threat to justify the severity of their response.

Critics of CRT literally see antiracist philosophies as a threat to Western civilization. In doing so, they’re letting their culture war panic get the better of them.

Just as antiracist arguments can be overbroad, and deserve to be scrutinized to their fullest extent, so too are the legislative challenges to antiracist ideas being adopted in public settings.

In Arkansas, Iowa, Mississippi, Missouri, and South Dakota, Republicans are pushing bills that would cut funds to any public school that uses The New York Times’ controversial Pulitzer Prize-winning “1619 Project” — which argues that every cultural and economic aspect of America can directly be traced to slavery — as part of its curriculum.

Georgia state university employees are being asked if they’re teaching the concept of “white privilege,” after a Republican legislator requested an inquiry. Some professors have described a subsequent chilling effect on such conversations.

A bill in New Hampshire would ban discussion that posits the United States is fundamentally racist or sexist.

In Iowa, a Republican-proposed bill would require university employees to submit to a survey of their political beliefs, while another bill would ban “divisive concepts” from being taught in universities.

Let’s examine how a ban on “divisive concepts” would look in practice.

Take abortion, one of the most divisive issues in this country. To argue either side of the issue is to inherently be “divisive.”

Ditto for the Israel/Palestine conflict. It’s unimaginable that a discussion on Middle East politics could not be considered “divisive” and therefore disallowed in the classroom.

And how about America’s foreign policy? Any discussion of the US’ colonial misadventures could be verboten under the “divisive” clause.

See how easy it is for blunt legislative solutions to make undesirable situations worse?

The examples of overarching “anti-woke” legislation go on and on and on. And they go well-past Critical Race Theory, such as the bill in New Hampshire that would ban public employees from even taking part in discussions that the United States is fundamentally racist or sexist.

It’s almost like advocates of anti-CRT legislation have never heard of a “slippery slope.”

Everyone has the right to be wrong

“Faculty aren’t required to always be right. They’re human like everyone else,” Joe Cohn, the Legislative and Policy Director at the non-partisan Foundation for Individual Rights in Education (FIRE) told me.

Cohn said many of the bills moving through state legislatures are mostly unnecessary “since we already have robust anti-discrimination laws to prevent institutions themselves from creating hostile environments.”

“The First Amendment allows people to make arguments, and not all of them will end up holding water,” Cohn added.

Acadia University lecturer Jeffrey Sachs, a left-leaning advocate for free speech rights in academia, recently wrote that he shares some concerns about the excesses of “the lunatic left-wing professor who rails in class against ‘whiteness’ and declares all men sexist.”

But, Sachs warned, “I guarantee that if these bills ever become law, the Left will deploy them against the Right just as frequently as the Right will against the Left.”

It can’t be stated more plainly than that.

If Critical Race Theory, in practice, creates a hostile environment, use the legal protections already available. But you can’t legislate ideas out of existence on the basis of simple disagreement.

One of the free speech movement’s most oft-repeated (to the point of cliche) mantras is the counterspeech doctrine argument, articulated by former Supreme Court Justice Louis Brandeis:

“If there be time to expose through discussion, the falsehoods and fallacies, to avert the evil by the processes of education, the remedy to be applied is more speech, not enforced silence.”

In other words, the way to defeat “bad” speech is with more speech.

These people left their jobs behind to retire early — then life got in the way. Here’s how they coped with FIRE plans gone wrong

Here's how the strike affects GM workers and profits