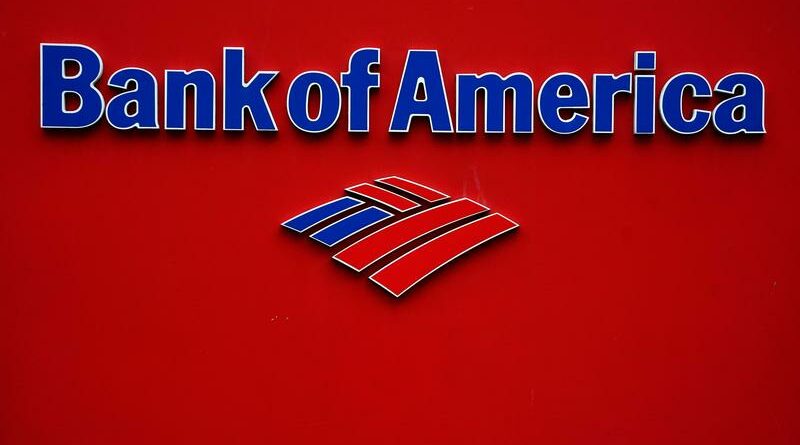 -Bank of America Corp offered a sunny forecast for its mainstay lending business on Wednesday as the second-largest U.S. bank blew past analysts’ estimates for second-quarter profit.

The lender’s profit nearly tripled as it unloaded $2.2 billion of loss reserves in the quarter, but low interest rates weighed on lending profits even as the bank pointed to an improving demand for loans in a recovering economy.

Analysts view Bank of America as the most sensitive to interest rate moves among U.S. banks because of its balance sheet makeup.

For years, the bank has tried to adjust the way it invests in Treasury bonds and other securities to prepare for rate movements, but the timing of rate movements has been all but impossible to predict due to a long economic recovery after the 2008 crisis and, more recently, the global pandemic.

However, with the economy starting to sprint out of the slowdown, Bank of America pointed to a growth in its net interest income, or the measure of how much lenders can make on the difference between what they earn from loans and pay out on deposits.

“We have been able to hold NII (net interest income) relatively flat. We expect it to grow higher … driven primarily by loan growth,” Chief Financial Officer Paul Donofrio said on a call with reporters to discuss earnings.

For the second quarter, however, the bank’s NII plunged 6% to $10.2 billion, sending its shares down 2%.

The Federal Reserve has begun discussions on tapering easy-money policies, with policymakers bringing forward their forecasts for raising interest rates to 2023 from 2024.

Fed Chair Jerome Powell will begin two days of testimony to U.S. lawmakers later on Wednesday where he is expected to face questions over inflation. [L1N2OP16M]

“We are hopeful that the Fed is right about inflation,” Donofrio said on the call with reporters.

“We’re not traders or a hedge fund. We are deploying our excess liquidity in a prudent way over time and we are always balancing our need to have liquidity.”

Over the past year, the bank has nearly doubled the total debt securities on its balance sheet to $940 billion in the second quarter from $472 in the same period last year.

JPMorgan rates analysts expect the yield curve to steepen over the next year, with longer-dated yields rising faster than shorter ones, according to their July 9 report.

A steeper yield curve bolsters lenders, which borrow at the short end of the curve and lend long.

Bank of America’s own analysts expect Fed Funds rates to remain unchanged as 10-year Treasury bond yields rise over the next year.

While loan growth is still tepid as capital markets remain flush with liquidity, there are signs demand is coming back.

Average loans and leases across all segments were down 11% from last year, but up $1.8 billion from the previous quarter, signaling a nascent recovery.

“We are starting to see a turn in loan growth,” Donofrio said.

The bank reported a 173% jump in net income applicable to common shareholders to $8.96 billion, or $1.03 per share, comfortably beating the average estimate of 77 cents per share, according to IBES data from Refinitiv.

Executives at JPMorgan Chase & Co warned on Tuesday that the sunny outlook for the U.S. economy would not make for blockbuster revenues in the short term due to low interest rates, weak loan demand and a slowdown in trading.

Shadow Banks Are Riding Out the Crisis While Virus Ravages India