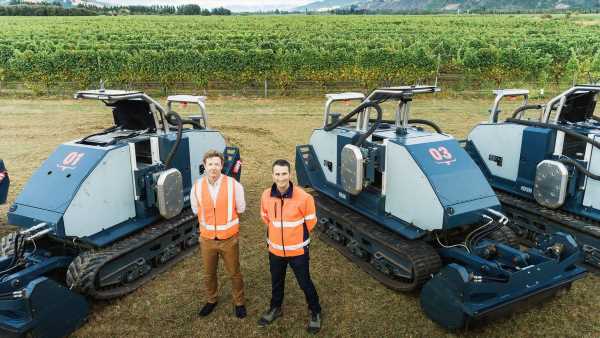 “Robots don’t have bad days, they don’t get tired at the end of a 10-hour shift and potentially make mistakes.”

Smart Machine chief executive Andrew Kersley would be a fan of automation. His three-year-old company has developed the Autonomous Vineyard Tractor or AVT, billed as a world-first – that is currently being tested by Stoneleigh and several other vineyards around Marlborough. It can take care of mulching, leaf removal and trimming, and also features an array of data-gathering sensors.

But he’s not trying to minimise labour so much as maximise the output of the scant number of people who do arrive in the region for seasonal work.

Kersley and his cofounders Nick Gledhill and Walter Langlois created Smart Machine in response to the viticulture labour shortage.

Two, four or more AVTs can be controlled by a nearby human, toting a tablet.

Kersley says while others have gone “big and wide” with machines that can tend to three rows of grapes at once, “there’s a danger of losing touch at the plant level” with that approach. Plus, there’s much less ground compaction than with monolithic gear, and the AVTs are billed as more fuel-efficient than traditional tractors.

Each features 80 sensors, controlled by artificial intelligence software, that handle everything from navigation to safely avoiding unexpected obstacles to measurements of vine quality.

The four pre-production AVTs were made by local engineering workshop Machinery Services – owned by Langois – with the AI system, dubbed “Oxin”, created in cooperation with Callaghan’s research and development wing.

Smart Machine will shortly open a 600sq m facility and start production on five more AVTs, for a fleet of nine.

Kersley is hoping for a commercial launch in summer or spring next year. Smart Machine has yet to settle on a financial model; it could sell or lease the AVTs.

Forget romantic images of people tending to grapes by hand. The AVTs are designed for large-scale harvests and will be replacing processes that are already mechanised.

The cost of each AVT will be “somewhere more than one tractor but less than two tractors”, Kersley says. He’s keenly aware that smart machines will have to be cheaper than the more traditional people-driven hardware it replaces. He sees AVTs achieving that aim through the efficiencies of working more hours and being controlled by fewer people, and via their data collection smarts.

Pernod Ricard is a heavy-duty partner. The French multi-national is the world’s second-largest spirits and winemaker, and in our part of the world its labels include Stoneleigh, Brancott Estate and Church Road, as well as various vineyard operations.

Pernod Ricard Winemakers’ transformation director Alex Kahl says his company considers the AVT’s AI as an example of “The fourth industrial revolution. We’re proud to support viticultural in New Zealand taking big ideas from around the world to build our local industry.”

In terms of the future, Pernod Ricard is working with Smart Machine to continue to develop the AVTs and see how they can build on this technology which is already world-leading and the most advanced of its kind, Kahl says.

“Pernod Ricard is continuing to invest in the technology so that it can be developed further as Smart Machines looks to expand their fleet.”

Innovation is becoming increasingly important, so the company’s focus is on making sure its vineyards are future-fit so that they can remain competitive, efficient, sustainable and safe, he says.

After Discussion With Trump, Lockheed Martin Plant in Pennsylvania Will Stay Open