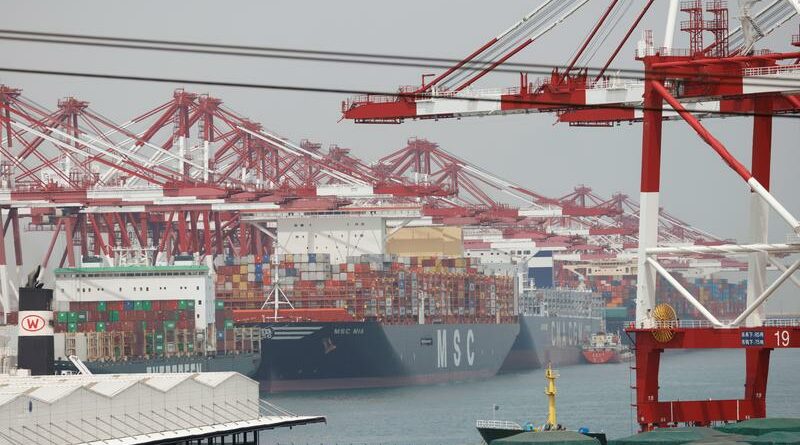 Although the statistical base effects of sharp declines from a year ago are seen keeping headline trade numbers attractive, real demand has also made a significant recovery in recent months.

Exports are expected to have risen 23.1% in June from a year earlier, according to the median forecast in a Reuters poll of 15 economists, compared with a 27.9% gain in May.

China’s commerce ministry said on Friday it expects trade in goods to grow by 2% per year over the 14th five-year plan period from 2021 to reach $5.1 trillion in 2025.

“The local outbreak of Covid-19 and related virus control measures in the Guangdong province caused delays around ports in Shenzhen and Guangzhou,” said analysts at Goldman Sachs in a note. “This may have cut 2-3pp trade growth in June in our view. On the other hand, global demand stayed solid and continued to support export growth.”

A measure of U.S. factory activity climbed to a record high in June, while Euro zone business growth accelerated at its fastest pace in 15 years.

However, exporters are grappling with higher raw material and freight costs and logistics bottlenecks.

There are signs that production bottlenecks are beginning to ease in Asia, said Frederic Neumann, an economist with HSBC, in a note. But “that won’t provide imminent relief: manufacturing elsewhere still appears tight, and there are still transportation ripples that need to be dealt with,” he said.

Prices for commodities such as coal, steel, iron ore and copper have surged this year, fuelled by easing pandemic lockdowns in many countries and ample global liquidity.

China’s factory gate inflation eased in June after a government crackdown on runaway commodity prices, but the annual rate stayed uncomfortably high and underlined growing strains on the economy as Beijing tries to bolster a post-coronavirus revival.

And a private survey showed activity in the country’s factories expanded at a softer pace last month, as the resurgence of COVID-19 cases in the export province of Guangdong and supply chain woes drove output growth to the lowest in 15 months.

The trade surplus is expected to be $44.20 billion in June, narrowing slightly from $45.54 billion in May, the poll showed. The data will be released on Tuesday.